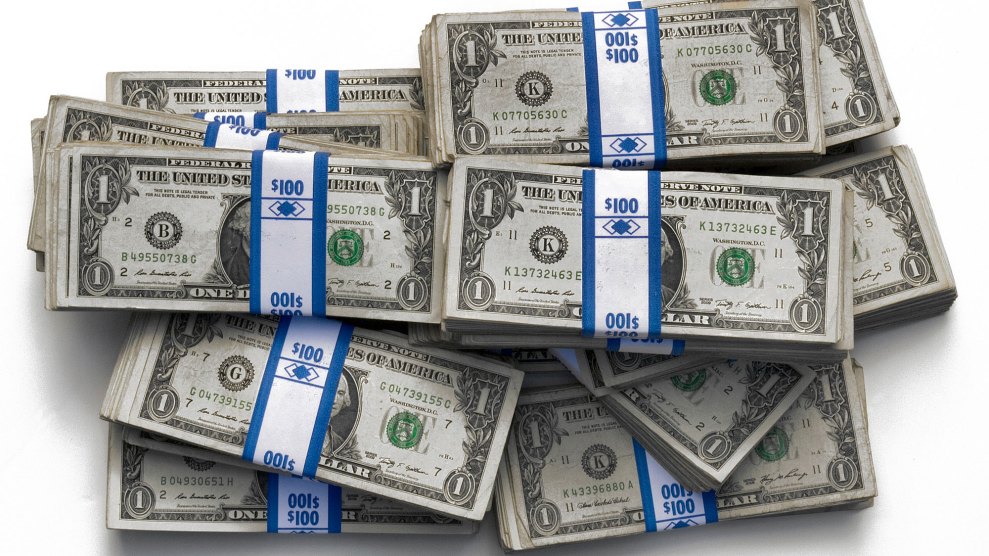 It would be incorrect, at this point, to call ActBlue Democrats’ secret weapon—there’s nothing secret about it. The Democratic fundraising platform, founded 14 years ago as a way to facilitate small-dollar online giving, has directed more than $1 billion to Democratic candidates this cycle. More than any other online tool, it has powered a “green wave” of progressive fundraising and helped candidates for the House and Senate—including first-time candidates who entered politics without a well-established local donor base—out-raise long-tenured Republicans in dozens of races. Beto O’Rourke, Randy Bryce, even Heidi Heitkamp—they’ve all benefited from a simple tool that lets supporters give a few bucks with just a few clicks.

ActBlue is technically a PAC, but it doesn’t work like one. You could think of it instead as sort of like PayPal for politics. Rather than collecting money from donors into a centralized pot and then disbursing it in large sums to candidates the PAC supports—the way most PACs work—ActBlue simply directs donors’ money where they want it to go. So donations via ActBlue are not PAC donations in the traditional sense; they’re individual donations that have been processed through ActBlue. “We provide the infrastructure for campaigns and organizations to fundraise online, but we don’t fundraise on behalf of anyone,” is how the group puts it. And campaigns love it, because ActBlue is really good at it. As we explained in an article last year:

ActBlue works with candidates at the local, state, and national levels—from school board races to presidential campaigns—to squeeze every dollar out of their email fundraising pleas or the ubiquitous “Donate” button on their websites. Engineers streamline the process of giving to a campaign or cause. They toy with typefaces, reduce load times, and adapt the product to all devices and operating systems. Like an Olympic sprinter in training, ActBlue obsesses over shaving off every millisecond. “If you want people to take action,” says Erin Hill, ActBlue’s executive director, “you need to make it incredibly easy for them to do it.”

That there’s no comparable tool on the right has been a subject of concern among conservatives for a long time. Since at least 2007, Republicans have talked about building their own ActBlue. Various efforts to do so have been tried and, for various reasons, have failed. But maybe the reason Republicans don’t have their own ActBlue is that they don’t even seem to know what it is.

Over the last few months, as Democratic candidates haul in increasingly large sums of cash via the fundraising platform, their opponents have struggled to turn ActBlue into a political bogeyman through a series of false claims about who uses it and how it works. They have described it as a leftist special interest group and as a way to launder illegal donations from foreigners. Most ominously, some conservatives have used it to inflame conspiracy theories about the liberal philanthropist George Soros, who was recently the target of an attempted pipe bomb attack.

Rep. Pete Olson (R-Texas): Locked in a tight reelection battle with Democrat Sri Preston Kulkarni, Olson warned supporters at a recent campaign event that his “Indo-American” opponent was using the platform to raise illegal donations from overseas. “Somehow, the other side has arranged for people to send money to this group in Massachusetts, to send it all across the country,” he said. “You can find out where it came from, but you have to work hard to find out who gave that money. Now, I guarantee you a lot of that money isn’t coming through legally. It’s coming from overseas or coming way above what’s allowed.” Olson had no evidence to support his accusation.

Rep. Dave Brat (R-Va.): At his October 15 debate with Democrat Abigail Spanberger, Brat accused his opponent of taking “millions and millions of dollars…from Nancy Pelosi and every leftist group, including ActBlue. Please go research these groups—they are trying to buy this election, they have their candidate to put in place the failed agenda of Nancy Pelosi.” Brat was making a common mistake in describing ActBlue as a group, rather than simply a credit card processor.

But perhaps it wasn’t a mistake. In an interview with Breitbart News a few days later, he falsely linked ActBlue—again, we’re talking about a credit card processing platform here—to Soros, and in turn, to Antifa activists in Oregon. ActBlue was a “George Soros resistance group,” Brat said. “That’s not even Democrat. This is the group that’s doing the riots in Portland. That’s promoting violence and mobs instead of jobs, that the president has been talking about every night.”

Diane Harkey (R-Calif.): Harkey, the Republican choice to succeed retiring Rep. Darrell Issa, attacked her Democratic opponent, Mike Levin, for taking “over $3 million from Code Blue [sic].” The implication from candidates like Harkey is that ActBlue is the organization giving millions of dollars to help Levin—sort of like a super-PAC. But that’s not what ActBlue is at all; again, it’s a conduit that grassroots donors can use to contribute to any candidate they want.

At last night’s debate, my GOP opponent (who is funded by the Koch Brothers, NRA, and corporations) tried to criticize me for receiving $3M from “Code Blue.”

Rep. Will Hurd (R-Texas): Facing a tough challenge from Democrat Gina Ortiz Jones, Hurd accused his opponent of taking more money from Massachusetts than from Texas. His source? Jones’ FEC filings, which showed she had received $581,000 via ActBlue. Hurd’s logic was that since ActBlue’s offices are in Somerville, Massachusetts, the money should be counted as coming from Massachusetts. But that’s not how it works at all. ActBlue is a conduit for donations from individuals across the country—most of whom aren’t from Massachusetts. In Jones’ case, much of the money she raised via ActBlue came from Texas.

Carol Miller, Republican congressional nominee in #WV3, is now warning darkly about "money coming in from something called Act Blue" in her race

Katie Arrington (R-S.C.): Arrington’s spokesman has accused Democrat Joe Cunningham of “being supported by hundreds of thousands of dollars of extreme-left, out of state, special interest groups”—a reference to Cunningham’s fundraising from ActBlue.

Rep. Steve Russell (R-Okla.): Give the man who captured Saddam Hussein this: He at least seems to understand the basics of what ActBlue is, even if he still thinks voters should find it shady. “We don’t have an ActBlue behind us that allows money to come from all over the country in small donations like she does,” Russell said of his opponent Kendra Horn. “That’s fine. It’s a free system. I’m not intimidated by it.”