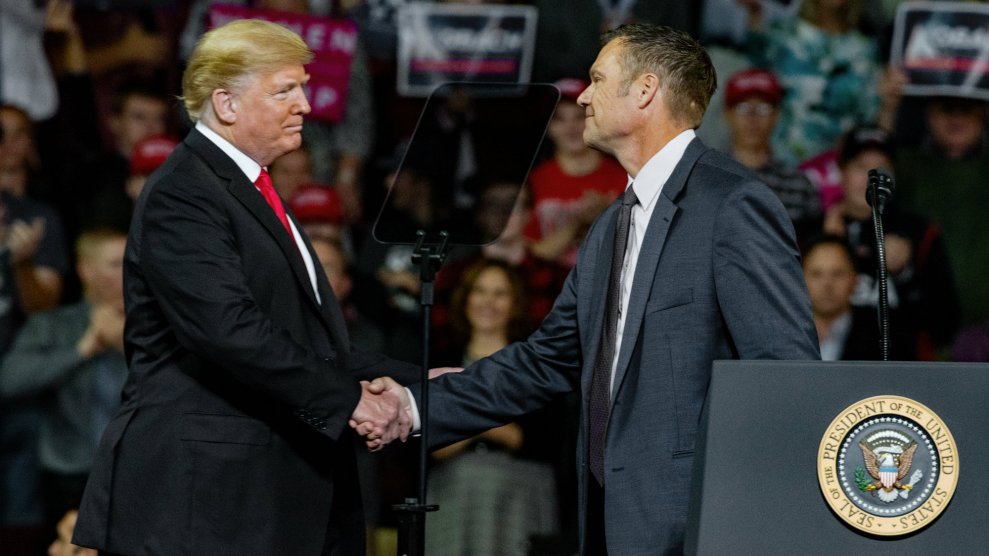 Donald Trump shakes hands with Kris Kobach, the Republican nominee for governor in Kansas, during a campaign rally.Mark Reinstein/Corbis via Getty Images

They survived scandal, a recall vote, even a papal admonition, but when the frenzy of the campaign became the clarity of Election Night, these frequent targets of liberal ire all found themselves defeated by a range of challengers.

Kris Kobach, the Kansas secretary of state who pioneered one of the most restrictive voting laws in the country, lost to Democrat Laura Kelly—an astonishing result in a state Donald Trump won by more than 20 points. As the official charged with overseeing elections, Kobach instituted a draconian “proof-of-citizenship” law that blocked 35,000 residents from registering to vote. Even when a federal court ruled it unconstitutional, Kobach “willfully failed to comply” with a court order to begin registering voters without the law’s strict requirements. He was held in contempt of court and ordered to take six hours of continuing legal education.

In Wisconsin, labor and education activists who have been dreaming for eight years of a statehouse without Gov. Scott Walker finally got their wish as he narrowly lost to Democrat Tony Evers, the state’s chief of education. During his tenure, Walker slashed funding for public schools, oversaw a catastrophic teacher shortage, and drastically reduced the influence of labor unions. On the news of his ouster, the AFL-CIO released just a six-word statement: “Scott Walker was a national disgrace.”

In Kentucky, Rowan County clerk Kim Davis—who rocketed to fame in 2015 for refusing to sign a same-sex marriage certificate—lost her reelection bid. Rather than enforce the Supreme Court’s decision to legalize gay marriage nationwide, Davis went to jail for five days on account of her Christian beliefs. She was respecting “God’s authority,” she said at the time. The decision made her a celebrity on the Christian right and led to an audience with Pope Francis and a book deal. (The pope was reportedly oblivious to the political context of Davis’ actions and he later fired the bishop who arranged the meeting with her.) On Tuesday, she fell short of reelection by fewer than 700 votes, losing to Democrat Elwood Caudill Jr.

Even Virginia’s 7th District, where voters have sent a Republican to Congress for the past four decades, finally had enough of Rep. Dave Brat, the former economics professor who rode a Tea Party wave to Washington in 2014 after ousting House Majority Leader Eric Cantor. Brat, a member of the far-right Freedom Caucus, lost to ex-CIA agent Abigail Spanberger in a decisive repudiation of Donald Trump. In 2016, he won the 7th District by more than 6 points.

Another domino in the Democrats’ quest to retake the House fell in Minnesota’s 2nd District, where queer businesswoman Angie Craig unseated Rep. Jason Lewis, a former radio host who denigrated women and people of color on his show. Two years ago, when Trump won the conservative-leaning district by 1.2 percentage points, Lewis narrowly edged out Craig. But his radio show provided an unrelenting source of news for outlets like CNN, which dug up countless incendiary comments from over the years. There was the time Lewis said black people have an “entitlement mentality,” or when he longed for the ability to call some women sluts again. (Lewis defended himself by saying, “I was paid to be provocative.”)

Seth Grossman, an unsuccessful GOP candidate for New Jersey’s 2nd District, was more overt in his ideas about race. Diversity, he said at a Republican forum, was “a bunch of crap and un-American.” On social media, he shared offensive memes about Muslims and posted stories by white nationalist Richard Spencer. One post he shared from a white supremacist website called blacks a “threat to all who cross their paths,” according to New Jersey Advance Media. Even the national GOP’s main fundraiser for congressional candidates disavowed Grossman, saying the National Republican Congressional Committee would withdraw their support for him. Grossman said in an email to CNN that, while some of his social media activity “may be offensive to some, I believe they were necessary to bring attention to important issues. I also believe them to be substantially true.”

The news was not all rosy for those who count on some kind of justice for the shameless and deceptive. Rep. Duncan Hunter (R-Calif.) and Rep. Chris Collins (R-N.Y.), each battling their own slew of federal criminal charges, appear headed for reelection. (Collins declared victory but his opponent, Nate McMurray, called for a recount early Wednesday morning as the race tightened.) Steve King, the Iowa congressman best known for cozying up to white nationalists and amplifying the voices of the fringe far-right, narrowly escaped a spirited Democratic challenger. And, Sen. Heidi Heitkamp (D-N.D.), who voted against Brett Kavanaugh’s nomination to the Supreme Court, lost to Republican congressman Kevin Cramer, who said Kavanaugh should not be disqualified as a nominee even if the allegation that he sexually assaulted Christine Blasey Ford were “all true.”

In New Jersey, Sen. Bob Menendez, a political survivor of the highest order whose federal corruption trial ended in a mistrial, crossed the finish line in a race that required an influx of money from the national Democratic Party. Even as Menendez evaded a criminal penalty, the Senate Ethics Committee said his behavior—which allegedly included helping a donor who steered gifts and money toward his campaign—”violated Senate Rules, federal law, and applicable standards of conduct” and “reflected discredit upon the Senate.”

Where these political icons go next is anybody’s guess. If Trump is in the market soon for another attorney general or secretary of homeland security, he may have some options.