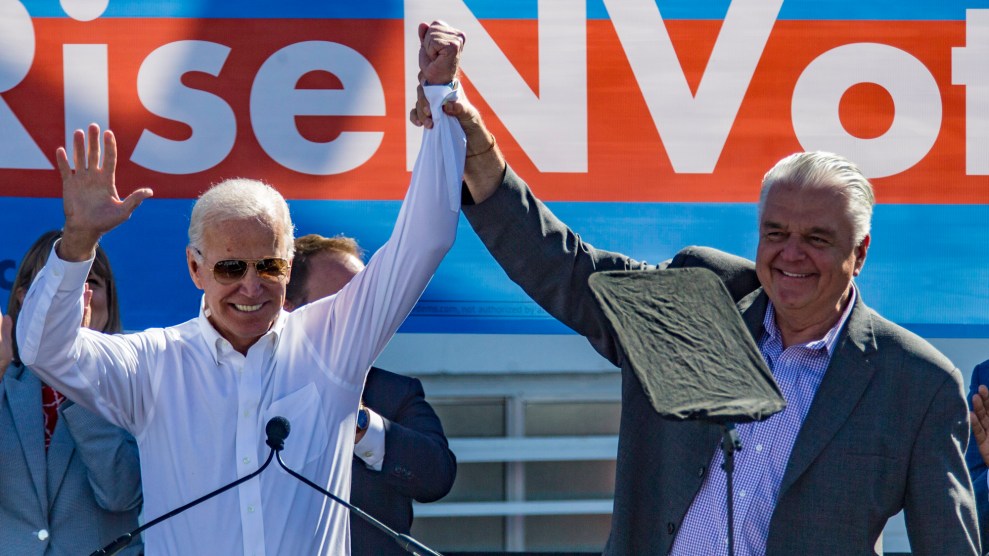 In a race that had been a toss-up in the polls leading up to the election, Steve Sisolak defeated Republican Adam Laxalt to become Nevada’s first Democratic governor in more than 20 years.

Sisolak, currently a member of the Clark County Commission, is the first Democrat to be elevated to the Nevada governor’s mansion since 1994. With strong support from the culinary workers’ union, Sisolak managed to bring out enough voters in urban Clark County around Las Vegas to cancel out strong Republican turnout in rural areas in Washoe County around Reno.

His opponent comes from a storied Nevada political family. Currently the Nevada attorney general, Laxalt is the grandson of former Nevada governor and US senator Paul Laxalt and the illegitimate son of the late Sen. Pete Domenici (R-N.M.).

Laxalt’s first job in politics was working for John Bolton, then an undersecretary of state for President George W. Bush. Bolton now works for President Donald Trump, who endorsed Laxalt over the summer. Laxalt campaigned to the right of incumbent Republican governor Brian Sandoval, with whom he has disagreed on a number of issues while serving as attorney general. Sandoval declined to endorse a candidate in the race to replace him.

In October, a dozen members of Laxalt’s family wrote an op-ed in the Reno newspaper, urging voters to reject his candidacy based on his “phoniness” and his position on immigration. They accused him of lacking Nevada roots and a real understanding for the state, which he moved to only about a year before running for attorney general. (Laxalt grew up in the DC area and went to Georgetown University.)

Laxalt has also steadfastly aligned himself with the National Rifle Association, even in the wake of the Las Vegas mass shooting, which left 59 people dead last October. After the shooting, Laxalt refused to endorse any gun control measures and said he thought it was important to “slow down” on such calls. The gun control group Everytown for Gun Safety’s political spending arm responded by committing $3.5 million to help get out the vote for Sisolak, who made gun safety a part of his campaign platform.*

In March, Ryan Bundy, son of controversial rancher Cliven Bundy, entered the race as an independent. Republicans feared that Bundy, who was polling at around 4 to 6 percent before the election, would siphon enough votes from Laxalt to throw the race to Sisolak. Bundy garnered less than 2 percent of the vote, mostly in rural areas, and not enough to significantly impact the race. Republican political consultant Chuck Muth, a former executive director of the Nevada Republican Party, predicted last week that this would be the case. “He’s got name recognition and certainly has sympathy for what he went through,” he told Mother Jones. “However, when people go to the polls, they may have a sentimental attachment to a candidate, but when they look at the hard reality, a lot of those rural voters, in the privacy of the voting booth, they’re not going to vote for him.”

Correction: An earlier version of this article misidentified the origin of Everytown for Gun Safety.