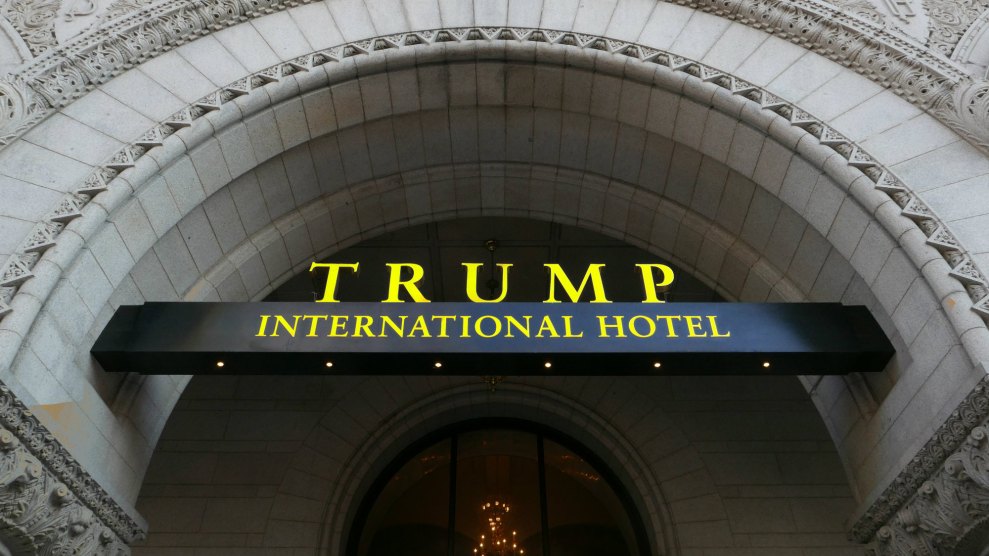 For nearly two years, cases accusing the president of violating the emoluments clause of the Constitution—which bars top officeholders from receiving financial benefits from foreign governments—have crept through the federal court system, but a significant turning point came on Friday afternoon, when a federal judge ruled President Donald Trump must produce documents about the inner workings of his Washington, DC, hotel. The ruling came as part of the discovery process in a case brought by attorneys general from Maryland and Washington, DC. These records would include balance sheets and evidence of how Trump’s employees handle business from foreign governments that may be seeking to influence the president by patronizing one of his landmark properties. It would also lay bare how much money from his hotel businesses winds up in Trump’s pocket.

The emoluments clause prohibits federal officials from accepting gifts from foreign governments. It was initially drafted with bejeweled snuffboxes gifted by foreign princes in mind, but ethics experts say the obscure provision also applies to foreign governments spending money at Trump’s many businesses. While Trump and his government attorneys have managed to stall an emoluments case in New York, the ruling Friday afternoon by a Maryland judge focused on Trump’s Pennsylvania Avenue hotel, which has become a clubhouse for conservative politicians and foreign dignitaries hoping to curry favor with the president.

A conclusion in the Maryland emoluments case—or any of the several other ones—may be years away, but a decision to allow the discovery process to go forward is potentially enormously damaging to Trump—politically and personally. The plaintiffs in the case are arguing that Trump’s hotel is being paid substantial sums of money by foreign governments—amounts significant enough to potentially affect the president’s decision-making process. Practically speaking, Trump’s continued ownership of the hotel, along with the lack of any transparency on how the hotel operates, means a foreign government—or anyone else—who wanted to put money in Trump’s pocket has an extremely easy way to do it. The act of booking a block of hotel rooms or a ballroom at a Trump property would be, in effect, a personal payment to the president.

As part of the discovery process, the plaintiffs have asked for details on how much money the hotel has made, how much came from foreign governments, and how hard the hotel worked to attract foreign business. The plaintiffs also want intimate details concerning the corporate structure of Trump’s hotel business, how much money he earns from hotel operations, and how Trump has managed the relationship between his hotel and its landlord—the federal government, which owns the historic building the hotel is housed in.

Trump has always been loath to discuss exactly how much money his businesses make and has adamantly denied any need to unload his ownership in them. Shortly before his inauguration in January 2017, Trump said he had placed the management of the company in the hands of his adult sons and a longtime executive, but since then, his company has been unwilling to discuss how it is attempting to avoid conflicts of interest.

Anecdotally, foreign governments have flocked to patronize Trump’s DC hotel. An Asian diplomat told the Washington Post, “Why wouldn’t I stay at his hotel blocks from the White House, so I can tell the new president, ‘I love your new hotel!’? Isn’t it rude to come to his city and say, ‘I am staying at your competitor?'” And in January 2017, days after Trump took office, nearly 100 foreign diplomats partied in one of its ballrooms while Kuwait moved its annual National Day celebration from the Four Seasons to Trump’s DC hotel. In a May 2017 filing under the Foreign Agent Registration Act, the government of Saudi Arabia reported spending $270,000 renting rooms at Trump’s DC hotel.

Trump said he would donate any profits from foreign governments patronizing his hotels to the US Treasury, and in February, he did donate $151,000, but instructions the Trump Organization has given to employees about how to segregate foreign profits were decidedly vague and suggested enormous loopholes. For instance, hotel employees were instructed not to inquire about whether a guest represented a foreign government if it might detract from the guest’s experience. And calculations of how much money should be donated were to be based entirely on profit—meaning no donation would be required if a foreign government’s patronage occurred at properties that lose money or break even.