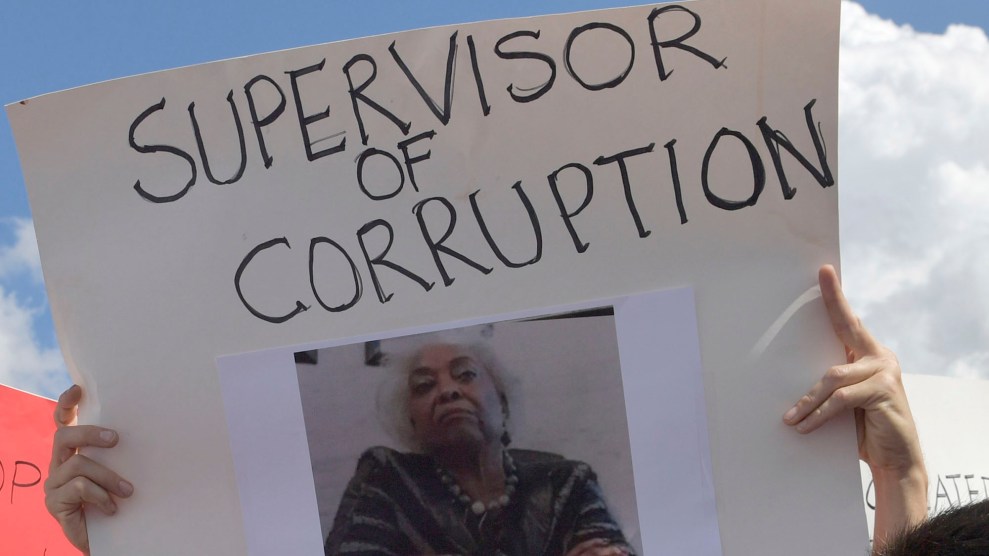 The protest started out peaceful. A crowd of conservative demonstrators gathered on Sunday morning outside the office of the Broward County supervisor of elections, where officials inside were preparing for a recount of the 2018 election results. Tents were erected to shield people from the hot sun, and patriotic country tunes made it feel more like a cookout than a protest. A day earlier, protests had featured a large contingent of Democratic protesters, but on Sunday, Republicans had the parking lot outside the supervisor’s office—a large facility in the back of a massive suburban strip mall—all to themselves.

But before long, the mood began to turn. The rooms inside the supervisor’s office were filled to capacity before noon, and office staffers wouldn’t let anyone in unless someone came out. That left a representative of the Broward Republicans and a representative of the Republican candidate for agriculture commissioner, whose race is being recounted, unable to attend the recount preparations. Several members of the media were also forced to wait outside. Slowly, rumors began to spread that only Democratic lawyers were being let in.

President Donald Trump and Gov. Rick Scott, the Republican candidate in the contested Senate race, have described the ongoing vote-counting effort as an attempt by Democratic officials and lawyers to steal the election, rather than a slow bureaucratic process. On Saturday evening, Rep. Matt Gaetz (R-Fla.) turned up in the parking lot with a megaphone and hyped the idea that fraud was taking place inside the supervisor’s office. The supervisor, Brenda Snipes, was an easy target. After 15 years in office, she has made several administrative blunders, including destroying 6,000 ballots in 2016 that a court had ordered her to preserve. At the protest, many signs called Snipes corrupt. Several included the hashtag #stopthesteal.

Around noon on Sunday, a Democratic lawyer arrived and helped ensure that a Republican attorney volunteering as a representative for the Republicans, Eric Matheny, was able to enter. But that didn’t stop the rumor that only Democrats were being allowed into the facility. Soon chants began to erupt: “Let our people in! Let our people in!”

Slowly, rumors began to spread that only Democratic lawyers were being let in.

Protesters began to gather near the perimeter where police officers were stationed to monitor who came in. Many were live-streaming the activities on their phones. One man began to film one of the officers and repeatedly told him to smile for the camera, threatening that he would be on the nightly news. Each time someone came in or left, an outcry ensued—even when the people were employees at the facility. Each new entry seemed to amplify the idea that Democrats were going in and Republicans were being left out.

The officials in the supervisor of elections’ office didn’t help matters by offering scant explanation about who could come in and who could not. That fueled more distrust. “It could have been mitigated” with a little explanation of the capacity issue, says Taryn Fensky, a spokeswoman for the Republican Party of Florida who was present to address the media. Instead, the protests turned bitter.

One of the two people kept outside, Broward County Republican Party official who gave her name as Michelle, was allowed inside the police perimeter but then not let inside. She came back out with a shocking allegation: The people inside had accused her of being a member of the Ku Klux Klan and turned her away. The woman refused to be interviewed by Mother Jones to explain the allegation, but it was relayed to a protester who told the KKK story through a megaphone. The crowd grew angrier.

Bruce Stanley, one of three independent candidates for governor who was on the ballot, attended the protest and said the fact that the two Republican officials were not allowed in “raises all sorts of red flags.” Protester Sherry Ashby called it “a violation of the Constitution.”

“I don’t care how full it is in there,” said Ashby, who has been protesting outside for days and plans to return on Monday. “They better damn well make room.”

After a few hours, the anger began to dissipate. Matheny, the Republican volunteer who did make it inside, came back out a while later and mingled with the protesters. “I agree both parties had an equal amount of attorneys,” he reported. He added that the process looked “transparent.”