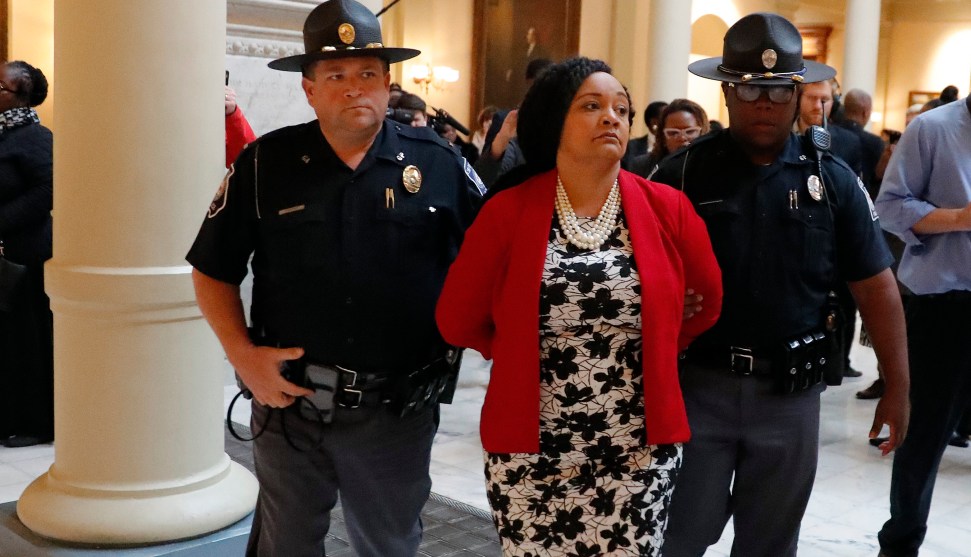 Sen. Nikema Williams (D-Atlanta) is arrested by capitol police during a protest over election ballot counts in the rotunda of the state capitol building Tuesday, Nov. 13, 2018, in Atlanta. John Bazemore/AP Photo

The morning of Tuesday, November 13, started out like many others for Nikema Williams. The Democratic state senator, who since 2017 has represented a diverse district covering a broad swath of Atlanta, showed up to work at the Georgia State Capitol for a special legislative session. A few hours later, the day became one she’ll never forget. “I keep replaying this in my mind over and over,” she told me. “Never did I imagine my day was going to end in jail.”

On Friday, I spoke to Williams about her experience. Here, in her own words, is the story of what happened, and how it changed her:

“My arm was pushed behind my back and I was placed in the same zip ties that I just asked the officers about upstairs.”

On the events leading to her arrest: We were set to convene at 10 a.m. When we adjourned, I was on the third floor talking with friends, waiting for the House to convene. Well, I saw a massive police presence start to gather in the Capitol on the third floor. And I at one point even walked over to the Capitol police and I asked what was going on and why they had all of these zip ties on their belt. And they said, ‘Well, there’s about to be a protest downstairs.’ I’m thinking, “This is random,” because I never see this much police presence, and there’s always things that happen at the Capitol.

I went back and I sat down and continued to talk with friends until I heard a glass break and a lot of commotion on the floor underneath me in the rotunda. I went downstairs, and I was immediately greeted by people who have been a part of the protest. They were like, “They just threw this young kid to the ground, and they’re arresting people.” And [the protesters are] doing nothing—just standing there talking about their concerns around their votes not being counted.

An officer didn’t like the way that one of the ladies was talking to him. And he said, ‘I could make an announcement right now to disperse and I could arrest everyone in here.’ Well shortly thereafter, that’s exactly what happened. A massive amount of officers started to encroach on the crowd and went into the middle of the circle. I followed them, because there’s a history of my people not trusting the police and not being treated fairly. At that moment, I noticed one of my constituents standing firmly in her place and not saying a word. And I went and I stood with her. I stood next to her. I wanted her to know that she was seen, that I heard her and I appreciated her being there to raise her voice.

On her arrest: Shortly thereafter, my arm was pushed behind my back and I was placed in the same zip ties that I just asked the officers about upstairs, and they put me in restraints. There were so many cameras and people—even media was present—and they said, “Senator, why are you being arrested?” [The police] knew I was a senator and it didn’t matter to them that I was there for a special session, that I was supposed to be in the building, that I wasn’t even a part of the protest. I came down to monitor and make sure that my constituents have the right to voice their concerns with what happened around the election.

I was taken out of the building in handcuffs, escorted by Capitol police, and put in a van. The vans had been out there waiting. They were waiting to arrest people all day. I was taken over to the Fulton County Jail where I was held for hours without ever [knowing] what I was being charged with or why I was being detained.

On almost being strip searched: I had on a dress, and I didn’t know that if you wear a dress that you are asked to remove your clothes. But that’s what happened to me. An officer at the Fulton County Jail actually told me to remove my dress because she needed to make sure that I was not hiding anything in my vaginal cavity. I refused, because at that point I told her I didn’t even know if I was being lawfully detained. And this felt incredibly invasive, and I was not stripping in front of everyone standing here. I went in and I saw all the other people that were arrested with me sitting there all waiting to know what they were actually charged with and why they were escorted out of their state Capitol. We finally learned that everyone there, including me, got one charge of disrupting the General Assembly. But apparently I was special and someone wanted to make a point with me because I got two charges: Disrupting the General Assembly as well as obstruction.

“I understand that I’m living my ancestors’ wildest dreams, which is why I must continue to fight.”

On how the experience changed her: I tell people all the time that everyone views life through their lived experience, and this is definitely a different experience for me. The way that the handcuffs or the restraints were placed on people—my wrist is still sore today from the tightness of the zip ties. It was unnerving to see the way people were treated. There was someone on the van with me who repeatedly asked use the bathroom. And at one point he was sitting on the bench next to me and he said he was going to pee on the seat. Most of the white people that were arrested could wiggle their way out of the restraints, but I couldn’t. And they helped him urinate in a cup on the seat of the van sitting next to me. That’s inhumane. That was humiliating for him and all of us that were on the van with him. And we have to do better the way we treat people in our criminal justice system, whether they’re detained legally or not. Everybody deserves to be treated humanely. We also need to do better in not detaining people who should never even be in the criminal justice system at all.

On how the experience will influence her priorities: Because of all of the irregularities surrounding the gubernatorial race, I’ve already been looking at a package of voting reforms. It’s 2018. I grew up in rural Alabama, and some of the things that are happening here are just an updated version of what my grandparents told me about happening in Alabama years ago. But I also want to look at how we are treating protesters when they come into the Capitol. There has been a systemic blocking of the people’s access to the Capitol. That is not how our government is supposed to work. It’s about making sure that everyone has access to our government, because it doesn’t belong to just the elected officials—or just the elected officials that are in the majority party. It belongs to all of us as citizens of Georgia.

I’m operating in a system that was not designed for me or people that look like me. But I’m not going away. I was just elected to a two-year term. And if they did anything, they gave me a bigger platform to elevate the issues in our voting system, in our criminal justice system, and make sure that I continue to uplift my constituents. I’m not going away.

I’m incredibly grateful to be able to serve in this capacity. And I understand that I’m living my ancestors’ wildest dreams, which is why I must continue to fight, because that’s why I was sent here.