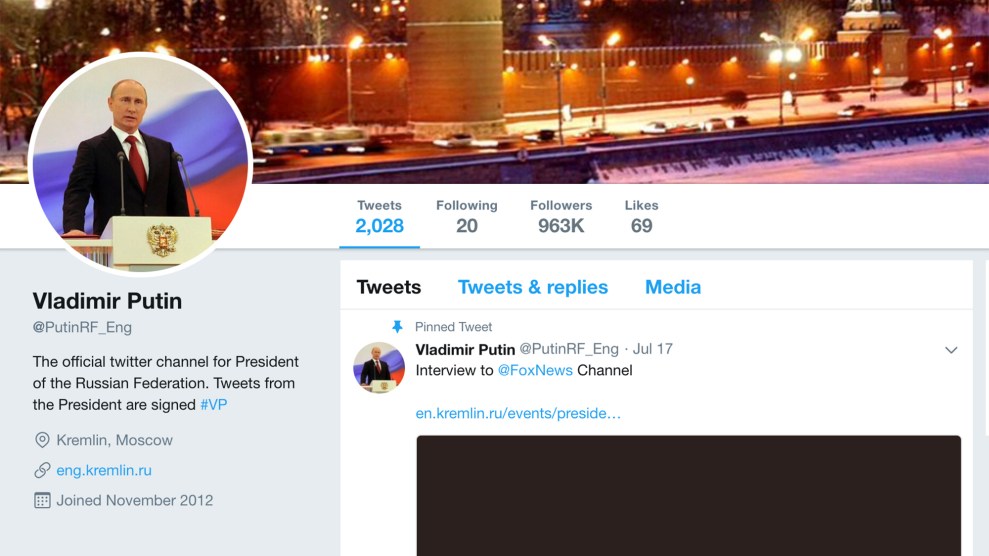 A fake Twitter account posing as Russian President Vladimir Putin fooled more than a dozen major news sites, which used the imposter’s tweets in their stories going as far back as 2013, Mother Jones has found.

Before Twitter revealed it to be fake on Wednesday, the account, which purported to be “the official Twitter channel for President of Russian Federation,” had amassed around one million followers, including Putin’s real account.

The company said that it had been tipped off to the fake by Russian officials but did not respond to a question about when that occurred. It is not clear who created the account or why. Many of the tweets posted by the Putin impersonator linked to official Russian government statements.

We suspended @putinRF_eng for impersonation based on a valid report we received from Russian officials. Our impersonation policy can be found here: https://t.co/PIBC4nGI8H

The account never gained a verified blue check mark confirming its veracity, but in the four-and-a-half years the account was active, journalists helped lend credence to the account by including its tweets in stories. A review by Mother Jones found at least 13 major outlets that had done so, including the Washington Post, The Atlantic, Wired, and Politico. In their stories, many of the outlets didn’t just embed tweets from the account but explicitly framed them as the voice of the Russian president.

“Putin himself—from @PutinRF_Eng—said [he and Trump] had ‘discussed the situation in Syria after the missile strikes by the United States and its allies,’” Wired wrote in May.

In June 2015, CBS News directed its readers to follow the account for updates on Putin’s meeting with Pope Francis.

The ruse had global reach: The fake Putin account had amassed 2.2 million followers before it was shut down. World leaders including former Italian Prime Minister Silvio Berlusconi and Greek Prime Minister Alexis Tsipras tweeted at the account, mistaking it for one actually run by the Russian government.*

At this morning’s meeting w/@PutinRF_Eng we created a new foundation for Greek-Russian relations. #Greece

Hoax accounts linked to Russian influence operations have also duped media organizations in the past. News sites including the Washington Post, BuzzFeed, Vox, and BBC News embedded tweets in their stories from accounts later revealed to be affiliated with the Internet Research Agency, a Russian troll group. The accounts, often posing as average Americans, tweeted about hot-button political issues such as Colin Kaepernick’s protests against racial injustice before NFL games. Media outlets have often used those tweets as examples of public reaction to major events in the news. In November 2017, Recode and the media intelligence firm Meltwater found roughly 2,800 instances of media outlets embedding Russian troll account tweets in their stories.

Some news outlets vowed to embed tweets with greater caution after the scope of the IRA operation became public, but the phony Putin account illustrates how difficult it can be to spot frauds.

Last month, Twitter released datasets involving fake accounts, including millions of tweets by known Russian accounts, in an effort to give researchers more information on how its platform was manipulated around the time of the 2016 presidential election.

Twitter and other social media platforms have made efforts to curb manipulation by Russian and other foreign governments by shutting down scores of inauthentic accounts. Yet the steady stream of new inauthentic accounts shows that Russia, Iran, and other countries are able to defy crackdowns on misinformation.

Correction: An earlier version of this article misstated Tsipras’ status as prime minister.