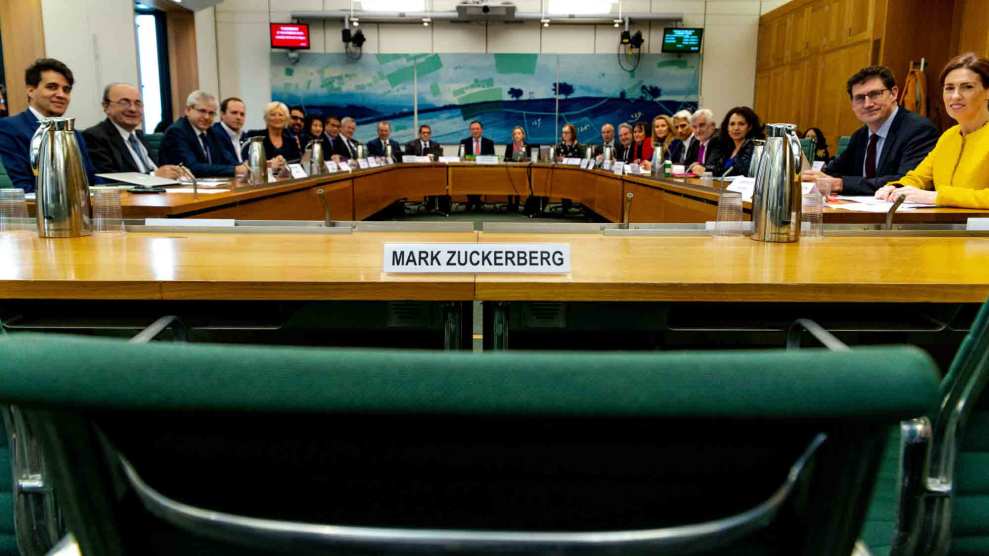 Immediately after the 2016 election, Facebook CEO Mark Zuckerberg dismissed as “crazy” the notion that fake news stories disseminated over his platform had influenced the outcome of the presidential race. Facing an outpouring of criticism about Facebook’s role in spreading disinformation, Zuckerberg and his company have since adopted a more contrite position, vowing to “do better.” But during a hearing focused on the social media platform in the United Kingdom on Tuesday, a top Facebook executive once again downplayed the company’s role in impacting the election and defended Zuckerberg’s controversial stance.

Appearing before a parliamentary hearing attended by lawmakers from nine countries, Richard Allan, Facebook’s vice president for policy solutions, suggested that Russian operatives or other nefarious actors seeking to sow political chaos had a minimal effect on the election because they had spent far less to promote their content than the Trump and Clinton campaigns and the outside groups supporting them. “I’m saying it could be more elegantly classified, but the point is, if you have domestic organizations and political parties spending this much and you have evidence of some inappropriate activity spending this much,” Allan said, gesturing to show large amounts of legitimate spending and small amounts of illicit spending, then “if you say to me, ‘Was this election won because of this massive activity here or because of this small amount of activity over here?’ I think it’s reasonable to say, ‘Let’s start by looking at if we think there’s a problem in campaign spending generally.’”

Yet Facebook itself has pointed out that the amount spent by advertisers doesn’t necessarily correspond with their reach and impact. An internal Facebook paper obtained by Bloomberg showed how the Trump campaign was able to get more distance for its dollars by using a strategy that was “more complex” than Hillary Clinton’s and ” better leveraged Facebook’s ability to optimize for outcomes.”

Jason Kint, the CEO of Digital Content Next, a trade group that represents media companies, sharply criticized Allan’s testimony in an email to Mother Jones: “I found it remarkable Facebook sent a regional lobbyist to testify in the place of Mark Zuckerberg…and he would double-down on Mark’s flippant comments.”

A paper published by Ohio State researchers in April found that false stories spread across social media likely had a significant impact on the 2016 election. “Former Obama voters who believed one or more of these fake news stories were 3.9 times more likely to defect from the Democratic ticket in 2016 than those who did not believe any of the false claims,” the researchers wrote.

“Without a time machine, no one can go back and say Russian troll ads definitely affected the election, but to argue it has no impact—that’s wrong,” says Peter Singer, a senior fellow at the think tank New America and the author of Like War, a new book on how social media has been weaponized in politics. “The data showed it had an impact. In fact, that’s the business model.”