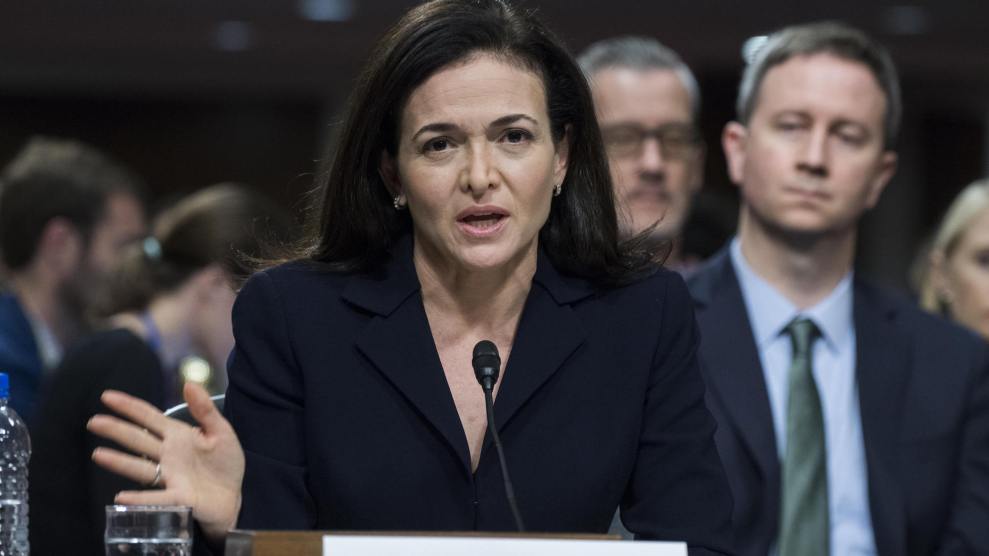 On Thursday, Facebook COO Sheryl Sandberg will meet with Color of Change, the group Definers targeted while employed by Facebook.Tom Williams/CQ Roll Call/Newscom via ZUMA

The day after a New York Times story revealed that Facebook had employed a conservative opposition research agency named Definers to discredit critics, including the organization Color of Change, Facebook organized a meeting in its Washington, DC office between more than a dozen civil rights groups and Facebook’s head of US Public Policy Kevin Martin. At the closed-door meeting, the civil rights advocates—which included representatives from Color of Change and the Leadership Conference on Civil and Human Rights—expressed their disappointment in discovering that after spending months—and in many cases years —working with Facebook to weed out discriminatory user behavior on the website, the company’s leadership had been privately spreading attacks against those groups.

For years, civil rights groups have challenged Facebook on everything from allowing discriminatory advertising to how it moderates hate speech. In May, after increased scrutiny resulting from the Cambridge Analytica scandal, Facebook announced that it would launch a civil rights audit, which would be conducted by a Washington-based law firm and guided by civil rights leader Laura Murphy, the former Director of the American Civil Liberties Union’s Washington legislative office. But six months later, the groups that pushed for that internal investigation are frustrated by the minimal progress made by Facebook, and the lack of public findings from that audit.

“We need assurances that real-time changes are being made,” says Vanita Gupta, president and CEO of the Leadership Conference on Civil and Human Rights. “Some have been. But there hasn’t been a decision about how public they will be about the findings of the audit.”

For activists, the company’s slow-moving apologies about the attack on Color of Change aren’t enough to rebuild trust. “I don’t want the company to perfect the apology tour,” says Francella Ochillo, vice president of policy and general counsel at National Hispanic Media Coalition. “I think we want the company to say we are listening, we get it, we’re going to do better, here’s where we’re starting.”

Facebook’s civil rights audit followed a letter from 19 groups last year requesting a full investigation into the “civil rights impact of [Facebook’s] policies and programs.” But for many of the groups behind that push, Facebook got off to a shaky start. The same day that Facebook committed to a civil rights audit in May, it announced that it would bring in then-former Sen. Jon Kyl (R-Ariz.) and his law firm, to audit bias against conservatives on the platform. (Kyl was appointed to fill John McCain’s Senate seat in September, and stepped down from the audit at that time.)

The simultaneous announcement was an immediate red flag to civil rights groups, including the Leadership Conference, a civil rights coalition that represents more than 200 civil rights organizations, including the NAACP and Muslim Advocates. “It is very perilous for the company to be reifying that somehow civil rights is a partisan endeavor of the liberals,” Gupta says. “[Conservative bias] is an entirely separate issue from the need for Facebook to be concerned about civil rights laws.”

And while its investigation into conservative bias has gotten high profile attention from lawmakers—at least two Congressional hearings have been dedicated to the issue—it’s unclear to many of those involved what progress has resulted from the civil rights audit. So far, Facebook has not released any public reports. The company has not yet determined if it will do so, company spokesman Andy Stone tells Mother Jones.

According to Laura Murphy, the civil rights advocate tasked with guiding the audit, she has interviewed 93 groups and individuals so far. In July, Facebook asked Murphy to summarize the issues that civil rights groups had flagged about voter suppression. According to Murphy, what followed were “dozens of meetings” with the company’s product, policy, and community operations team. The result of some of these changes, which included allowing users to report to Facebook misleading information about voting, were publicized in October.

“I think it’s off to a very respectable start,” Murphy tells Mother Jones. “Not everything that the groups asked for were included, but I think this is going to be an ongoing process.”

The Leadership Conference was also involved in efforts to train what Facebook dubbed its election “war room” to detect voter suppression, but Gupta was skeptical about the process. “There was a kind of automatic reaction to wanting to also have that war room trained on fraud, which is the very justification for a lot of other suppression efforts,” Gupta says.

“It is very perilous for the company to be reifying that somehow civil rights is a partisan endeavor of the liberals.”

The same is true for its civil rights effort. In the company’s community standards enforcement report released in November, Facebook reported that the amount of hate speech proactively identified and removed had doubled from fall 2017 to summer 2018, from 1.6 million to 2.9 million posts. Facebook also announced that it would introduce a new “independent body, whose decisions would be transparent and binding” to reform how the company handles the content moderation. But it’s unclear if that review will include any civil rights organizations. “My initial concern is what groups or experts have advised Mark Zuckerberg and Facebook on this Supreme Court of moderation,” says Carmen Scurato, senior policy counsel at Free Press, a media and internet advocacy group that works on issues including Net Neutrality.

In October, a coalition of more than 40 other groups, including the National Hispanic Media Coalition and Free Press, outlined a number of recommendations for how online companies can combat hate speech. Facebook’s recent changes appear to align with some of the campaign’s goals, including a right to appeal, an outside advisory council, and increased transparency on its moderation process.

While groups praised Facebook’s decision to bring in Laura Murphy, a known civil rights activist to oversee the audit, many expressed frustration in interviews with Mother Jones that Facebook has not committed to releasing a report about the audit. Murphy was also unclear if a public report would be released, saying it was ultimately Facebook’s decision as to “what it’s going to release and when.”

“I feel like the company is deeply engaged in this process. They haven’t talked about it publicly but I’m on the phone with them every single week. Several times a day depending on the issue,” says Murphy. “I think they’re taking the process seriously. I think they know they need to overcome a trust deficit.”

Ultimately, outgoing Head of Communications and Policy Elliot Schrage took the fall for the work with Definers. But the aftermath is hardly over. Facebook confirmed to the Mother Jones that Sheryl Sandberg, Facebook’s chief operating officer, will meet with Color of Change on Thursday.  Color of Change is also drafting a letter with a list of audit demands, which it hopes to deliver to Facebook with support from members of Congress in advance of the talk.

Despite their many concerns, the groups Mother Jones spoke with said they remained committed to working with Facebook on civil rights issues.

“What’s clear is that if Facebook had been maybe putting as much energy into trying to solve the problems [as] they were trying to undermine us, they would be a little bit further,” says Robinson. “We remain committed, this is not a question of walking away from the table. But I’m really trying to double down on a commitment to making Facebook live up to its stated values.”