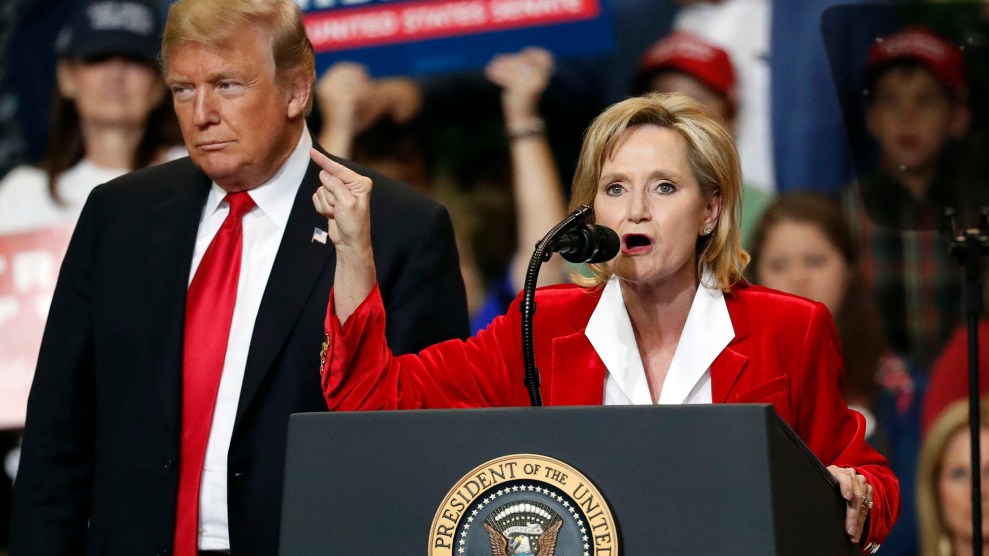 Despite the controversy that has roiled her campaign for the past three weeks, Cindy Hyde-Smith has won the race for Mississippi’s Senate seat, overtaking Democrat Mike Espy, according to NBC News and the New York Times.

The victory for Hyde-Smith, who has been serving in the Senate since she was appointed to replace Sen. Thad Cochran in April, was narrower than it might have been under different circumstances. Though her campaign stuck to a classic Mississippi Republican playbook, the candidate was plagued by gaffes, to put it mildly, which led to an underwhelming margin during the special election Tuesday.

She was the first woman to represent Mississippi in the Senate, and she will now be the first woman elected to the chamber from the state. Her opponent, meanwhile, would have been the first black senator elected from Mississippi. Espy and Hyde-Smith were the top two vote-getters on Election Day, but neither reached a majority in a three-way race, sending them to the runoff and eliminating Tea Party firebrand Chris McDaniel.

Up until the general election, Hyde-Smith was considered a fairly predictable Mississippi candidate, especially in contrast to McDaniel, and her platform centered around her allegiance to President Donald Trump, like many hardline Republicans running for office this year. According to FiveThirtyEight, she has the track record to prove her loyalty; she voted in line with Trump 100 percent of the time as a sitting senator. The president rewarded her with an endorsement in the general election (and of course, in the runoff), as well as with two rallies in the state just a day before the runoff election.

But Trump wasn’t there just to repay her support—he was also there to push her embattled candidacy across the finish line in a state where he remains exceedingly popular. Hyde-Smith first really caught the country’s attention—and many people’s anger—at an early November campaign stop in Tupelo, Miss., where she was recorded saying if a supporter were to invite her to a public hanging, she would be in the front row. The comment struck a very specific chord in Mississippi, where 581 people were lynched from 1882 to 1968, according to the NAACP—more individuals than in any other state. As outrage mounted, Hyde-Smith refused to apologize, putting out a statement the following day that merely said: “In a comment on Nov. 2, I referred to accepting an invitation to a speaking engagement. In referencing the one who invited me, I used an exaggerated expression of regard, and any attempt to turn this into a negative connotation is ridiculous.” She then refused to answer questions about the comment and repeatedly referred only to her statement for more than a week, rather than offering any kind of regret.

Meanwhile, just days after the first flub, Hyde-Smith was recorded saying it might be “a great idea” to make it “just a little more difficult” for “liberal folks in those other schools” to vote, while at a campaign stop in Starkville, Miss., where Mississippi State University is based. She insisted it was a joke.

The missteps fueled hopes of both national and local Democrats, and fed fears among Republicans that they may be looking at a repeat of last year’s Alabama special election that sent Democrat Doug Jones to the Senate. Espy was a promising candidate in his own right, with plenty of political experience, having served in Congress and as secretary of agriculture under President Bill Clinton. However, he was plagued by a few scandals from his past that the Hyde-Smith camp took advantage of: During his time as agriculture secretary, he was investigated on corruption charges but was ultimately acquitted, and as a lobbyist, he provided representation for the Ivory Coast Cocoa Commission, a relationship which Espy says he terminated after he realized the full extent of the human rights abuses of then-President Laurent Gbagbo.

The two candidates met for their only debate on November 12, and Hyde-Smith finally addressed the “public hanging” comment. But she offered what at best can be considered a lukewarm apology—”For anyone that was offended by my comments, I certainly apologize”—before accusing Espy of using her words as a “political weapon.” Espy called her remarks “another black eye” for the state, saying that she was contributing to damaging stereotypes about Southerners.

“No one twisted your comments because your comments were live,” Espy retorted during the debate. “I don’t know what’s in your heart, but we all know what came out of your mouth.”

Following the debate, news reports revealed more controversies from Hyde-Smith’s past, including a 2014 Facebook post in which she is wearing a Confederate soldier’s hat and holding a rifle at the Jefferson Davis Home and Presidential library, captioned “Mississippi history at its best!” Hyde-Smith also proposed a resolution to rename a stretch of Mississippi highway the “Jefferson Davis Memorial Highway” as a state senator; it died in committee. And in 2016, as Mississippi agriculture commissioner, she bestowed a prize for best community float in a parade to Dixie Alliance, a Confederacy heritage group.

Then, just the weekend before the runoff, the Jackson Free Press reported that Hyde-Smith’s high school years were spent attending Lawrence County Academy, an all-white “segregation academy” set up for white parents who wanted to avoid sending their children to a school with black children. In a 1975 yearbook photo, a teenage Hyde-Smith sports a cheerleading uniform next to a Confederate colonel mascot. The newspaper also reported that when it came time for Hyde-Smith to choose where to send her daughter to school, they went with Brookhaven Academy, a nearly all-white school—in the 2015-2016 school year, the only students of color were five Asian children and one black child.

Espy in response shared with voters how he and his twin sister integrated a previously all-white school in Yazoo City in 1969, recalling how he was the target of racial slurs many times when he was a student. “I guess you could juxtapose my experience with her experience,” Espy said between campaign appearances in Jackson. “If the story is correct, she consciously made a decision to separate, and my parents consciously made a decision to be inclusive.”

“So, that’s a Mississippi I want to be a part of, one of diversity, one of inclusion, one of different experiences,” he added. “I decided to use that very difficult time to learn from and try to reach out to people of all races. So, if you compare me and that experience to Cindy Hyde and her experience, I’d rather have my experience.”

Despite all of this, Hyde-Smith pulled out the victory Tuesday, a fact that is ultimately unsurprising in the historically blood-red state. Still, Espy’s campaign and the national interest and enthusiasm it spawned—not to mention the smaller than expected margin Tuesday—could signify unrest in Mississippi as 2020 grows closer.