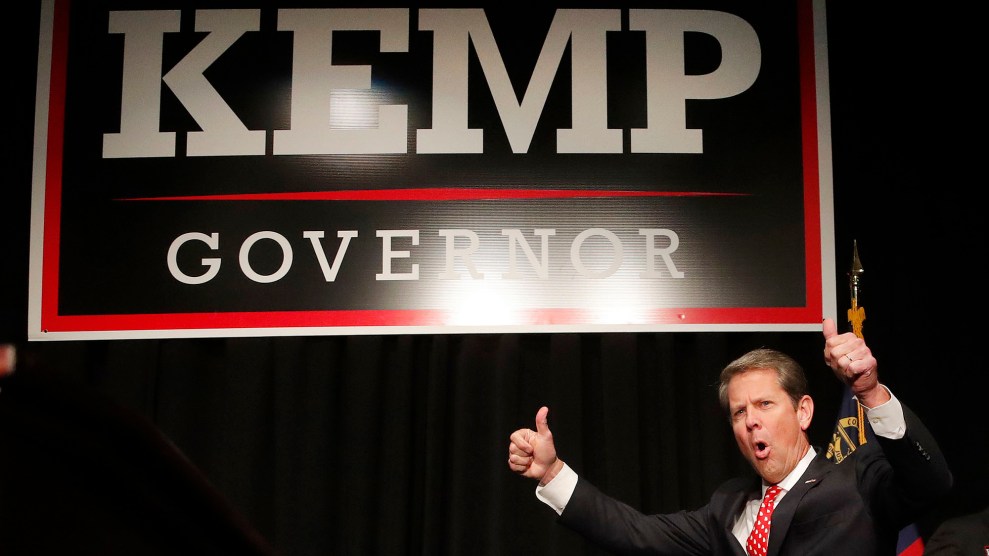 India Owens, a 22-year-old African American woman, voted in the 2016 presidential election at Union Grove Baptist Church in Auburn, Georgia, an exurb of Atlanta. Two years later, she hadn’t moved or changed her address, but when she returned to her polling place on the morning of November 6, 2018, she was told by poll workers that she was not registered to vote. She was not offered a provisional ballot and left without voting. She returned later that day and demanded a provisional ballot, but she does not know if it was counted.

Owens’ story was not an isolated incident in Georgia this election. There were a multitude of voting problems in the gubernatorial race between Republican Brian Kemp and Democrat Stacey Abrams. Eligible voters didn’t show up on the registration rolls or were purged by the state. Thousands of Georgians had their registrations put on hold and weren’t sure if they’d be able to vote. Some voters were wrongly flagged as non-citizens; others had their ballots rejected because poll workers told them they had the wrong ID. Hundreds of polling places were shuttered before the election, and other precincts had four-hour lines. Absentee ballots were rejected because of signature mismatches or other minor errors. One Abrams adviser described it as “death by a thousand paper cuts.”

On Friday afternoon, Abrams acknowledged that Kemp—the secretary of state who implemented many of these restrictions and was in charge of ensuring a fair voting process—would be certified as the winner of the election. He leads by 55,000 votes, out of nearly 4 million cast. Abrams came within 18,000 votes of forcing a runoff. The election was marred by allegations of widespread voter suppression, and the Abrams campaign says that suppression may have prevented enough votes to keep the race from going to a runoff. Other top Democrats echoed these concerns. “If she had a fair election, she already would have won,” Hillary Clinton said this week.

At a press conference on Friday, Abrams said that “under the watch of the now-former secretary of state, democracy failed Georgia.” She noted that although there was “no further viable remedy” to challenge the election results, she would soon be filing “a major federal lawsuit” challenging Kemp’s “gross mismanagement” of the election. “Voting is not a right for some, it is a right for all,” she said.

We don’t know yet—and might never know—how many people were disenfranchised or dissuaded from voting in the state. But it’s clear that Kemp did everything in his power to put in place restrictive voting policies that would help his candidacy and hurt his opponent, all while overseeing his own election.

Georgia was the epicenter of Republican voter suppression tactics in 2018. As secretary of state, Kemp instituted a series of suppressive policies that Abrams said allowed him to “tilt the playing field in his favor.” These efforts uniquely hurt voters of color, who formed the backbone of the Abrams base, while having a much smaller effect on white voters, who strongly supported Kemp.

Kemp began by shrinking the electorate. Under his leadership, Georgia purged 1.5 million voters from 2012 to 2016, twice as many as in the previous four years, and removed an additional 735,000 voters from the rolls over the past two years. On one evening in July 2017, Georgia purged 500,000 voters, in an act the Atlanta Journal Constitution said “may represent the largest mass disenfranchisement in US history.” Some voters were removed legitimately, because they had died or moved, while others were purged for more controversial reasons, such as not having voted in the previous six years. More than 130,000 of those purged had registered to vote in 2008, when Barack Obama first ran for president, and nearly half were voters of color.

The Stacey Abrams campaign says that suppression may have prevented enough votes to keep the race from going to a runoff.

Registration problems were widespread in Georgia. Weeks before the election, the Associated Press reported that Kemp’s office had put 53,000 people on a pending registration list because information on their voter registration forms did not match state databases. Seventy percent were African American and 80 percent voters of color, in a state that’s 60 percent white. Though these people remained eligible to vote, the list led to widespread confusion, and there were reports on Election Day of hundreds of people on the pending registration list being forced to cast provisional ballots or leaving the polls without voting, even though they should have been given regular ballots. Three thousand naturalized US citizens—who were disproportionately Latino and Asian American—were put on the list because their citizenship status didn’t automatically update in state databases when they become citizens.

Days before the election, Kemp falsely accused Georgia Democrats of “cyber-crimes” for uncovering vulnerabilities in the secretary of state’s website. Georgia was one of only five states that used electronic voting machines with no paper backups, and Kemp repeatedly resisted efforts to secure the state’s voting system, accusing the federal government of trying to “subvert the Constitution” when it offered to help safeguard against Russian hacking in 2016.

“The number of people who cast provisional ballots,” says Sara Henderson, executive director of Common Cause Georgia, “doesn’t even come close to the number of people who were disenfranchised.” The Abrams campaign heard from 25,000 people who had problems voting. Henderson helped oversee election protection efforts for nonpartisan voting rights groups and said “our phones in the command center were ringing off the hook.”

Long lines at the polls were another big problem. The average wait time on Election Day was three hours in metro Atlanta. One largely African American precinct outside Atlanta saw four-and-a-half-hour lines. There were no similar reports of long lines in Republican-leaning areas. It’s impossible to know how many people left without voting because of the lines. Georgia had the second-longest voting wait times of any state in 2016, and the problem only got worse in 2018.

Long lines were compounded by the fact that Georgia had closed 214 polling places since 2012. “One-third of Georgia’s counties,” reported the Atlanta Journal Constitution, “have fewer precincts today than they did in 2012.” More than half of the counties with closed voting locations had African American populations of 25 percent or higher. Though the decisions were made by individual counties, Kemp’s office advised them on how to close polling locations.

A series of court decisions before the election rebuked Kemp’s actions, finding that he violated laws such as the Voting Rights Act, National Voter Registration Act, and Help America Vote Act. (More voting rights lawsuits have been filed against Georgia than any state except for Texas since 2011.) In five court decisions, judges instructed Georgia to count absentee ballots rejected because of mismatched signatures or missing birth dates; ordered counties to give voters more time to have their provisional ballots counted; and said that naturalized citizens should be given the opportunity to vote if they brought proof of citizenship to the polls. But it’s unclear how many of the orders filtered down to poll workers or everyday voters, who remained confused by the dizzying number of voting restrictions and last-minute court rulings.

When he was running for reelection as secretary of state in 2014, Kemp warned: “Democrats are working hard registering all these minority voters that are out there and others that are sitting on the sidelines. If they can do that, they can win these elections in November.” Kemp did everything in his power to make sure that didn’t happen in 2018—and that’s a big reason why he, and not Abrams, will be Georgia’s next governor.