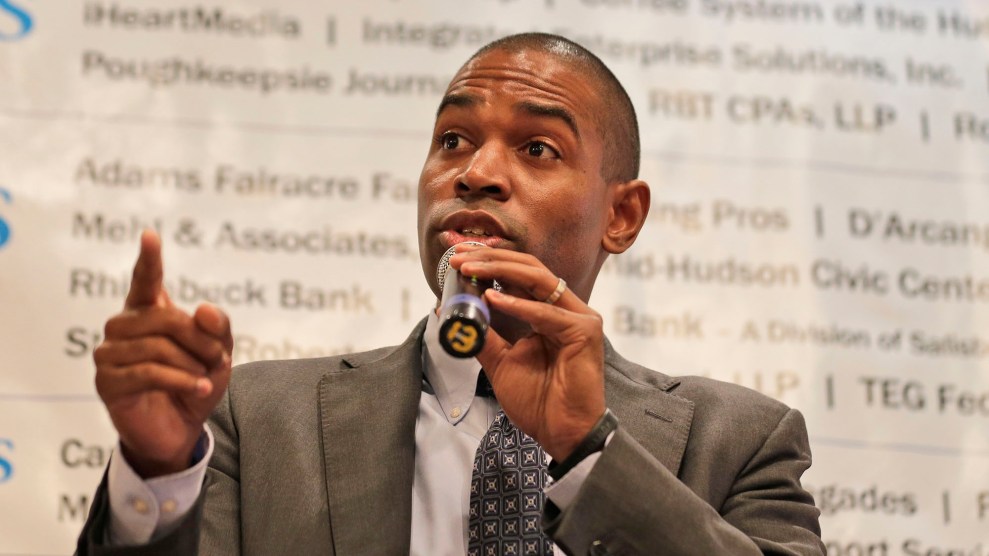 As a Rhodes Scholar, Antonio Delgado studied philosophy and political theory. But when he ran for Congress in upstate New York this year, Republicans chose to highlight another part of Delgado’s resume: his post-Oxford, post-Harvard Law years as a rapper. The ads portrayed Delgado, who worked as a corporate lawyer at an elite firm before running for Congress, as a “big-city rapper” unsuited to represent an overwhelmingly white district.

On Tuesday, Delgado defeated Rep. John Faso and will become the first nonwhite representative in the district’s history. The racist ads Delgado overcame were not subtle, even by the standards of the Trump era. One ad from the National Republican Congressional Committee opened with a white man saying, “Antonio Delgado would be fine in Los Angeles, maybe New York City,” and then adding, “Nobody talks like that around here.” It ended with a woman claiming, “His voice definitely can’t be my voice.” Another NRCC ad took Delgado’s rapping out of context and juxtaposed images of him in a suit with a shadowy album-cover photo of him in a hoodie.

Delgado was one of many Democrats of color cast as an outsider in swing districts held by white incumbents. Indicted Rep. Duncan Hunter (R-Calif.) falsely suggested that his Palestinian-Mexican-American opponent, Ammar Campa-Najjar, was a “radical Muslim” with plans to infiltrate Congress. (Campa-Najjar is Christian.) Republicans tried to boost New Jersey Rep. Tom MacArthur against challenger Andy Kim, who is Korean American, by sending out a mailer that used a stereotypically Asian font to claim there was something “Real Fishy about Andy Kim.” In Ohio, the Congressional Leadership Fund, a super-PAC affiliated with outgoing House Speaker Paul Ryan, falsely implied that Aftab Pureval, the son of Indian and Tibetan immigrants, helped Libya pay less money to the relatives of Americans killed by state-sanctioned terrorism.

In Delgado’s race, Republicans appeared determined to motivate the white voters who delivered New York’s 19th Congressional District to Donald Trump. About 83 percent of voters in the Hudson Valley district, which covers an area nearly the size of New Jersey, are white. Barack Obama carried the district by eight points in 2008 and six points and 2012 before Trump won by a six-point margin.

Contrary to the NRCC’s big-city insinuations, Delgado grew up north of the district in Schenectady, New York. After the 2016 election, he moved from North Jersey to Rhinebeck, near his wife’s hometown of Woodstock. (Faso grew up outside the district on Long Island and went to high school in Queens.) In college, Delgado became the first Colgate University student since 1971 to win a Rhodes Scholarship and headed off to Oxford with plans to teach philosophy to college students. But he focused on hip-hop after graduating from Harvard Law School, which he felt had the potential to serve as an “informal educational system,” like churches during the civil rights era.

The Hip Hop Cosign, a now-defunct blog, wrote in 2007 that Delgado’s debut (and only) album as the rapper AD the Voice was “rooted in black intellectual excellence and the human struggle for peace and truth.” Delgado rapped in one song, “My patriotism a given…Don’t tell me I don’t love my country because I stay driven by a desire for us to be better.”

Republicans portrayed Delgado’s brief rap career differently. One ad from the Congressional Leadership Fund paired Delgado rapping “God bless Iraq” with an image of the Twin Towers burning. Delgado actually said, “We must fight with love and goodness in our hearts and peace in our minds if democracy, equality, and freedom are truly to prevail. God bless America, God bless Iraq, God bless us all.” (The ads did not mention that Delgado went on to become a lawyer in the New York office of Akin Gump, a lobbying powerhouse based in Washington, DC.)

As my colleague Tim Murphy wrote in September,  Republicans’ message was not lost on the voter who made this sign:

Spotted on 23B in Cairo… this reads just like a @realDonaldTrump tweet. Meet @DelgadoforNY19 and you will see that this sign is catagorically false #NY19 #FireFaso #BlueWave pic.twitter.com/HgWKRqQTD7

Faso called Delgado’s lyrics “offensive” but said he had no control over ads from outside groups. The New York Times editorial board wrote that Faso was “race-baiting his opponent” and counting on his constituents “to be bigots.” Faso responded that it was “nothing less than an outrageous smear.”

Delgado said the attacks were an attempt to “otherize” him and avoid talking about the issues. His own ads avoided the controversy by focusing on providing affordable universal health care and cutting taxes for the middle class.

But Delgado did not apologize for his lyrics, either. “I’m very committed to the themes that I was concerned about then, chief among them people on the margins,” he said last month. “So for me to apologize, I would in essence be apologizing for what I am doing today.”