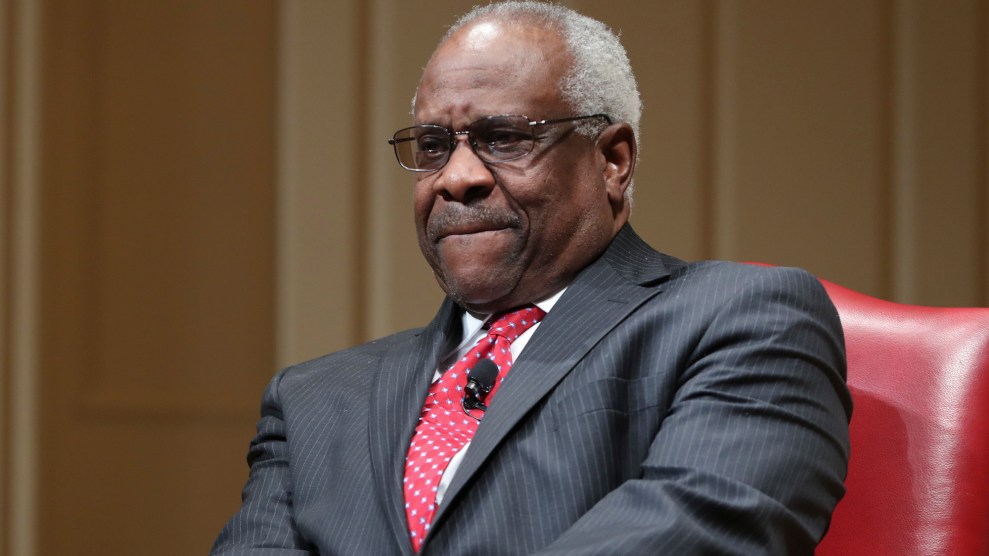 If Senate Majority Leader Mitch McConnell (R-Ky.) succeeds with his plan to confirm Brett Kavanaugh to the Supreme Court this week, Kavanaugh still won’t be a Supreme Court justice. Before he can vote on a case or write an opinion, he will need to take two oaths of office. And if history is any guide, the White House may try to orchestrate those oaths as quickly as possible, before any more women or witnesses can make additional allegations about Kavanaugh.

That’s what happened with Clarence Thomas, whose freighted Supreme Court confirmation process is so similar to Kavanaugh’s. Thomas’ 1991 confirmation hearing was reopened after Oklahoma law professor Anita Hill alleged that Thomas had sexually harassed her when she worked for him at the Education Department and the Equal Employment Opportunity Commission, the federal agency dedicated to fighting sex discrimination. After the Senate voted to confirm Thomas, the administration of President George H.W. Bush rushed Thomas’ swearing-in out of fear that more serious allegations would surface against Thomas, according to several accounts. It’s the same calculation apparently driving McConnell’s insistence that the Senate vote for Kavanaugh by the end of the week, even though the FBI will barely have completed its investigation into the sexual assault allegations against Kavanaugh.

The day after Kavanaugh’s second trip to Capitol Hill to testify before the Senate Judiciary Committee, Washington Post White House reporter Josh Dawsey told CNN’s John King that he’d heard from people inside the White House that if the vote was postponed for much longer, “They’re afraid new women will come forward with new accusations…I think the concern among many folks in the White House is that the longer this goes, the worse it gets.”

That’s how Republicans felt in 1991. After three days of contentious hearings that ended at 2 a.m. on October 14, including the testimony of Hill and other witnesses, the Senate voted two days later to confirm Thomas, 52 to 48. Chief Justice William Rehnquist was scheduled to administer the final judicial oath to Thomas two weeks later, on November 1. But the White House was nervous. Rumors were circulating of more damaging information to the nominee.

The Bush administration rushed Thomas’ swearing-in out of fear that more serious allegations would surface against him.

Senators on the committee ultimately refused to allow any of this testimony or subpoena the video store records, on the grounds that it would violate Thomas’s privacy. Republicans argued that an inquiry into Thomas’ youthful behavior had no relevance to his Supreme Court confirmation. But the hearing didn’t put an end to the speculation, and reporters were still sniffing around.

With the official judicial oath ceremony two weeks away—a lifetime in the news cycle—the Bush administration staged what was essentially a phony swearing-in ceremony at the White House on October 18 to give the impression that Thomas was a new justice. There was a gala on the South Lawn, to which Thomas invited hundreds of people. Friends came from his hometown of Pin Point, Georgia. Sylvester Stallone made an appearance. Justice Byron White administered the constitutional oath to Thomas, but only the judicial oath, usually administered by the chief justice, would legally make Thomas a Supreme Court justice for life.

The gala was considered to be in poor taste. During the whole confirmation fiasco, Rehnquist’s wife of 38 years, Nan, had been battling ovarian cancer. She died the day before the White House gala. The court reportedly asked the White House to delay the gala and the administration of Thomas’s constitutional oath, but it proceeded anyway.

Rehnquist agreed, and on October 23, the day after his wife’s funeral, he administered the judicial oath to Thomas in a private ceremony in the Supreme Court conference room. The hastily arranged event was the first private Supreme Court swearing-in in 50 years, and there were only a few witnesses. According to Supreme Discomfort: The Divided Soul of Clarence Thomas by Kevin Merida and Michael Fletcher, none of Thomas’ future colleagues were invited. The other justices learned about his official entry into their hallowed chambers in a terse memo Rehnquist sent out later that day noting that he’d administered the oath to Thomas. Rehnquist said the public investiture ceremony would still take place on November 1, as planned.

It’s not hard to see parallels between Thomas’ story and that of Kavanaugh, whose confirmation has been rushed from the beginning in an attempt to help Republicans in the midterm elections. If Kavanaugh manages to get at least 51 votes in the Senate this week, don’t be surprised to see the White House beg Chief Justice John Roberts to swear him soon after the confirmation vote to prevent any more bad press before he ascends to the bench for the next several decades. (Justice Samuel Alito was sworn in a few hours after his confirmation vote so that he could attend President George W. Bush’s State of the Union address.) The Trump White House won’t be taking any chances.