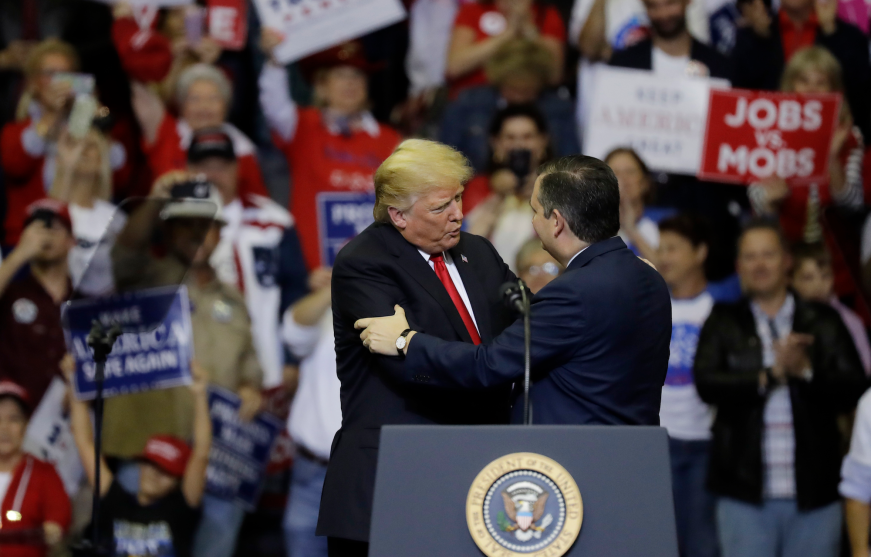 In making the case for a man he once disparaged as “worse than Hillary,” President Donald Trump on Monday painted a vote for Sen. Ted Cruz as a vote for his administration. He touted the Texas senator’s voting record as being crucial to some of his key successes, including the Republican tax bill and the Supreme Court nomination of Brett Kavanaugh.

“Nobody has helped me more, with your tax cuts, with your regulation, with all of the things that we’re doing,” Trump said referring to Cruz.

The president notably played down their once contentious relationship during the 2016 Republican presidential primary—which included Trump insulting Cruz’s wife and suggesting Cruz’s father was part of a conspiracy to assassinate JFK—telling supporters that he now considered the senator someone who has become a “really good friend.” (Don Jr. already explained that all he needed to make nice with Cruz was a few drinks in the Trump Hotel Lobby.)

Trump’s appearance in Houston, which came on the first day of early voting in the state, was meant to boost Cruz in his surprisingly tough re-election bid against his Democratic challenger, Rep. Beto O’Rourke. The rally on Monday featured some of the president’s most frequent talking points as of late, including the baseless claim that Democrats are funding so-called “caravans” of migrants to enter the country.

“Do you know how the caravan started, does everybody know what this means?” Trump said while making a hand motion that depicted cash being dispensed. “I think the Democrats had something to do with it, and now they’re saying ‘I think we’ve made a big mistake’ because people are seeing how bad it is, how pathetic it is, how bad our laws are.”

Many of his claims about the composition and intention of the migrants traveling to the US have been repeatedly disproved.

Trump on Monday also continued to falsely claim that Republicans hoped to ensure health care coverage for those with preexisting conditions—a blatant falsehood that ignores the president’s various attempts to end rules protecting coverage for people with preexisting conditions. The remarks also come as dozens of Republicans are attempting to rewrite their own records of voting to kill the Affordable Care Act ahead of the midterm elections.

The president’s remarks, which lasted roughly 90 minutes, largely avoided direct talk of Cruz. He did, however, take a cue from the Texas senator by repeatedly mispronouncing O’Rourke’s name.