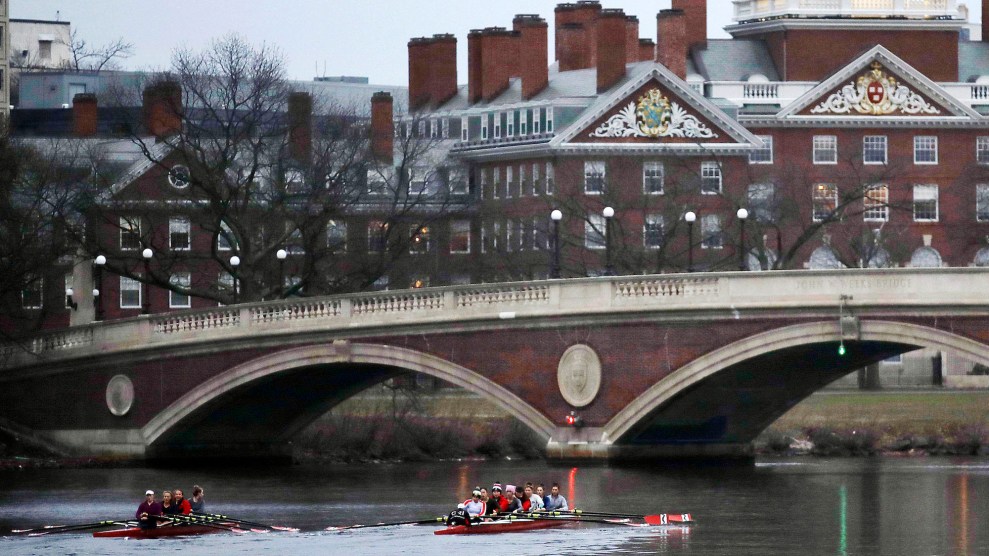 Rowers paddle along the Charles River past the Harvard College campus in Cambridge, Massachusetts.Charles Krupa/AP

When President Donald Trump nominated Michael Park to a seat on the 2nd Circuit Court of Appeals earlier this month, the announcement was low-key. It noted his work as a part-time law professor and stated simply, “He represents clients in litigation in a wide array of subject areas, including securities, criminal, commercial, administrative, and constitutional law.”

The announcement was deceptive: Park is hardly a generic New York securities lawyer. He is currently involved in one of the most high-profile and controversial lawsuits ever designed to end affirmative action in college admissions. The lawsuit, against Harvard University, alleges that the school discriminates against Asian American applicants. The trial in the case got underway last week. Civil rights activists say that if successful, the suit could result in a steep plunge in the number of black and Latino students admitted to the exclusive university. And if the case goes to the Supreme Court, as its backers seem to hope it will, it could ultimately end the consideration of race in admissions to all universities and colleges and shut out large numbers of minorities from top schools.

Park, who is Asian American, has been involved in the four-year-old case almost from the beginning, since becoming a partner in 2015 at Consovoy McCarthy, a boutique DC law firm founded by a former clerk to Supreme Court Justice Clarence Thomas. (When Park joined, it became Consovoy McCarthy Park.) The firm has become the go-to legal shop for conservative ideologues looking to fight everything from voting rights to affirmative action to abortion, particularly at the Supreme Court. It is currently representing President Donald Trump in a lawsuit over allegations that Trump is unconstitutionally taking gifts from foreign countries through his ownership of the Trump International Hotel in Washington and other properties.

Park has been in the middle of many of the firm’s ideological fights. A former clerk for Justice Samuel Alito, both at the Supreme Court and when Alito served on the 3rd Circuit Court of Appeals, Park is a member of the conservative Federalist Society, which has been intimately involved in the Trump administration’s judicial nominations. Park worked in the Justice Department’s Office of Legal Counsel when that office was embroiled in controversy over the George W. Bush administration’s use of torture in the “war on terror.” He later spent six years at a New York law firm doing white-collar defense and securities litigation before joining the upstart Consovoy firm as a partner in 2015.

Park quickly got to work on some of Consovoy’s most ideological cases, starting with the Harvard case, which was filed in late 2014, just two months after the firm opened. In 2016, the state of Kansas attempted to defund Planned Parenthood by banning it from participating in the state Medicaid program on the bogus grounds that it was illegally selling fetal tissue. The family planning nonprofit sued Kansas to block the law, and in response, the state brought in Park and his firm to help defend it. Kansas lost and is now attempting to reverse its fortunes. Park co-authored the state’s petition for the Supreme Court to hear the case; the court is currently considering it.

That’s not the only recent reproductive rights controversy Park has been involved in. In 2017, the ACLU sued the US Department of Health and Human Services after the director of its Office of Refugee Resettlement attempted to block an unaccompanied minor immigrant from obtaining an abortion. Park represented the office’s director, Scott Lloyd, and his boss, Stephen Wagner, head of the Administration for Children and Families. (The individual action against the men was dropped not long after the lawsuit began, but it continued against HHS until a federal court ultimately allowed the girl to obtain an abortion.)

Park’s route to the Harvard University lawsuit came through his firm’s close affiliation with Edward Blum, a former Texas stockbroker who has been waging war on civil rights and affirmative action for two decades through his nonprofit, Project on Fair Representation. Blum is the force behind Students for Fair Admissions, the plaintiff in the Harvard lawsuit, and appears to be one of the firm’s biggest—and first—clients. Blum’s groups have been largely funded through a foundation called Donors Trust, a group Mother Jones described in 2013 as  “the dark money ATM of the conservative movement.” The donors to Donors Trust are not public, but the foundation contributed nearly $3 million to Blum’s projects between 2010 and 2015, and another $250,000 in 2016, according to the most recent tax filings. Park and Blum did not respond to requests for comment.

Before starting his own firm, Park’s law partner, William Consovoy, worked at a big DC firm where he helped Blum orchestrate the 2013 Supreme Court case Shelby County v. Holder, which demolished big parts of the Voting Rights Act and led to many of the measures Republicans have implemented over the past five years to suppress minority voting. When he founded his own firm in late 2014, Consovoy brought Blum with him as a client, and a few months later, Consovoy filed the lawsuit against Harvard that Park joined as soon as he became a partner in the new firm.

The firm currently represents Blum’s groups in about a half-dozen cases, including in a lawsuit attempting to overturn the California Voting Rights Act. It’s also representing Blum’s organization as he defends the Trump administration’s decision to include a question about citizenship on the 2020 census. Civil rights groups argue that the question will depress the response rate among immigrants and lead to undercounting—and underfunding—in places with large Latino populations. Park wrote an amicus brief for Blum’s Project on Fair Representation in one of the lawsuits challenging the question, supporting the Trump administration’s effort to dismiss the case.

Blum’s real bread and butter, though, has been his decade-long battle against affirmative action, starting with a case he first brought in Texas in 2008, Fisher v. University of Texas. Blum recruited the plaintiff—the white daughter of a friend—and orchestrated the lawsuit, hoping the case would lead to the end of the use of race in college admissions. The case twice reached the Supreme Court, both times with help from Consovoy, who represented Fisher. But in 2016, the high court reaffirmed the right of colleges and universities to consider race as a factor in admissions, dealing Blum a significant blow.

Park’s firm has close ties to Edward Blum, a former Texas stockbroker who has been waging war on civil rights and affirmative action for two decades.

That defeat didn’t put an end to Blum’s attacks on affirmative action. In 2014, Blum created Students for Fair Admissions, a group purported to represent extremely well-qualified applicants rejected from prestigious schools, as well as their parents and potential future applicants  That same year, represented by the Consovoy firm, the group filed suit against Harvard University and the University of North Carolina, arguing that the schools discriminate against Asian American applicants. Now, with help from Park, Blum is trying to get around the Supreme Court decision in Fisher or have it overturned through the Harvard case, now that the swing vote in Fisher, Justice Anthony Kennedy, has been replaced by the more conservative Justice Brett Kavanaugh.

Opening arguments in the Harvard case started October 15 in a Boston federal court, and the trial is expected to last several weeks. Critics have argued that Blum is simply using Asian American applicants to try to secure a Supreme Court ruling that would strike down the use of racial preferences everywhere, primarily to the benefit of white people. An expert hired by the school found that if Harvard were prevented from considering race in admissions, the percentage of black and Latino students would fall nearly 50 percent, while the number of white students would jump 8 percentage points, to nearly half the incoming freshman class. The Asian American share of the student body, meanwhile, would increase by only about 3 percentage points. (At 24 percent, it’s already far higher than the Asian American share of the country’s overall population, which is less than 6 percent.)

Park’s work on the Harvard case has civil rights groups concerned about his ascension to the 2nd Circuit. Jin Hee Lee, senior deputy litigation director for the NAACP Legal Defense Fund, says, “I find this case alarming in that it’s trying to undo long-standing precedent.”

Park’s record shows that his legal practice has tried to challenge all sorts of precedent. A lifetime appointment to the 2nd Circuit, which covers New York, Vermont and Connecticut, would give him a far more powerful perch to achieve that. “Michael Park has a demonstrated record of hostility to civil rights, and it is hard to imagine he would change his views as a judge,” says Jon Greenbaum, chief counsel at the Lawyers’ Committee for Civil Rights Under Law, which has been involved in the Harvard lawsuit on the side of minority students likely to be harmed by it. “He joined as a name partner to a firm whose agenda is dismantling core civil rights protections and he has taken extreme positions that any consideration of race is unconstitutional in college admissions, undocumented immigrants do not have the right to an abortion, and noncitizens should not be counted as people in reapportionment.”

The Trump administration has been rushing to fill vacancies on these appellate courts with conservative ideologues. So far, the Senate has confirmed 29 of Trump’s circuit court nominees, far more than for any other president—ever. During his eight years in office, President Barack Obama managed to fill 5 of the 13 active seats on the 2nd Circuit. (One of those judges has already taken senior status and will be replaced by a Trump nominee.) If Park is confirmed along with one other nominee named this month, Trump will have put three judges on that court in 2018 alone.