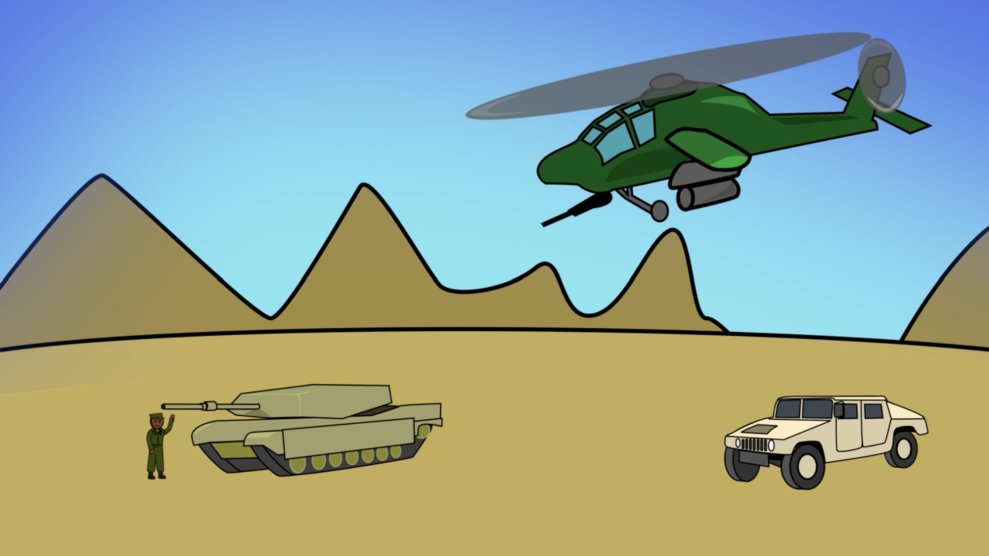 The Department of Defense unveiled a snazzy website redesign today, capping off what chief Pentagon spokesperson Dana White called a “long overdue” change and a way to “more completely share our military’s story with the American people.”

That strategy apparently included the production of a two-minute animated video which explains the five branches of the military using puns, cartoon pirates, and many ominous references not to mortal enemies with weapons of mass destruction, but “bad guys.”

“While there’ve been plenty of movies about our armed forces, most tend to exaggerate what our military does, day in and day out,” we’re told by a kindly-voiced narrator. “Here’s the real scoop about the Department of Defense and how our military keeps you safe!”

First up is the Army, which we apparently includes as many people “as the population of Atlanta.” Their job is “to fight and win our nation’s wars.”

The Navy, lest we forget, is “all about the water. They work on it, above it, and below it.” Because of America’s naval power, “things like food, electronics, and cars” can travel the seas safely. Our naval forces also, apparently, fight really cute cartoon pirates!

The Air Force has our back in the “air, space, and cyberspace.”

They drop bombs too—or, as the half-glass-full narrator puts it, fight “bad guys all around the world.”

Bringing up the rear is the Coast Guard: “a drug dealer’s worst enemy and a boater’s best friend.”

The video rocketed around social media on Wednesday, but might not have garnered the type of reaction DoD was expecting. Here are a few responses:

I think the Department of Defense is microdosing pic.twitter.com/julDkQrNOR

In the military, you be a soda jerk, a Princess Leia or cosplayer, Prince impersonator, or LeVar Burton as Geordi on Star Trek… #KnowYourMil pic.twitter.com/qwIKVAxdxN

The military is about … ice cream, pirates. Welcome to the new Department of Defense home page. https://t.co/oZY3sc5VFS pic.twitter.com/2en18SRExM

I have questions about what the Marines are doing with this stranded pirate pic.twitter.com/aMGZ7Di1PZ

Spencer Ackerman, a national security reporter for the Daily Beast, may have had the most common reaction.