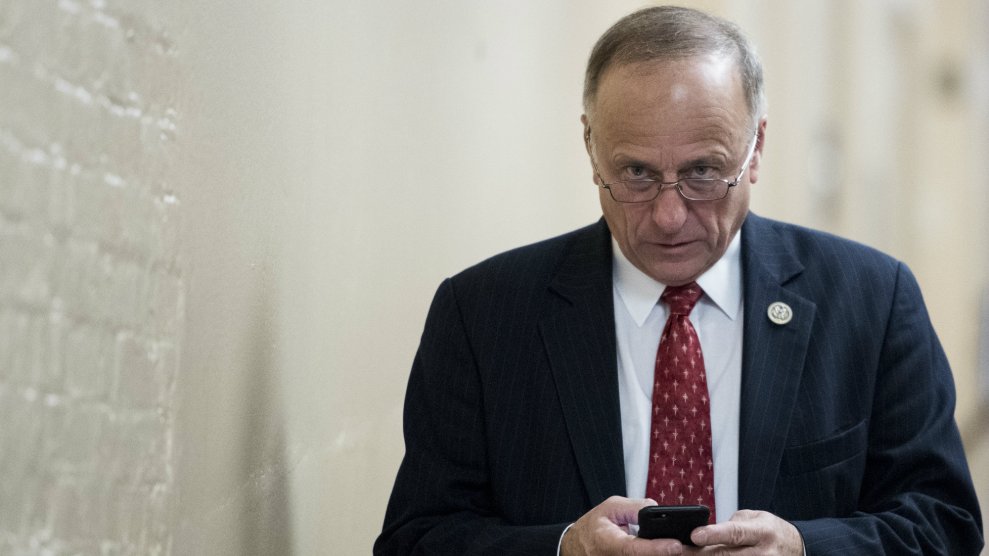 The Anti-Defamation League, a 115-year-old civil rights organization dedicated to fighting anti-Semitism, called on Speaker of the House Paul Ryan to strip Rep. Steve King (R-IA) of his chairmanships and formally censure him, according to a letter obtained by Mother Jones.

“We write to call to your attention an extraordinarily disturbing series of involvements and statements by Representative Steve King that are anti-Semitic and offensive not just to the Jewish community, but to all Americans,” wrote Jonathan Greenblatt, the ADL’s chief executive.

King says “I don’t think about George Soros as a Jew.”

A spokesperson for Ryan was not immediately available to comment.

Greenblatt said the massacre at Tree of Life synagogue in Pittsburgh, where 11 people were killed in the worst anti-Semitic attack in American history, reminded him “that silence in the face of anti-Semitism and hate is acquiescence. It is to enable it.” King is a member of the House’s Agriculture, Small Business, and Judiciary committees. He is chairman of the latter’s Subcommittee on the Constitution & Civil Justice.

In recent weeks, the congressman has drawn particularly strong criticism for endorsing a white nationalist candidate for Toronto mayor and meeting with members of an Austrian far-right party during an overseas trip. In his letter, Greenblatt noted that Austria’s Jewish community “boycotts the party in its entirety” due to a troubling history of anti-Semitism. In one instance, a party leader in the city of Imst posted a flyer with Hitler’s image and the caption, “Adolf, Germany needs you.”

While in Vienna, King was interviewed by Unzensuriert, a news outlet HuffPost called a “far-right propaganda site,” where he said Muslims and liberals “have teamed up against Western civilization.” As my colleague Sophie Murguia reported at the time:

King seemed to agree with the interviewer when she brought up a racist conspiracy theory called the “Great Replacement,” which holds that European civilization is being wiped out by nonwhite migrants. “The US subtracts from its population a million of our babies in the form of abortion,” King said. “We add to our population approximately 1.8 million of ‘somebody else’s babies’ who are raised in another culture before they get to us. We are replacing our American culture 2 to 1 every year.”

King attributed the “Great Replacement” to George Soros, a Jewish philanthropist who has become a bogeyman on the right for his widespread donations to progressive causes. Soros, who some right-wing commentators have falsely blamed in recent days for funding the migrant caravan heading to the US-Mexican border, was one of the intended recipients of pipe bombs sent last week by Cesar Sayoc, an avowed Trump supporter who shared far-right conspiracy theories online. Sayoc and Robert Bowers, the gunman in the Tree of Life shooting, both displayed a deep animus toward Soros on social media.

King has denounced the bombing attempt, and denied that his criticism of Soros is anti-Semitic. But he has refused to tone down his rhetoric. “His money floats in in such a way you can’t see the flow,” King told the Washington Post, “but if you trace it back, you can connect it to his foundation.”

Back home in Iowa, King is in a close race against Democrat J.D. Scholten. As of Wednesday, polling aggregator FiveThirtyEight gave King a 51.1 percent chance of keeping his seat.