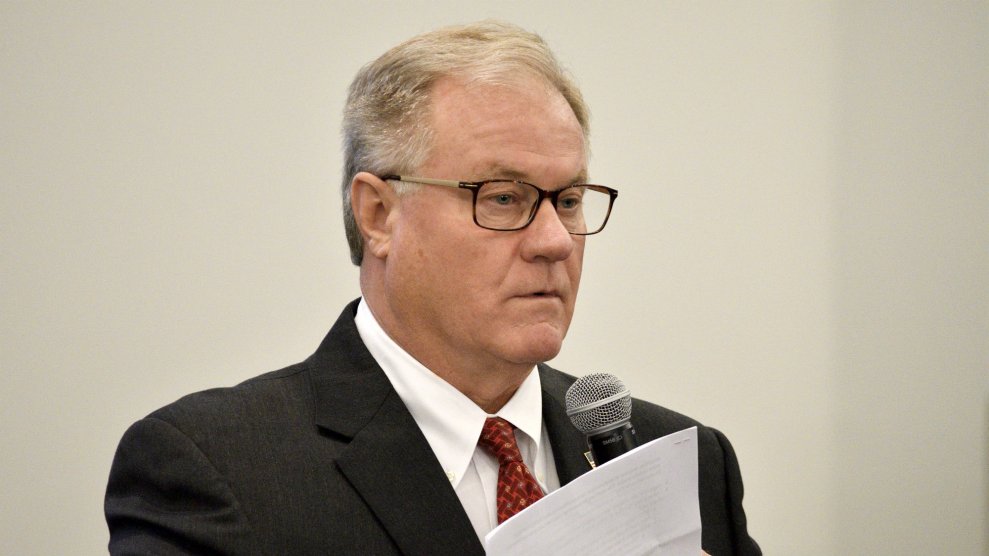 A battle for the governor’s seat in one of the country’s perennial swing states focused on violence and mental stability this week amid the fallout from Republican Scott Wagner’s promise to “stomp all over” his opponent’s face with “golf spikes.”

Wagner, who is the founder of a waste management business and represented part of York County in the statehouse, has trailed incumbent Democratic Gov. Tom Wolf by double digits in every major poll. He made the bizarre threat during a live video on his campaign’s Facebook page on October 12. Hours later, Wagner walked the statements back and removed the original video. “I may have chosen a poor metaphor,” he said in video tweeted out on his official account. “I shouldn’t have said what I said.”

Three days later, Wolf’s campaign fired back with an online ad that calls Wagner “unhinged” and features other instances where he has made similar threats of violence.

Among the incidents highlighted in the ad:

Wagner, whose campaign website trumpets his “straight talkin'” style, has been criticized before for some controversial rhetorical choices. Last month, on the campaign trail, he recounted an extended analogy—originally cribbed from Infowars—that in part compared undocumented immigrants to “rabid, messy, mean raccoons” that “have overtaken your basement.” As a businessman-turned-politician with a populist tone, Wagner has drawn frequent comparisons to Trump and, in August, received the president’s support at a Keystone State rally.

The original threat to “stomp all over” Wolf’s face received wide bipartisan condemnation last week, including a reprimand from House Majority Whip Steve Scalise (R-La.), who had previously accused Democrats of working to “incite even more harassment and violence.” (During a practice last year for the annual Congressional Baseball Game, Scalise was shot by a former volunteer for Bernie Sanders’ presidential campaign.)

These comments are totally unacceptable. As I’ve said many times before, there is absolutely no place in our politics for this kind of rhetoric. https://t.co/7GgDITKGM9