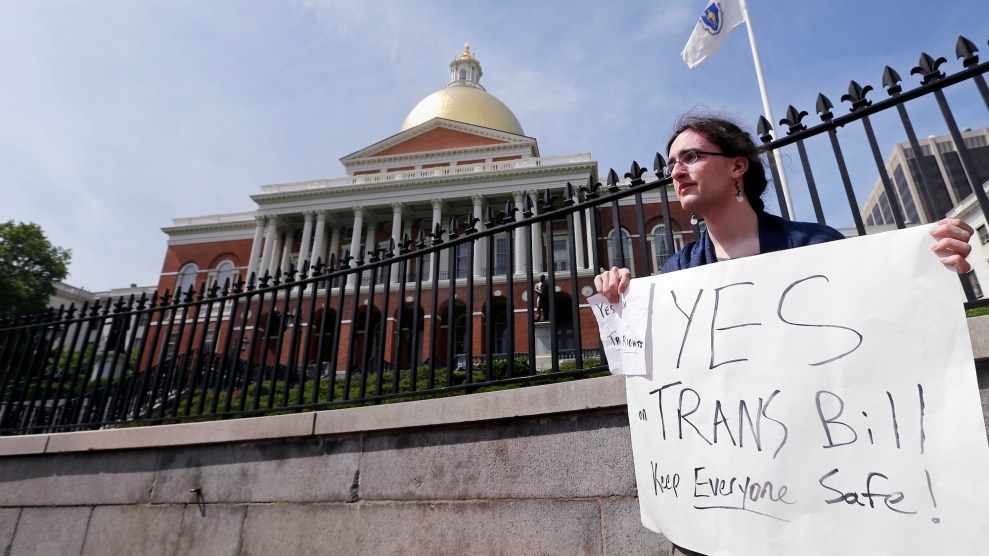 A transgender-rights activist demonstrates in front of the Massachusetts State House in June 2016.Charles Krupa/AP

When Massachusetts Gov. Charlie Baker told reporters in May 2016 he would sign a bill protecting transgender people from discrimination in public spaces, it was a huge win for Kasey Suffredini. “We were finally successful,” says Suffredini, the co-chair of Freedom for All Massachusetts, a coalition of advocacy groups that had been fighting for the civil rights of transgender people for as long as 10 years. “Everybody is safe when everybody is treated with dignity and respect.”

But the battle wasn’t over. A group called Keep Massachusetts Safe had protested the bill, making the common anti-transgender claim that the so-called “bathroom bill” would allow men to go into women’s and girls’ restrooms, locker rooms, or dressing rooms. Soon after the anti-discrimination bill became law in July 2016, Keep Massachusetts Safe began the process to try to repeal it. Now, its repeal referendum is on November ballots as Question 3, which asks voters if they “approve of” the current law.

A repeal referendum needs about 32,000 signatures to qualify for the ballot in Massachusetts, a much lower number than regular initiatives. “We don’t take the fact that this did qualify as something that undermines our confidence in the majority of Massachusetts voters,” says Suffredini. So far, it seems unlikely that voters will strike down the law. A University of Massachusetts-Lowell and Boston Globe poll conducted in early October found that 74 percent of likely voters would vote “yes” to keep the law on the books. Freedom for All Massachusetts has also massively outraised its opponents. It had about $1.3 million as of early October; Keep Massachusetts Safe had just shy of $34,000.

Yet Suffredini is worried that the law, and by extension transgender rights, is up for debate again. “Whether or not it’s tolerable to have transgender people in public spaces, whether or not we feel safe and welcome by our fellow neighbors—I worry about the impact that has on young people who are trying to figure out how they’re going to live the lives they were born to lead,” he says.

The ballot question is also potentially confusing. Typically, a referendum asks voters to pick “yes” to repeal a law and “no” to uphold it. “It’s a little bit counterintuitive.” Suffredini says. “If voters are unsure of what to do, they tend to vote no.” Pollsters also think that Question 3’s wording may puzzle voters. “Nearly a quarter of respondents gave inconsistent answers on their views when asked about the ballot question,” wrote Joshua Dyck, co-director of UMass-Lowell’s Center for Public Opinion.

While the repeal initiative is unusual, it is not without precedent. In 2015, nearly two-thirds of voters in Houston, Texas, elected to repeal the Houston Equal Rights Ordinance, which had banned discrimination based on gender identity and sexual orientation, just 18 months after it went into effect. The campaign to repeal HERO was largely based on transphobic “fear-mongering,” as then-Mayor Annise Parker put it, with high-profile figures like former Astros player Lance Berkman claiming the ordinance “would allow troubled men to enter women’s public bathrooms, showers and locker rooms.” Texas Monthly reported that anti-HERO campaigners lent their support to the backers of similar initiatives in Mississippi and North Carolina. (North Carolina’s 2017 repeal of HB2, which provided similar protections, was the most visible of these efforts, but that repeal was passed by the state Legislature rather than voters.)

Keep Massachusetts Safe’s argument behind Question 3 rests on the fears that the anti-discrimination law “puts women, children and vulnerable minorities [sic] safety at risk” by allowing “any man who says he is a woman“—including sex offenders—into bathrooms and other spaces meant for women and girls. (Keep Massachusetts Safe, which is an offshoot of the Massachusetts Family Institute, “a nonprofit organization that advocates for Judaeo-Christian values on Beacon Hill,” did not respond to multiple requests for comment.)

However, there is no demonstrable evidence for such claims. This summer, researchers at the University of California-Los Angeles published a study in the peer-reviewed journal Sexuality Research and Social Policy that found no link between gender-identity-inclusive nondiscrimination ordinances and reported criminal incidents in Massachusetts cities and towns. In fact, reports of privacy and safety violations in public restrooms, locker rooms, and changing rooms are “exceedingly rare,” the authors wrote. “This study provides evidence that fears of increased safety and privacy violations as a result of nondiscrimination laws are not empirically grounded.”

To counter the arguments against the law, Freedom for All Massachusetts has released videos featuring transgender teenagers, a retired police chief, and other Massachusetts residents who support the “Yes on 3” campaign.

The first statewide bill prohibiting discrimination based on gender identity was passed in Massachusetts in 2011. It originally included protections for transgender people in public accommodations such as restrooms and locker rooms, but that language was stripped from the final bill before it was signed into law. Freedom Massachusetts, a predecessor of the Yes on 3 campaign, formed in 2015 to update the law to include protections in public places. Transgender activists were instrumental in getting the current law passed. “I think the power, the depth and breadth of that coalition showed in the the vote of the Legislature,” Suffredini says, noting that the 2016 law had bipartisan support in both houses of the Legislature and was signed by a Republican governor.

For Suffredini, the heart of this campaign is ensuring a safe future for young transgender people. “A lot of these young people have spent a number of years in their childhood just fighting just for basic fairness,” Suffredini says. He recalls a 14-year-old transgender boy who spoke before lawmakers on Beacon Hill when the anti-discrimination bill was being debated in 2015. “He got up and testified at the hearing, and he said, ‘I need you to pass this law so I can go back to being a kid again.'”