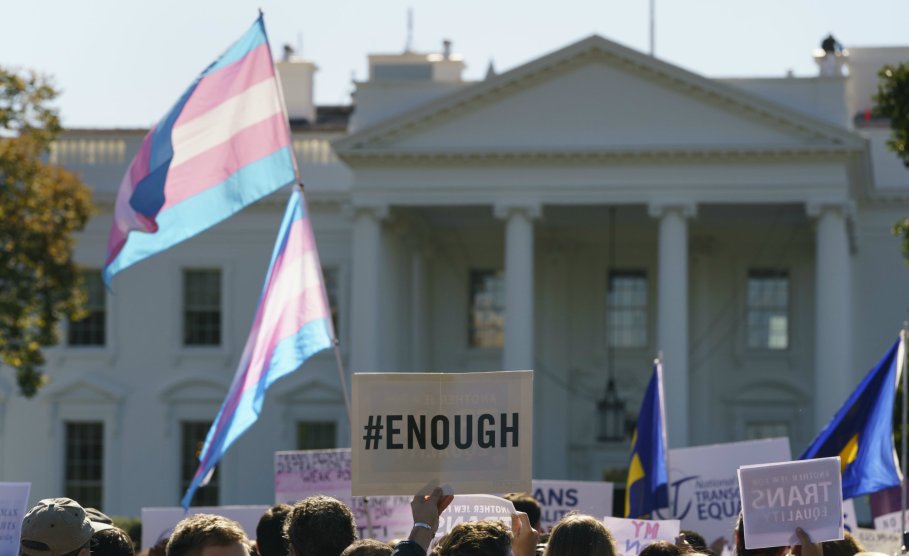 Recently, bad news for the transgender community has increased. Just last week, the  New York Times reported on a draft memo from the Department of Health and Human Services and noted, “The department argued in its memo that key government agencies needed to adopt an explicit and uniform definition of gender as determined ‘on a biological basis that is clear, grounded in science, objective and administrable.’” The report went on to say that government agencies should “define sex as either male or female, unchangeable, and determined by the genitals that a person is born with.” Soon after the story ran, calls to Trans Lifeline, a crisis support line for trans people, quadrupled. (If you need support, you can contact the Trans LifeLine by calling 877-565-8860).

If implemented, the policies would effectively erase federal recognition for an estimated 1.4 million transgender American. It could limit their access to housing, healthcare, public accommodations, and other services, while simultaneously making it harder for trans people to seek legal recourse for discrimination.

“Being transgender in the Trump era is a lot like moving through thick fog, stifled, unable to see more than a few feet in front of you at a time.”

This memo was the culmination of a series of rollbacks by the Trump administration of trans rights. “Being transgender in the Trump era is a lot like moving through thick fog, stifled, unable to see more than a few feet in front of you at a time,” wrote Samantha Allen, a reporter for The Daily Beast, in an poignant account of her call to the Trans Lifeline.

Fog is an apt metaphor given the confusing and often difficult to understand directives from the administration. Since taking office, the Trump administration has taken steps to roll back numerous civil rights policies, nixing guidance that protected trans kids in public schools and reevaluating the Obama administration’s interpretation that the Affordable Care Act provide access to gender affirming medical care.

The administration has also attempted to ban trans people from serving in the military, an effort that was met with internal opposition in the Pentagon. The week that the New York Times reported the story about the memo, the Department of Justice filed a brief to the Supreme Court arguing businesses should be able to discriminate against workers for being trans. Several transgender people have reported difficulty obtaining gender affirming passports. While the State Department says nothing has changed, it did update the “gender designation policy” by replacing “gender” with “sex,” in September. Many in trans communities see a connection between this and the new definition of “sex” proposed in the HHS memo.

Katelyn Burns, the only openly transgender reporter on Capital Hill, has argued that misleading, sometimes irresponsible coverage of trans people by the media has emboldened Trump to more easily roll back trans rights. “Even supposedly liberal news outlets like the New York Times and the Atlantic have used a debate over the lives of transgender people as a quest for clicks,” she writes. “The issue with that framing is that losing such a debate results in a loss of human rights for an already heavily marginalized community—and that’s what we’re seeing now.”

That’s why Mother Jones wants to hear from you. Let us know how the Trump administration’s rollback of trans rights has affected you. Do you have a story you’d like to share, or an idea about another story affecting your communities we should be reporting on? Fill out the form below, send us an email at talk@motherjones.com, or leave us a voicemail at (510) 519-MOJO. We may use some of your responses in a follow-up story.