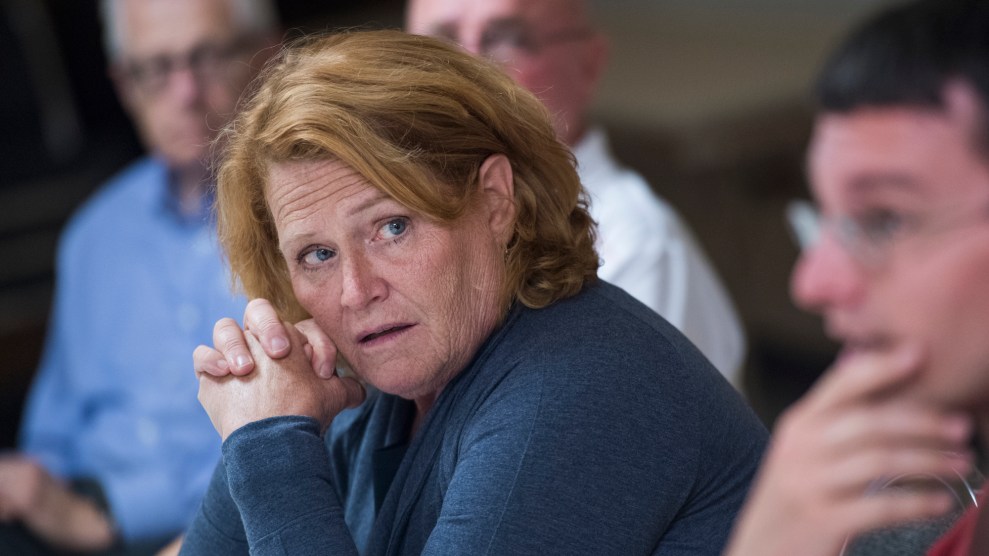 Sen. Heidi Heitkamp (D-N.D.), who is locked in a heated reelection race with Republican Rep. Kevin Cramer, ran a campaign ad in several North Dakota newspapers Sunday that listed the names of numerous women that the ad described as survivors of domestic violence, sexual assault, and rape. But it turns out that some of those listed had not given the campaign permission to identify them publicly, while others say they are not, in fact, survivors of sexual violence. Now, Heitkamp is apologizing.

The ad, which was styled as an “Open Letter to Congressman Cramer” and supposedly signed by more than 125 survivors, blasted Cramer’s recent criticism of the #MeToo movement and the sexual assault allegations against Brett Kavanaugh. In an interview last week, Cramer said that #MeToo is a “movement toward victimization,” adding that his female relatives didn’t understand #MeToo because they are “pioneers of the prairie…tough people.”

Heitkamp’s newspaper ad made the case that survivors, especially those who are Native women and girls, are “prairie tough” when they decide to speak out about sexual violence despite the pressure to remain silent. “We are here to let you know that we have all suffered from domestic violence, sexual assault, or rape—and that yes, we expect somebody to believe us when we say it,” the ad said. “Because it happened.”

But Lexi Zhorela, a 24-year-old hairdresser from Bismarck who learned of the ad on Monday night, told the Associated Press that she had shared her experience of sexual assault in confidence with a few friends. One of them tagged her in a Facebook post, apparently resulting in her inclusion on the list, she believed. “I have only shared my story with a couple of people in confidence,” Zhorela said. “I didn’t want it blasted for the world to see.” Meanwhile, conservative commentator Rob Port, of the North Dakota politics blog SayAnythingBlog.com, identified at least four women who said they did not give permission for their names to be posted or who were not survivors of sexual violence.

Heitkamp apologized for the ad on Tuesday. In a statement, she explained that her campaign had produced the ad with the help of victim advocates, and that “several of the [women whose names] were provided to us” did not give their permission for their names to be shared, or were not survivors of abuse. “I deeply regret this mistake and we are in the process of issuing a retraction, personally apologizing to each of the people impacted by this and taking the necessary steps to ensure this never happens again,” Heitkamp said.

“All I can say is at the end of the day when I put my head on the pillow I know that I caused hurt…this was incompetent. This was wrong,” Heitkamp added during an appearance Tuesday on Port’s radio show. “This should have never happened.”

Cramer—who has been extensively criticized for his recent comments on sexual violence—told the AP that the ad was a “revictimization” of survivors. “This is what happens when desperate people do things for their own personal political gain,” he said.

Heitkamp had been cheered as a champion for survivors after voting against Kavanaugh’s confirmation, despite intense political pressure to support him. Donations to her campaign spiked after she announced her “no” vote, though she had been losing ground to Cramer in the polls even before her Kavanaugh decision.

After learning of the ad, Zhorela decided she would no longer vote for Heitkamp, she told the AP. It remains to be seen whether other survivors follow suit.