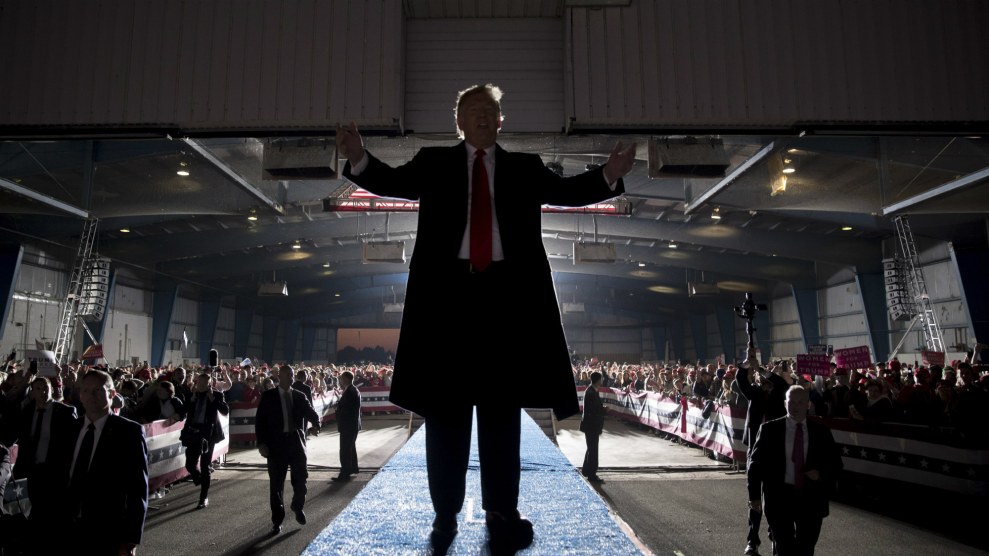 Donald Trump has spent the last two years making the Republican Party about himself—dominating the policy decisions, forcing GOP lawmakers to recast themselves in his image, and hoovering up tens of millions of dollars in campaign contributions that otherwise might have ended up in congressional campaign coffers. But now, in his last-minute salvo before the election, there is mysteriously no Trump.

Trump’s 2020 campaign, which has raised a whopping $60.6 million, is spending $6 million to plaster a lengthy, one-minute campaign ad across national airwaves and cable networks for the next seven days. And the ad, released Monday morning, targets a demographic that is Trump—and the Republican Party’s—greatest weakness: college-educated suburban women. But despite total Trump-centrism since the last election, this big final push by the Trump campaign has absolutely no mention of the president until a tiny credit at the end of the spot.

In the ad, a woman and her family move into a new house, and as she prepares her young daughter to attend violin lessons, she recalls news clips of how bad things were back during the Great Recession, juxtaposed with better media coverage of the economy today. Then, in a not-so subtle reminder that no one will know how you vote on Election Day, the woman pauses before leaning into the shadows of a voting booth and checks the box for a female Republican candidate. The ad then shows the woman and her husband proudly watching their daughter perform a violin concert in the future. The ad closes with the tagline: “Things are getting better. We can’t go back.”

There’s no Trump and none of his catchphrases. In fact, the closest the ad gets to a mention of Trump is a radio voice intoning, “Look we can’t get distracted from the biggest issue, which are jobs and our kids’ futures”—an obvious reference to Trump’s tendency of veering off message and into controversy.