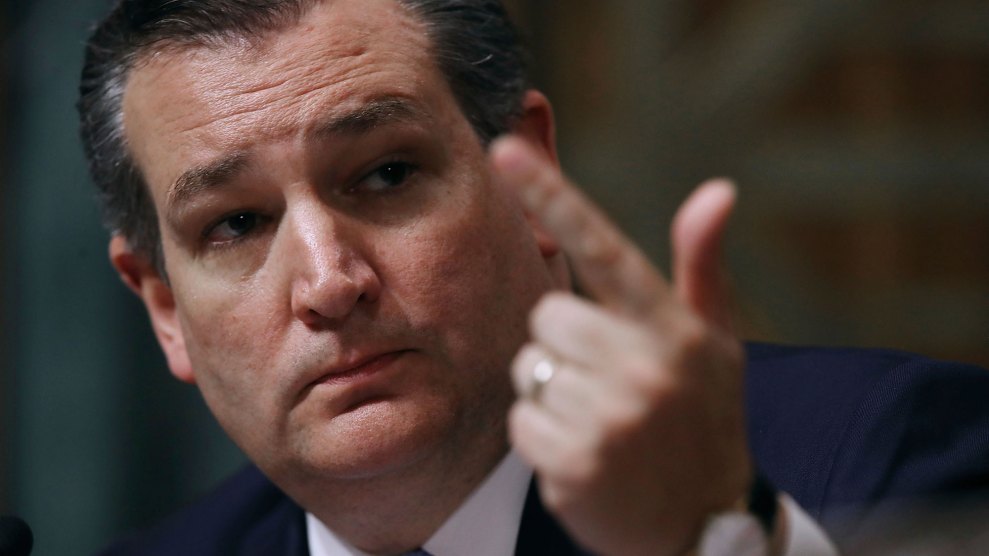 Two years ago, Ted Cruz stood up the president. On Wednesday, Donald Trump Jr. came to Wichita Falls, Texas, to tell Republican voters that all was forgiven.

With a little more than a month to go before election day and control of the Senate possibly on the line, national Republicans have shifted into overdrive to rescue Cruz from a historic upset at the hands of Democratic Rep. Beto O’Rourke. The Club for Growth is spending big bucks. The National Republican Senatorial Committee is considering an intervention. And the Trumps themselves are wading in—President Donald Trump is expected to follow in his son’s footsteps later this month at the “biggest stadium in Texas we can find.”

Don Jr. stumping for Cruz is, on its surface, extremely weird. During the 2016 primary, Trump famously promised to “spill the beans” on Cruz’s wife, Heidi, and promoted a tweet that contrasted an unflattering photo of Heidi with a glamor shot of Melania Trump. Trump also suggested that Cruz’s dad, who is Cuban-American, had helped to assassinate President John F. Kennedy. Cruz cited these attacks after he refused to endorse Trump during his 2016 convention speech. Then he went on to campaign for Trump anyway.

So Don Jr. was not just there for the purposes of trashing O’Rourke (although he did); he was also there to shoot the elephant in the room.

And he did, right off the bat. As Don Jr. explained to the partisan crowd, he met Cruz a few months after the convention at a conservative dinner:

I was seated at the Texas table, and it was a lot of my friends and a lot of Ted’s friends….so the first few seconds were a little bit awkward, but both of us started having good conversation, as we should, and at the end of that meal, all the guys were like “Hey Don, let’s go back to the Trump Hotel on Pennsylvania Ave. and we’ll hang out in the lobby, some of them will have a couple drinks.”

Not wanting to miss out on an opportunity for a few laughs, Don Jr. then paused the story to make a joke about Supreme Court nominee Brett Kavanaugh. “I know that in this week in particular you’re not allowed to have a beer if you are a conservative,” he said. “Now if you’re a liberal, you can do cocaine and you can be the president. But that’s okay. That’s okay. We’ll hold ourselves to a different standard and that’s fine.” (Ahem.)

After that dinner, according to Don. Jr., he and Cruz made up:

I said to Ted, “Hey, you’re more than welcome [if] you want to come back with us.” And Ted Cruz came back with us and this group of Texas boys sat in the lobby of the Trump Hotel two months after a contentious primary for three hours. And we had a ball, formed a good relationship. And let me say this: That wasn’t easy. I mean that as the highest compliment. I don’t know if the shoes were reversed that I could have done it. I’d like to believe that I could. But that’s a testament to this man’s character. From that moment on—no listen, we have to talk about it. That’s the elephant in the room that the media will run with from moment one. That is the reality. From that moment on, this man has fought for you.

Echoing fears voiced by Republicans elsewhere, Don Jr. warned the audience against a common belief on the right that media outlets are lying about polls that suggest a big year for Democrats. (The president himself has suggested there will be a “red wave.”) “We’ve got a dynamic here in Texas,” Cruz warned, when it was his turn. “We are gonna see record-shattering Democratic turnout here in November.”

Don Jr. is many things—an owner of flannel shirts; a Wharton grad, however inexplicably; someone who thinks the amendments in the Bill of Rights were ordered by significance—but he is, above all else, an emissary. His visit is a reminder that the factionalism Cruz’s convention speech seemed to herald has been smoothed over by necessity. Trump needs the Republican party, and right now, Republicans really need Trump, too.