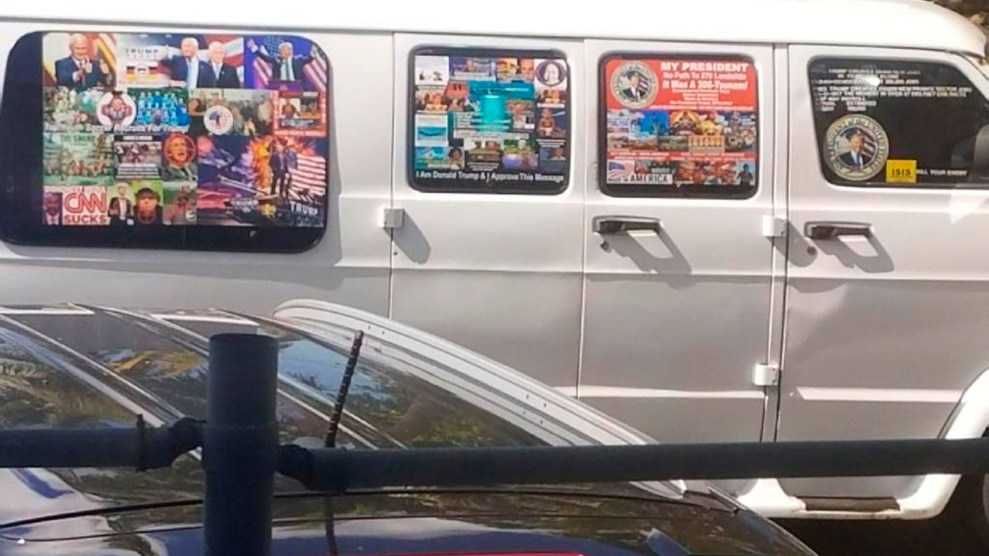 The last text that Justin Humberger received from Cesar Sayoc, the suspect behind the attempted bombing spree that targeted the Clintons, the Obamas, George Soros, and other Trump critics, came on Tuesday morning. Sayoc sent Humberger, who had recently become a business partner of Sayoc, a New York Times story reporting that a pipe-bomb had been delivered to Soros’ home. Humberger had no idea why Sayoc was sharing that with him.

Humberger knew Sayoc as a tour manager for a group of male strippers that once included Humberger. And this past summer, Humberger, a thirty-something Florida resident who has asked that some of his personal details be withheld, entered into a venture with Sayoc to develop a vertical farming business. “Whenever you talked to Cesar, the conversation would go to politics,” Humberger recalls. “He clearly was a strong Republican. But he was not violent.” Humberger says he was stunned to learn of Sayoc’s arrest.

Humberger first got to know Sayoc about two and a half years ago. Humberger was working as a male entertainer and was booked on two tours—each about a month long—as part of a small crew of strippers. “We’d be booked into any club where you can strip without getting arrested in that state or county,” he says. Sayoc managed the trips. The men traveled to their gigs in Sayoc’s van, which Humberger believes is the same vehicle now covered with pro-Trump and anti-Democrat messages that was seized by law enforcement officials. Humberger considered Sayoc an effective tour manager: he was punctual, organized, kept tabs on all the performers, and didn’t get wasted after the shows.

Humberger left in the middle of the second tour, and that was the last he saw of Sayoc until a few months ago, when Sayoc called Humberger and said he wanted to get out of the entertainment business and move into a new line of work. He asked Humberger for advice on what sort of businesses he should explore. Humberger did some research and discovered that only 1 percent of agricultural companies were involved in vertical farming—that is, growing in vertical layers, perhaps within a building. “It’s farming up,” Humberger says.

Sayoc and Humberger decided to pursue such a business together. In July, Sayoc registered a company in Florida called Ver Tech Ag. He and Humberger were each listed as a manager. They opened up a bank account. “But that’s as far as it got,” Humberger says.

Humberger didn’t talk politics with Sayoc. He says he has little interest in politics. But Sayoc would occasionally send him texts related to politics. Several texts recently focused on the fight over Brett Kavanaugh’s Supreme Court appointment, including one message that called Christine Blasey Ford, who accused Kavanaugh of sexual assault, a “democrat hack.” In another message, Sayoc told Humberger that if “you gonna watch anything on how democrat party became a criminal empire partnering with FBI, Hilary Clinton, Obama, Bernie Sanders, Elizabeth Warren,” he should watch a video featuring rightwing conspiracy theorist Dinesh D’souza. “You will understand,” Sayoc texted, “what has been going on Trump stops dead in its tracks cleaning up.” By this point, Humberger had a routine: he would open and close these kinds of texts from Sayoc to get rid of the notifications on his phone and not pay them attention. Consequently, he didn’t think much of the text Sayoc sent him about a bomb being found at Soros’ home.

Humberger says that he noticed no profound change between the Sayoc he knew two and half years ago and the Sayoc with whom he tried to start a business. “I didn’t think of him as fringe or as an extreme type of guy,” he remarks. He reports that he has searched his memory and has found no clues that would explain the current moment. “I don’t have any explanation for this,” he notes. “None at all.”

Throughout Friday afternoon, Humberger was besieged by calls from reporters. But he had not yet been contacted by the FBI or law enforcement. “I just went home to wait for them,” he says. “I’m sure they’ll get around to me eventually.”