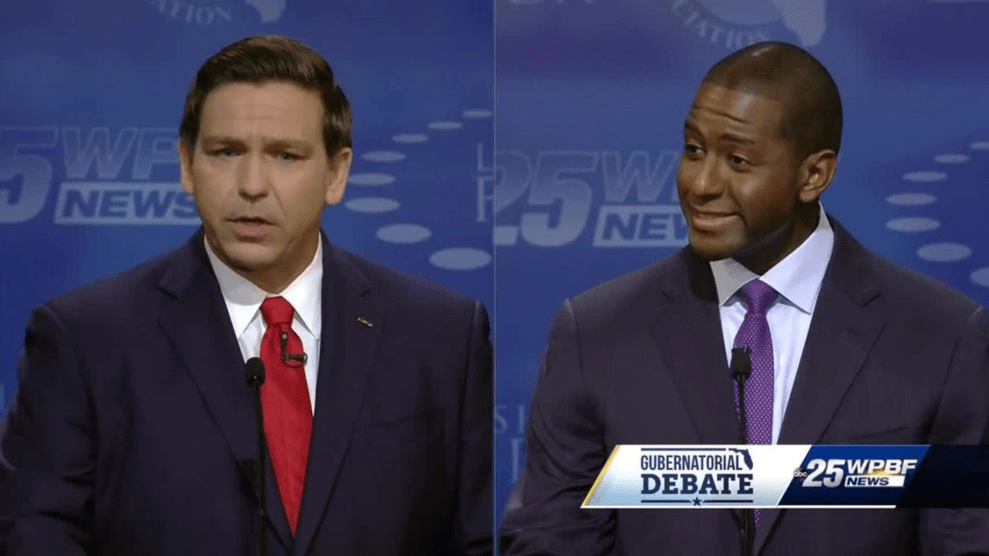 “I’m not calling Mr. DeSantis a racist,” Gillum said. “I’m simply saying the racists believe he is a racist.”

During a Fox News interview in August, DeSantis told voters not to “monkey this up” by electing Gillum, which many described as a racist dog whistle. When Wednesday’s moderator, WPBF’s Todd McDermott, began to ask about the comment and positive statements made by DeSantis about conservative activist David Horowitz—who once said, “The country’s only serious race war” is against whites—the former congressman cut him off, saying, “How the hell am I supposed to know every single statement somebody makes?…I’m not going to bow to the altar of political correctness.”

Gillum followed the remarks with, “My grandmother used to say a hit dog will holler and it hollered through this room.”

As my grandmother used to say — a hit dog will holler. pic.twitter.com/kC34Ldd0is

On Tuesday, Florida residents received a robocall from Idaho-based white supremacist group TheRoadToPower.com that called Gillum a “Negro,” played to the sound of chimpanzee calls. It wasn’t the first set of racist robocalls sent in support of DeSantis, whose campaign has condemned the calls.

If elected, Gillum, 39, would be Florida’s first African American governor. He’s campaigned on expanding Medicaid, raising the minimum wage to $15 per hour, and enacting gun control. Meanwhile, 40-year-old DeSantis, a US Navy veteran, is endorsed by President Donald Trump. His campaign has focused on strengthening Florida’s immigration policies and—in a rare departure from Republican politics—beefing up environmental protection. (Florida’s coast has been devastated by toxic red tide this election season.)

In the first gubernatorial debate, on Sunday, Gillum said DeSantis is “an election-year environmentalist,” while DeSantis called Gillum a “failed mayor.” DeSantis also questioned Gillum about accepting a ticket for the Broadway musical Hamilton from undercover FBI agents acting as businessmen. “Did you pay for the Hamilton tickets?,” DeSantis asked on Sunday. On Tuesday, new records surfaced suggesting Gillum “knowingly accepted a ticket to the Broadway show ‘Hamilton'” from “men he believed to be businessmen” but who were actually FBI agents, according to the New York Times.

On Wednesday, Gillum responded to the accusations, restating he received the ticket from his brother, Marcus Gillum, at the theater and didn’t know it was paid for by the agents. “I take responsibility for not asking enough questions,” he said, adding, “We’ve got 99 issues in Florida, and Hamilton ain’t one.”