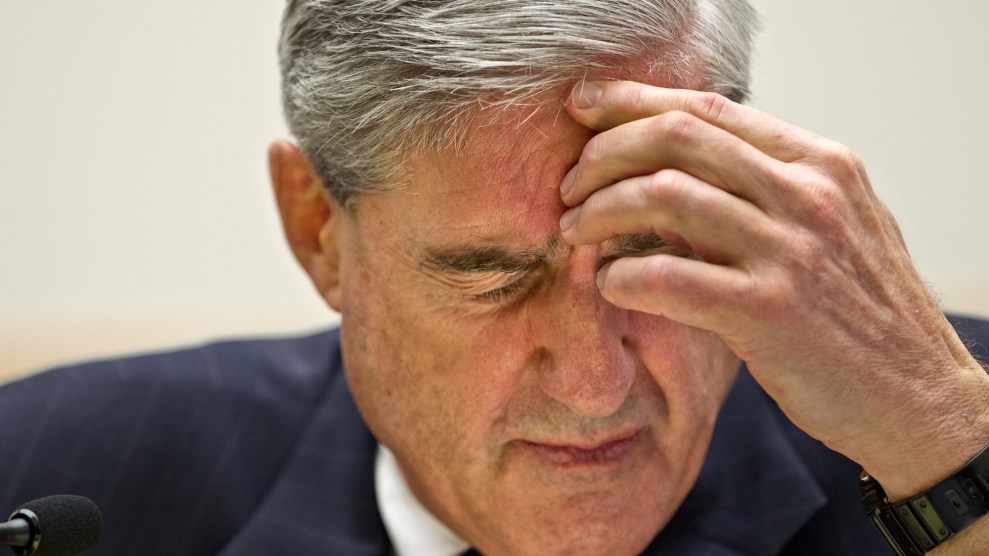 Special Counsel Robert Mueller’s office has asked the FBI to investigate allegations that shameless Republican self-promoter and conspiracy theorist Jack Burkman offered an initially unnamed woman tens of thousands of dollars to falsely accuse Mueller of sexual misconduct. That much is true. The Atlantic reported it, and Peter Carr, a spokesman for Mueller’s office, confirmed in a statement, “When we learned last week of allegations that women were offered money to make false claims about the Special Counsel, we immediately referred the matter to the FBI for investigation.”

But the story gets much more convoluted from there. There is no evidence that Lorraine Parsons, the woman accusing Burkman of soliciting false accusations, actually exists. There’s also reason to believe that the email “she” sent to multiple reporters about the alleged payoff scheme may have been designed to trick the media into reporting a made-up allegation against Burkman.

When Mother Jones asked Burkman about the woman, he said, “That’s a person who doesn’t exist.” He added, “I know nothing of the email. I didn’t send it. I didn’t authorize anybody to send it.” The woman in the Atlantic article sent her accusations to reporters including freelancers Scott Stedman and Yashar Ali and Hill Reporter‘s Ed and Brian Krassenstein, brothers who have gained large Twitter followings by attacking President Donald Trump. They all could find no evidence that Parsons is a real person.

Burkman is best known for his role in promoting conspiracy theories as part of his supposed effort to solve the murder of Seth Rich, a Democratic National Committee staffer killed in 2016 in what police identified as a mugging gone awry. Burkman has long gone to great lengths to get media attention—including calling for the NFL to ban gay players despite the fact his brother is gay. Earlier this year, Kevin Doherty, one of Burkman’s former Rich co-investigators, tricked Burkman into thinking he was an FBI official with dirt on then-FBI Deputy Director Andrew McCabe. When Burkman followed his informant’s instructions and went to a parking garage to pick up supposedly incriminating documents, Doherty allegedly shot Burkman and ran over Burkman and his dachshund, Jack Jr.

Burkman’s lobbying record includes its own theatrics. When the Hill reported that his firm signed up 70 clients, Burkman admitted that his desire to be “squeaky clean” may have led him to register more clients than he needed to. Two clients I spoke with said they paid Burkman less than the amount he reported to the government, and a similar discrepancy involving a third client appears in a court document. (Burkman says he doesn’t personally prepare the reports but tells everyone he works with to be “100 percent accurate.”)

Few of his clients have worked with a Washington lobbyist before. Desert Lakes University, which like many of Burkman’s clients lacks a working phone number, boasts on its Facebook page that it provides “education for individuals to prepare them for the future without charging the for tuition [sic].” Desert Lakes’ website went offline several years ago. Burkman calls the school a startup. Another client, the Black Moon Corporation, hopes to build a repository of genetic material akin to the library of Alexandria inside a crater on the moon.

It is unclear what Burkman is up to with his latest stunt. Burkman says a woman—a real woman—will accuse Mueller of sexual assault at a press conference Burkman is hosting Thursday at a hotel outside Washington. Earlier this year, he told reporters someone would come forward in person, at the same hotel, with evidence the government had killed Rich. Instead, a man with an incoherent story made the accusation on speakerphone. There’s no reason to think Thursday’s press conference will turn out any better.

The Hill Reporter story lays out a case for why the Parsons email appears to be a hoax. After the Krassensteins received the Parsons email and called the number “she” provided, they soon received a text stating, “You’re in over your head…. Drop this.” A man who said he was calling from a company called Surefire Intelligence soon told Hill Reporter to stop contacting the woman as well.

Jennifer Taub, an associate professor at Vermont Law School, received a similar email from Surefire Intelligence, the Atlantic reported later Tuesday. “It’s my understanding that you may have had some past encounters with Robert Mueller,” the email stated. “I would like to discuss those encounters with you.” The writer said he was investigating Mueller’s past and offered to pay Taub for “references.” Taub told the Atlantic she forwarded the email to Mueller’s office. Burkman denies offering anyone money to falsely attack Mueller.

Burkman told Hill Reporter that Jacob Wohl, a 20-year-old Trump supporter with a large Twitter following, runs Surefire Intelligence, adding that the company does a “lot of good research.” Wohl denied knowing anything about Surefire. The Krassensteins later found internet source code that clearly connected Wohl to the company.

Surefire Intelligence appeared to ask Burkman earlier this month for $4,000 for “Operation Hellfire,” according to an invoice Burkman sent to Hill Reporter. Burkman declined to comment on his relationship with Wohl when we spoke. He would only say that any invoice he did send was for “investigative” services.

Burkman said he didn’t know whether the Parsons email was a hoax, but seemed to relish the idea that it might cause journalists to fall for a trap. In that case, he said, “the only thing that would highlight were the pathetically low journalistic standards. That’s almost like—if that’s true—what Project Veritas does. You’re letting them walk into it.” He later said that anything that highlighted “the extremely low standards of the establishment media is something I would love to do.”

Regardless of the story behind the email, Burkman has achieved his longtime goal of getting more attention. He told me he had just gotten off the phone with the New Yorker‘s Jane Mayer, who tweeted that everything about the Parsons story “seems fishier than a tuna sandwich” and that the whole episode is “just a stupid hoax.”

Burkman seemed happy to be in the spotlight. “Well, hey,” he said. “We’ll take it. Maybe it will get me more followers.”