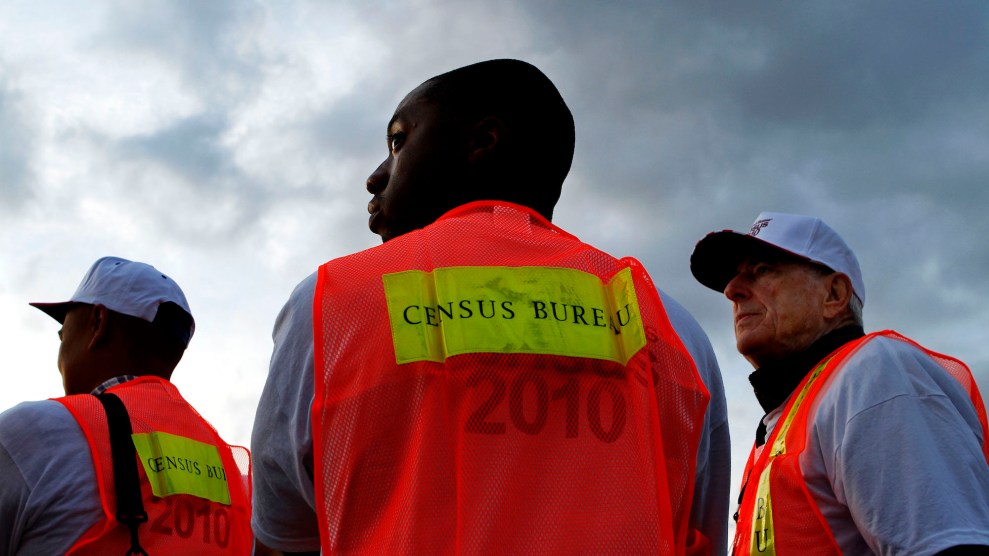 In 1986, as President Ronald Reagan prepared to sign legislation giving undocumented immigrants a path to citizenship, Robert Warren was responsible for figuring out how many immigrants would come forward. Warren, then the head of statistics at the Immigration and Naturalization Service, got it right. In almost every state, the number of undocumented immigrants who applied for legal status fell within the range he predicted.

More than three decades later, government officials and demographers still use the same method Warren and colleagues helped pioneer. They almost all agree that there are roughly 11 to 12 million undocumented immigrants in the United States. Last month, three academics from Yale and the Massachusetts Institute of Technology released a paper arguing that conventional wisdom has it all wrong. The real number of undocumented immigrants in the country, they wrote in the scientific journal PLOS One, is at least 16.7 million and probably closer to 22.1 million.

Right-wing news outlets seized on the news that there were twice as many undocumented immigrants as previously thought. Thomas Homan, the combative former head of US Immigration and Customs Enforcement, told the hosts of Fox and Friends he wasn’t sure whether to believe the study. But, he said, “I think this gives the president more ammunition to say, ‘Look, we need to fix this border.'”

The problem is that experts from across the political spectrum believe the study is deeply flawed. It’s lacking in basic due diligence, they say, and its headline-grabbing conclusion is almost definitely wrong. Steven Camarota, the director of research at the Center for Immigration Studies, which calls for steep cuts to legal immigration, wrote in a blog post that the study’s conclusions are “unsupportable.” Julia Gelatt, a senior policy analyst at the Migration Policy Institute who co-authored a critique of the paper, also published in PLOS One, says the study rests on a “completely implausible” estimate of how many undocumented immigrants arrived in the United States in the 1990s. Warren, who is now a senior visiting fellow at the Center for Migration Studies, says the Yale authors “just seem to be amazingly naive demographically.”

The feeling is mutual. Edward Kaplan, a professor of operations research at the Yale School of Management and one of the study’s authors, says of the study’s critics, “These folks don’t really understand how mathematical modeling works.” (Most of the critics who spoke to Mother Jones have Ph.D.’s in sociology or statistics.) Kaplan appears frustrated by criticism that he’s just a “business analyst,” writing in emails to Mother Jones that he’s studied Ethiopian immigration to Israel and is the 10th-most-cited scholar in applied probability, according to Google Scholar. Still, none of the report’s authors specializes in immigration. Mohammad Fazel-Zarandi, the lead author of the study, is a senior lecturer at MIT’s Sloan School of Management. Jonathan Feinstein, another professor at the Yale School of Management, studies creativity and innovation.

“I think this gives the president more ammunition to say, ‘Look, we need to fix this border,'” said former ICE chief Thomas Homan.

The conventional approach to measuring the undocumented population is simple. The US Census Bureau collects data by sending out the American Community Survey, which includes a question about where respondents were born. Demographers use that data to estimate the size of the foreign-born population and then use separate government records to estimate the number of legal immigrants in the country. The difference between the two numbers—the foreign-born population minus legal immigrants—is their rough estimate for the number of undocumented immigrants in the United States. They then boost their estimate by about 10 to 15 percent to account for the fact that undocumented immigrants tend to be undercounted in government surveys.

Kaplan says he and the other authors of the Yale study became interested in estimating the size of the undocumented population after Fazel-Zarandi expressed a desire to study border security. “We said, ‘Well wait a minute, wait a minute,'” Kaplan recalls. Why not look at the scale of undocumented immigration first? So they started building a model based on the the widely accepted estimate that there were about 3.5 million undocumented immigrants in the country in 1990.

The Department of Homeland Security estimates the undocumented population increased to 8.5 million in 2000, and the Pew Research Center estimates 8.6 million. The Yale study argues that the correct number for 2000 is at least 13.2 million and likely more than 15 million. All sides agree that the undocumented population increased by roughly 3 million between 2000 and 2014 and is now relatively stable. The real debate lies in what happened in the 1990s.

Gelatt and colleagues at the Migration Policy Institute point out that Mexican migration to the United States was very different in the 1990s than it is today. The border was far less militarized, and migrants who were caught crossing the border could usually just try again. Eventually, they’d succeed. Migration experts don’t believe they have a firm grasp on how many Mexican migrants from the 1990s actually stayed in the country, rather than repeatedly coming and going for seasonal work as “circular” migrants.

The validity of the Yale model hinges on whether it can accurately estimate how many Mexicans who came in the 1990s stayed. Gelatt believes the Yale authors made two key mistakes in doing so. First, they used DHS data on border apprehensions from the the 2000s and applied it to the 1990s. The problem with that, she says, is that it counts people who were apprehended multiple times as multiple different people. Additionally, the Yale authors did not use emigration data—the rate at which immigrants leave the United States—specific to Mexicans who crossed the border in the 1990s. That led them to overestimate the number of Mexicans who stayed in the country, she and her colleagues argue. Kaplan counters that he and his fellow authors intentionally overestimated the number of immigrants leaving the United States to account for circular migrants and “remain conservative” in their projections.

Demographers employ a wide range of methods to cross-check estimates of the foreign-born population, but the Yale study makes no mention of them. One is to compare the Mexican and US censuses, since almost all Mexicans are in either the United States or Mexico. If the Mexican census shows that a few million people are missing, there’s good reason to believe they’re in the United States. Warren writes in an email that Mexican and US census data suggest it is almost impossible that the Yale authors are right.

Jennifer Van Hook, a professor of demography at Penn State and one of the authors of the critique in PLOS One, has also looked at US birth and death records to estimate the number of Mexican immigrants in the United States. Her work suggests that the census and American Community Survey may have missed more Mexican immigrants in 2000 than initially thought, but it does not back up the Yale numbers. “People don’t hide a body,” she says. “I think that’s the bottom line. Everything we know about population growth and population change…just doesn’t fit with this 22 million estimate.”

Jeffrey Passel, a senior demographer at the Pew Research Center who helped develop the traditional counting method with Warren, says there’s no indication that the 2000 census missed 10 million people. “It would have been the worst census since 1940,” he says. “And it’s generally accepted by demographers as the best census.”

The authors of the Yale study remain convinced that government surveys are missing far more undocumented immigrants than just about everyone else believes. Kaplan is particularly concerned that proponents of the traditional model often cite an unpublished paper from 2002 as the basis for claiming that 10 percent of undocumented immigrants go uncounted. The paper was based on surveying Mexican immigrants in Los Angeles, and Van Hook says it is hard to know how accurate that data is at a national level. Her research suggests that up to 26 percent of undocumented immigrants may have been missed by the 2000 census, but that is still much lower than the 42 percent error rate implied by the Yale authors’ most conservative estimate.

Aside from his skepticism about the Los Angeles study, Kaplan’s confidence in the Yale report seems to come from a combination of gut instinct and faith in his model. “You’re talking about people who don’t want to be found and don’t want to cooperate,” he says, adding, “We’re dealing with people who understand that what they say and do with these surveys has consequences for them.” It doesn’t. The American Community Survey and census do not ask whether someone is undocumented, let alone funnel information to immigration enforcement agencies. Immigrant advocates and the Census Bureau have spent years trying to get everyone to complete the census and have run ads in Spanish to make clear that responses are confidential. Demographers think the outreach has been effective, but there is significant concern that a citizenship question being added to the 2020 census will cause more unauthorized immigrants not to respond.

If the Yale study is right, the New York and Los Angeles metropolitan areas, which each have about 1 million undocumented residents, according to Pew, could actually have 2 million undocumented immigrants apiece. When asked how local officials could be unaware of such a large population, Kaplan replies, “I mean, don’t we have things called sanctuary cities?” He explains, “It could be that you have people who are providing services, but not recording anything.” Cities have a strong incentive for the Census Bureau to count their populations accurately, since the census is the basis for federal funding and representation. Los Angeles has lobbied for increased state funding to ensure that the 2020 census provides a “complete count.”

It’s hardly surprising that many conservatives have latched on to the new data or that the study has been featured by sites frequented by white nationalists, including VDare and American Renaissance. The irony is that Kaplan believes his research backs up the progressive case for immigration reform. If, for example, there are twice as many undocumented immigrants in the country as previously thought, Kaplan says, the undocumented crime rate would be half of the current estimate—further undercutting President Donald Trump’s claim that undocumented immigrants are more likely to commit crimes than native-born citizens.

Warren sees it differently. He remembers people claiming there were as many as 12 million undocumented immigrants in the lead-up to the 1986 immigration bill. He and Passell correctly predicted that the real number was almost certainly less than 4 million, but the high estimates made it harder to pass legislation that provided a path to citizenship for those immigrants. He fears the same thing will happen now.

After the Yale study was released, Warren says he “stewed” over the weekend. “The thing that bothers me and makes me emotional is that it is so important to try to get it right, because it affects the lives of millions of people,” he says. “This issue will definitely be more difficult to resolve because of these estimates.”

He continues, “And that really bothers me. It just muddies up the waters at a time where it’s important. And they didn’t do due diligence.”