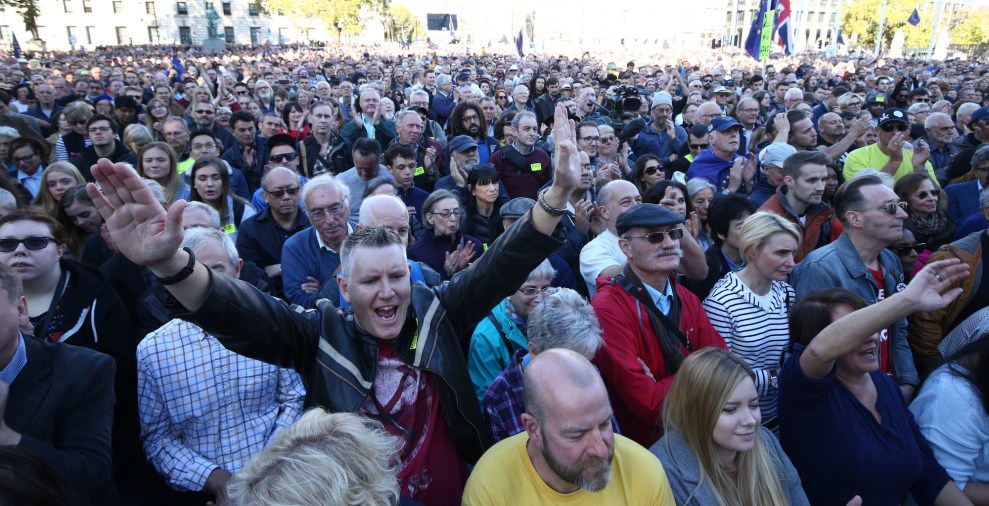 Anti-Brexit campaigners central London after the People's Vote March for the Future.Press Association via AP

The backlash to Brexit has been getting bigger and more organized.

Frustrated with political leaders’ handling of Brexit, British protesters gathered in droves on Saturday in their biggest rally yet. The People’s Vote, a collection of organizations that are against the Brexit decision, estimated that roughly 700,000 people marched in central London. Protesters called for a second referendum on the country’s exit from the European Union, which is scheduled to take place next March.

In June 2016, Britain voted narrowly to leave the European Union, 52 to 48 percent. But now that the deadline is approaching, the negotiations to hammer out the specifics of the deal have hit a wall, namely over how to handle the border between Northern Ireland and Ireland, an EU member. The stalemate has raised concern that there will be no deal when the deadline comes, which some fear would mean economic chaos.

Thousands of people are in London to take part in a protest calling for a referendum on the final #Brexit deal – says @ChrisMasonBBC https://t.co/XyPxXOrZmM pic.twitter.com/yU7G8c6hEz

Since that 2016 vote, public opinion has shifted, with a majority of voters viewing the exit deal in a negative light. The marchers called for a second referendum on Brexit, arguing that public should get another chance to weigh in since the deal under negotiation is far messier and harmful than was first promised in the 2016 vote. Their online petition reads:

We have watched the chaos unfold in Cabinet and the turmoil in negotiations with dismay and foreboding. None of us voted for a bad deal or no deal that would wreck our economy. Nor do we accept that either is inevitable. If the Brexit deal is rejected by Parliament, then we, the people of Britain, should have the democratic right to determine our own future. That is why we are demanding a People’s Vote on the final Brexit deal.

The People’s Vote promises to deliver the petition to parliament once it hits 350,000 signatures. As of Saturday afternoon, it had 30,000 to go.