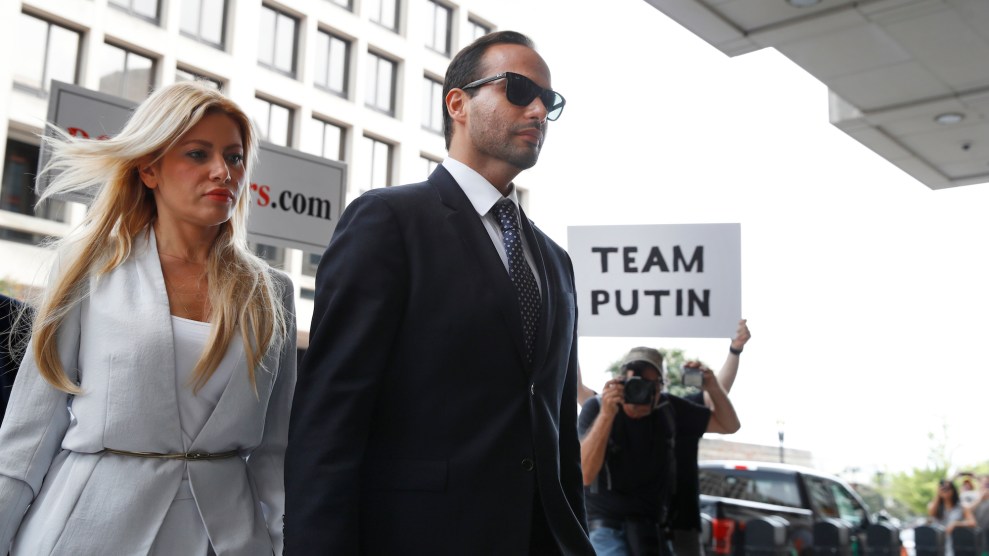 A federal judge sentenced George Papadopoulos, who served as a forign policy adviser to Donald Trump’s presidential campaign, to 14 days in prison on Friday.

The sentence makes Papadopoulos, who pleaded guilty last year to lying to FBI agents about his contacts with individuals linked to the Russian government, the first Trump associate sentenced as a result of Special Counsel Robert Mueller’s investigation into alleged Trump campaign coordination with Russia in 2016

Papadopolous has admitted that he misled FBI agents by downplaying his interactions with Joseph Mifsud, a London-based professor suspected of acting as a Russian agent and with a woman who Mifsud falsely told Papadopoulos was Russian President Vladimir Putin’s niece. According to prosecutors, Mifsud told Papadopoulos in March 2016 that the Russians possessed “dirt” on Hillary Clinton that included “thousands of emails.”

Papadopoulos tried to use his contacts with Mifsud and Russians the academic put him in touch with to set up a meeting between Trump and Vladimir Putin, an effort he pursued for months. In a memo submitted to the court earlier this month, his lawyers claimed that Trump and Attorney General Jeff Sessions, who was a top foreign policy advisor to Trump, encouraged Papadopoulos’ outreach to his Russian contacts. That claim contradicts Sessions’ assertions that he opposed the aide’s plan.

Prosecutors in Mueller’s office have said that by lying to agents, Papadopoulos “undermined investigators’ ability to challenge the professor or potentially detain or arrest him while he was still in the United States.” And they argued that Papadopoulos did not provide them with significant assistance and only told the truth after they confronted him with evidence contradicting his claims.