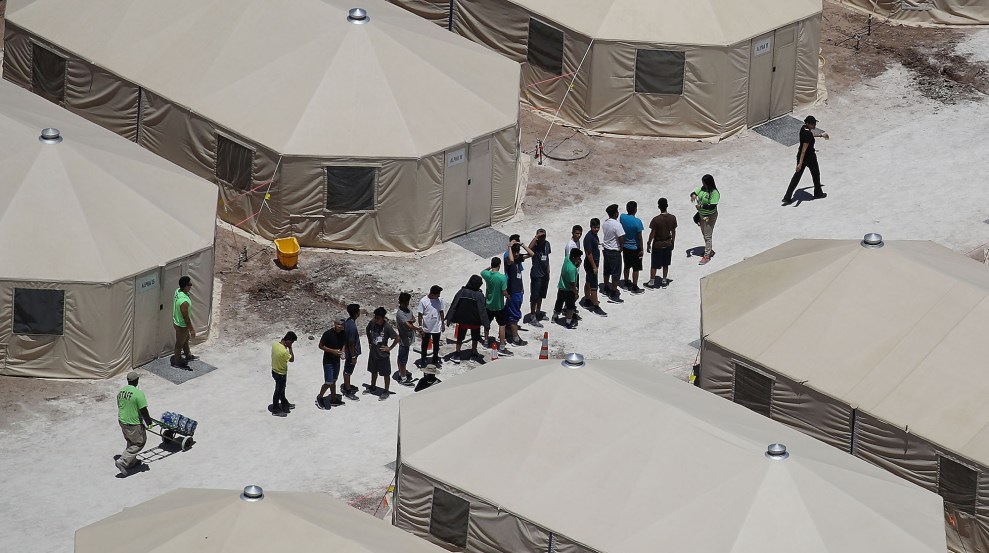 Children and workers at the tent encampment for migrant youth near El Paso, Texas, in June.Joe Raedle/Getty

The Trump administration plans to more than triple the capacity of a Texas tent camp for migrant children, a sign that the government is still struggling to accommodate young migrants even after abandoning its family separation policy.

The Department of Health and Human Services announced on Tuesday that it will expand the camp from 1,200 beds to as many as 3,800. The camp was created in June and the original contract was set to expire in July. The temporary air-conditioned tents, which primarily houses older teens, will now remain open for at least the rest of 2018. The expansion comes as young migrants are spending more time in shelters, rather than being released to parents or other sponsors.

Kenneth Wolfe, a spokesman at the HHS division responsible for child migrants, said on Tuesday there are now 12,800 children in HHS shelters, the highest number on record. The government will have the capacity to keep more than 15,000 children in shelters once the Texas expansion is complete. Mark Weber, an HHS spokesman, told the Washington Post in August that temporary facilities cost about $750 per child per day, which is roughly three times more than permanent shelters.

The administration established the tent camp at the peak of the family separation crisis. When families were separated at the border, children became classified as “unaccompanied minors,” who must be cared for by HHS’s Office of Refugee Resettlement. But ORR had limited capacity to incorporate all these new unaccompanied minors.

Following a court order to reunite families, most separated children have now been released from ORR custody and reunited with parents or other sponsors, who are usually relatives. According to a September 6 joint court filing from the American Civil Liberties Union and the Justice Department, about 400 of the roughly 2,600 separated children identified by the government are still in ORR custody, meaning that the vast majority of kids in ORR care arrived alone at the border as unaccompanied minors. Wolfe said the family separation policy President Donald Trump rescinded in June is not driving the need for additional temporary shelter space.

The New York Times reported on Wednesday that the number of migrant children in shelters has increased more than fivefold since May 2017, rising from 2,400 to 12,800 this month. But apprehensions of unaccompanied minors at the border are still far below the record highs reached in the 2014. About 4,440 unaccompanied minors were detained crossing the US-Mexico border in August, according to government data released on Wednesday. That was up from 3,920 in July but well below the apprehension numbers for May and June.

It appears that the increase in the number of kids in ORR custody is not due only to an increase in unaccompanied minors crossing the border or the lingering effects of the family separation policy. Instead, it has likely occurred because children are not being released as quickly. Monthly releases of migrant children have dropped by about two-thirds since last year, according to government data obtained by the Times. The American Prospect reported last week that the rate at which children are being released from ORR shelters is about a fourth of what it was under the Obama administration.

The average number of days children spent in ORR custody dropped from 72 in the 2011 fiscal year to 34 in 2015, according to the Government Accountability Office. The GAO attributed the shift to a streamlined process for placing children with sponsors, who are usually parents or other relatives. That increased to 51 days* in the last fiscal year, according to HHS, and is now 59 days.

The increase follows efforts by the Trump administration that appear to have made parents more afraid to come forward as the sponsors of their unaccompanied children. McClatchy reported last year that the Trump administration was arresting parents who paid to have their children brought to the United States as unaccompanied minors. Steven Wagner, the HHS official who oversees ORR, told Congress in April that 41 percent of unaccompanied minors were being released to parents. That is down from 49 percent in the 2017 fiscal year and 60 percent four years ago.

In April, ORR entered an agreement that provides Immigration and Customs Enforcement with information on unaccompanied minors’ potential sponsors, who have often been undocumented. Under the agreement, ORR sends ICE the fingerprints of parents who are trying to sponsor unaccompanied children, along with the fingerprints of any adults who live with them. ICE then checks their immigration and possible criminal histories, even though ORR already conducts criminal background checks on potential sponsors.

Wagner said in May, “If somebody is unwilling to claim their child from custody because they’re concerned about their own immigration status, I think that de facto calls into question whether they’re an adequate sponsor and whether we should be releasing the child to that person.”

The Women’s Refugee Commission and National Immigrant Justice Center predicted the effects of the agreement this summer, writing that it would “accelerate not only the decline in releases to parents, but also releases overall, leading to longer stays in ORR custody.” The partnership, it argued, “will undermine family reunification, the fundamental principle of child welfare law, by turning safe placement screening into a mechanism for immigration enforcement.”

Update: HHS previously put this figure at 41 days, but on Thursday confirmed that it was 51 days.