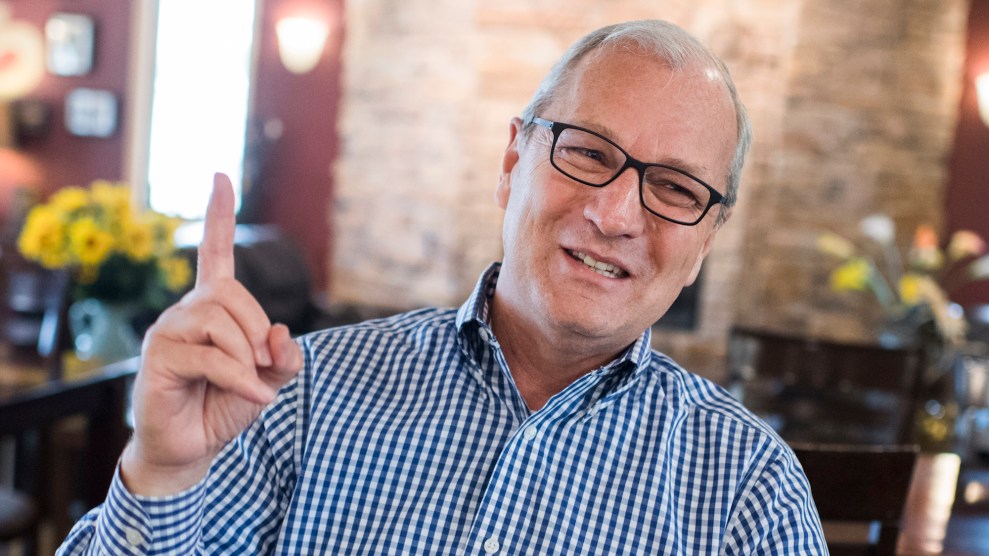 Three days after calling the sexual assault claim against Supreme Court nominee Brett Kavanaugh “absurd,” North Dakota Rep. Kevin Cramer returned to the issue Monday night and questioned whether an attempted rape by a 17-year-old should disqualify Kavanaugh, “even if it’s all true.”

Cramer, a Republican candidate for Senate challenging Sen. Heidi Heitkamp in a close race, told a local TV news station in North Dakota that if the allegations by Dr. Christine Blasey Ford were true, “it certainly means that he did something really bad 36 years ago.”

“But does it disqualify him from the Supreme Court?” he added.

Cramer also doubled down on a comment he previously made to a North Dakota radio show, in which he appeared to dismissing the claim against Kavanaugh because it involved teenagers, alcohol, and only attempted, not completed, rape:

As Senate Republicans were negotiating with Kavanaugh’s accuser, Dr. Christine Blasey Ford, about the terms of her planned testimony before the Senate Judiciary Committee, Cramer appeared on a North Dakota talk-radio show and criticized Ford for asking to testify after Kavanaugh, saying she was disregarding “due process.” When asked about the relationship between Ford’s claim and Anita Hill’s 1991 sexual harassment accusation against Justice Clarence Thomas, Cramer said the allegation against Kavanaugh was “even more absurd.”

“These are teenagers who evidently were drunk, according to her own statement,” Cramer said. “They were drunk. Nothing evidently happened in it all, even by her own accusation. Again, it was supposedly an attempt or something that never went anywhere.”

(Ford’s statement to the Washington Post was that she had one beer but Kavanaugh was “stumbling drunk.”)

“There was no type of intercourse or anything like that,” Cramer explained during Monday’s TV interview. “That was my point, that nothing happened in terms of a sexual event—beyond, obviously, the attack.” He also questioned the second allegation brought forward by Deborah Ramirez, who attended Yale University with Kavanaugh and claimed that he exposed himself to her at party. Cramer called Ramirez’s allegation “far more suspicious than the first one.”

Heitcamp issued a statement in response to Cramer’s Friday interview: “Congressman Cramer’s comments are disturbing, and they don’t reflect the values of North Dakota.”

Even before the Kavanaugh allegations, Cramer’s record on respecting women wasn’t stellar. As I already reported:

It’s far from the first time Cramer, a pro-life Republican who has served in the House of Representatives since 2012, has demeaned women. This week, when Heitkamp accused him of stealing credit for overturning a 40-year ban on exporting crude oil, he called her response a “hissy fit,” NBC reported. Last year, he described women who wore white in honor of suffragettes to one of President Donald Trump’s first addresses as being “poorly dressed” and looking “silly,” according to NPR. And over the summer, he explained Trump’s apparent friendliness toward Heitkamp—a conservative Democrat who has voted with Trump’s position more than 55 percent of the time—by claiming Trump wouldn’t want to be aggressive toward a woman. “She’s a, you know, a female,” he told the Washington Post. “He doesn’t want to be that aggressive, maybe.”