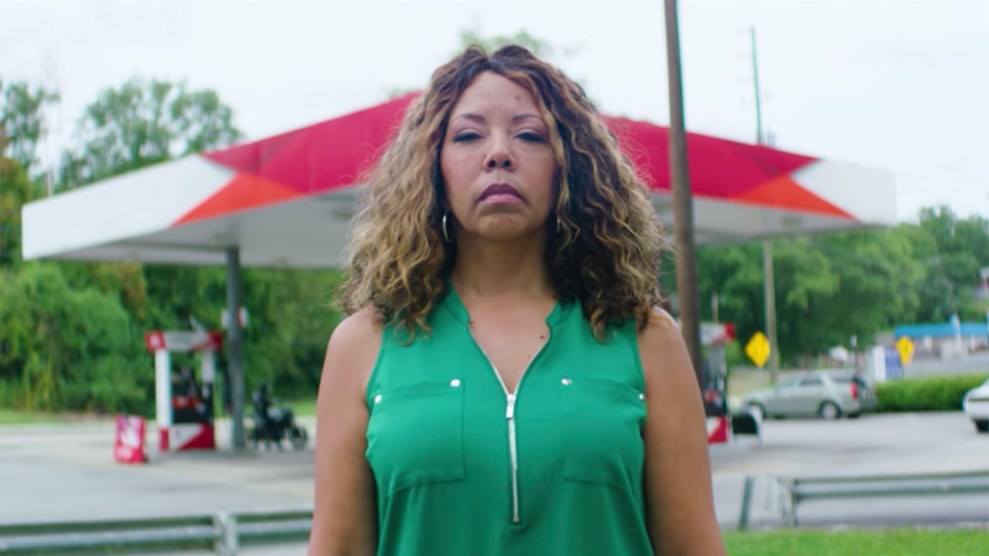 Democrat Lucy McBath, once considered a long shot in Georgia’s traditionally deep-red 6th Congressional District, is in full media blitz. A black woman with a liberal platform focused on gun safety, she’s on the opposite end of the spectrum as incumbent Karen Handel, who has been endorsed by the National Rifle Association and is staunchly anti-choice. But, little by little, the race seems to be tightening—McBath came within just two points of Handel in a recent poll, albeit one from McBath’s campaign. Now, the challenger is working to close that gap, and with a new memoir from McBath and moving ads on both sides, the race is boiling down to a war of personal narratives.

McBath was first thrust on the national stage after she lost her son to gun violence and became a Mother of the Movement, campaigning for Hillary Clinton in 2016. Now in her first run for office, her message has been simple: She’s survived life’s most painful losses, which means she can relate to everyday voters and, come Election Day, win. But her campaign is also making a risky bet that devout faith makes McBath the perfect candidate to pull off an upset. Both elements have been clear in recent weeks as, in quick succession, she has released a deeply personal new ad and a memoir to build on her reputation as a bereaved mother-turned-gun safety advocate.

Titled “Jordan,” the ad dropped the second week of September and introduces McBath’s widely known national story to her constituents: In 2012, her 17-year-old son, Jordan Davis, was shot and killed at a gas station by a white man who accused him and his friends of playing music too loudly. That man, Michael Dunn, tried to use Florida’s controversial stand-your-ground law in his defense, but lost and was sentenced to life in prison. Jordan’s death and the trial that followed pushed McBath into the spotlight, which she’s since used to become a leading gun safety advocate.

“The work was calling me,” she told me in a profile for Mother Jones shortly after she announced her run for office. “I wanted to be challenging our legislators and our civil leaders.”

The ad opens with surveillance footage from the Jacksonville gas station where Dunn murdered Jordan before pivoting into McBath’s ordinary life before his death, when she was a churchgoing Delta flight attendant coordinating her shifts to be home with her son. Throughout the ad, there are shots of McBath’s typical life in 2018—walking her dog, smiling with a neighbor, praying in the pews of her local church—meant to drive home to voters that despite the extraordinary circumstances that first thrust her into the national spotlight of gun reform, she’s still one of them. “I still continue to mother [Jordan] by making sure I preserve the lives of other children,” she says in the ad.

I never planned to run for office. After my son Jordan was shot and killed, my life completely changed. This is my story — please share it far and wide, and join me on this journey.

The ad was released the same week as McBath’s book, Standing Our Ground: The Triumph of Faith Over Gun Violence. Written with author Rosemarie Robotham, it’s a memoir that’s striking in its intimate details. There was her childhood in the suburbs of Chicago with her parents, both civil rights activists; the several miscarriages that preceded Jordan’s birth in 1995 that was, in her estimation, a “miracle”; and the two bouts of cancer she endured throughout Jordan’s childhood.

“I have not spent all my time and my life trying to move around the pathway to become this candidate,” McBath told me the day after the book’s release. “But what I’m hoping is that through my candidacy, the experiences I’ve had in my life make me relatable to people in my district in [terms of] the things they’re concerned about: women’s health care, education, gun violence, tax reform, the state of the economy.”

It’s probably inevitable the book is so open and, at times, devastating. McBath tells me she actually began writing it in 2014. “I journaled during the court proceedings because we weren’t allowed to talk, show any emotion, make any expression. So it was very difficult just to sit there,” McBath says.

While the book doesn’t push a platform all that different from fellow progressive Georgians who have tried to upend conventional political wisdom in the state—people like gubernatorial candidate Stacey Abrams or Jon Ossoff, the Democrat who ran in the 2017 special election that eventually put Handel in office—it is telling in the way it tries to bridge the partisan divide. While Republicans still promise to repeal Obamacare, McBath wants to expand it. The NRA is suing states like Florida that plan to raise the minimum age limit to purchase a gun to 21, while McBath wants to make such an age limit federal law. These policy prescriptions, though, are so wedded to her faith and personal tragedy that it’s clear she thinks these are the keys to reaching across the aisle. McBath argues in her book, for instance, that the NRA has effectively controlled the faith community’s discussion about guns for decades, even though that message contradicts Christian values. “If God is your protector,” she writes, “how armed do you need to be to feel safe?”

And as she tells me, “[My life] gives me far more credibility to be able to speak very candidly about these kinds of issues people in my district are concerned about. And I can speak about that in Washington.”

The book and ad are timed to play to distinct audiences. There’s the national audience, who may already know McBath’s work as an advocate and will want to delve deeper into her personal story (which was touched on in two well–received documentaries in the past few years). And then there are voters in Georgia’s 6th District, who will see the ad played on TV and social media from now until Election Day.

Then there’s another audience: McBath’s opponent. Handel has mostly been busy taking aim at McBath’s ties to Clinton, as well as to other national Democrats. “The same woman that so kindly referred to us all as ‘deplorables’ is now generously funding my opponent’s campaign – even hosting a top-secret fundraiser for her in Manhattan,” Handel wrote in one fundraising email to supporters. Another reads, “Friend, if we don’t stand up now, these outside influencers will NEVER stop meddling in our elections.”

But Handel also seems to be making a calculated effort to match McBath in getting deeply personal. (Handel’s office did not respond to a request for comment from Mother Jones.) The congresswoman’s story is relatively well known to Georgia voters by now. After losing a race for a US Senate seat in 2004, she became Georgia’s secretary of state in 2006, then launched an unsuccessful bid for governor in 2010. After that loss, she took a job as senior vice president of public policy at Susan G. Komen for the Cure, a breast cancer charity, where she reportedly led a widely criticized effort to cut ties with Planned Parenthood. In 2017, she narrowly won an incredibly high-profile special election, during which she pushed for stringent voter suppression laws and bolstered her reputation as a tough-talking conservative. That race, though, was so close—and also the most expensive congressional race in history. This year, Handel is not leaving anything to chance, and seems to be trying a new tactic.

Her first ad of the campaign, released last month, marked a clear departure for the candidate. As she looks directly into the camera, she shares how she left a troubled home as a teen and, “but for the grace of God,” escaped sex traffickers in Atlanta. She says that experience drives her work to combat trafficking in Congress.

While Handel tries to meet McBath on the personal side, the next few weeks might see McBath meet Handel on the offensive. McBath tells me her message is now about Handel: “[It’s] showing how diametrically opposed we are in so many ways…My vision is far more inclusive and far more diverse, and my campaign to [win] in Washington is based upon the fact that I’ve lived the very reality of the things they’re concerned about, versus Handel, a career politician, [who] has run over and over and over again.”