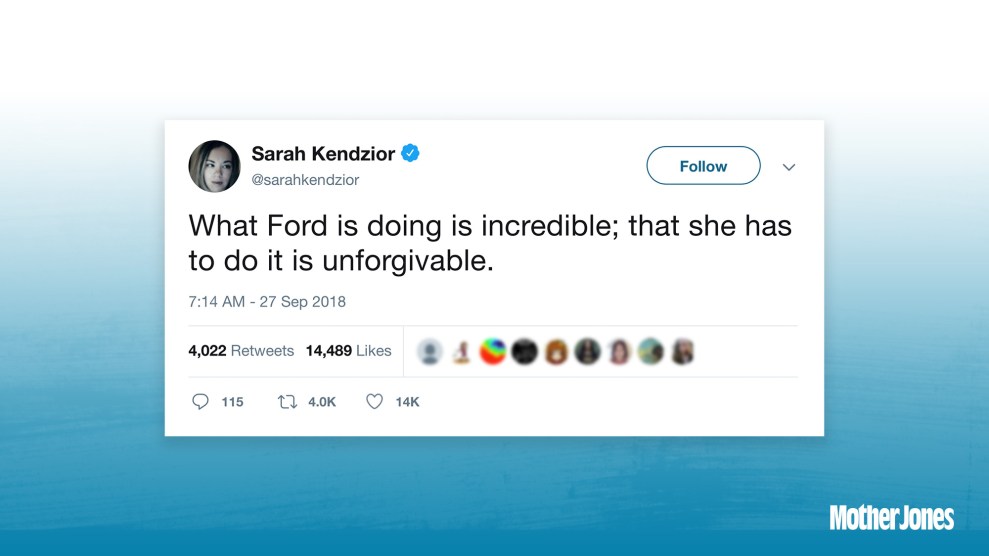 Christine Blasey Ford’s appearance before the Senate Judiciary Committee on Thursday sparked a range of supportive reactions from all corners of the internet. Survivors of sexual abuse and allies expressed solidarity with Ford, and even critics eager to see another conservative jurist elevated to the Supreme Court acknowledged the power of her testimony and the political danger it may pose for Republicans.

Many observers on social media and cable TV simply acknowledged the emotional devastation of watching Ford tearfully recall details of her alleged assault at the hands of Supreme Court nominee Brett Kavanaugh.

Just ran into @TaranaBurke, founder of the #metoo movement, coming out of the hearing room. She had tears flowing down her cheeks.

I walked into my building’s gym and it was full of women.

Halfway through my run I stopped and fell to my knees crying.

For all of us. I wasn’t alone. We comforted each other.

I just cannot cry anymore. I am too angry.

Some journalists drew attention to the way Ford interacted with Republican senators, including Judiciary Committee Chairman Chuck Grassley (R-Iowa), and noted how it reflects the way women are socialized to be “collegial.”

"Does that work for you as well? I'm used to being collegial."

All of this is devastating.

Other commentators fixated on the clinical terms Ford used to describe her assault and the trauma and anxiety she has experienced in the years since.

We still don't know a lot about Christine Blasey Ford. But one thing we've learned is that she has studied trauma as an adult. Incredible that she's being asked by Mitchell about her own trauma, and she's clearly applying what she's learned in her own research to try to explain.

Christine Blasey Ford testifies on what she remembers most vividly from the alleged assault: "Indelible in the hippocampus is the laughter. The uproarious laughter between the two and their having fun at my expense… I was, you know, underneath one of them while the two laughed" pic.twitter.com/2HZtC27RhU

“etiology of anxiety and PTSD is multifactorial”

“indelible in the hippocampus"

Dr. Ford is essentially offering expert witness testimony on the effects of her own assault

I was just talking with a friend the other day who was assaulted & doesn’t remember the aftermath, getting home etc. To me, that makes Ford’s testimony more instead of less credible — it’s a normal symptom of trauma.

What Ford is doing is incredible; that she has to do it is unforgivable.

Dr. Ford, I am in awe of your bravery.

What's breaking my heart right now is Ford's desperate and quite earnest desire to please.

All of this just feels so wrong…The questioning, the Democratic senators' statements. Just let her go back to her life. Honestly what the heck more do people want of her? If you don't believe her, fine, but putting her through this feels just perverse and sadistic.

Ford’s testimony even struck a chord with Fox News hosts like Chris Wallace, who called the hearing a “disaster” for Republicans. “Nobody could listen to her deliver those words and talk about the assault and the impact it has had on her life and not have your heart go out to her,” he said. He added, “She obviously was traumatized by an event.”

Fox News' Chris Wallace at the first break in Dr. Christine Blasey Ford's testimony: Her testimony is "extremely emotional, extremely raw, and extremely credible," while cross-examination format "is a disaster for the Republicans." pic.twitter.com/fHy0rcwAV2

Steve Schmidt, who managed John McCain’s 2008 presidential campaign, called the entire event a “political disaster” for Republicans and criticized the strategy of having Arizona sex crimes prosecutor Rachel Mitchell question Ford in lieu of the all-male Republican committee membership doing it themselves.

Every GOP campaign strategist and Hill staffer wishes they had the button to open the trap door under Rachel Mitchell’s chair. What a total and complete Political disaster for Republicans.

The GOP members are putting on a clinic for political cowardice. Will not one of them, while watching a hectoring and minimally prepared Rachel Mitchell, harass Dr. Ford, step up and take back their time and denounce this kangaroo court ?

Ford’s account of the assault was disputed by some right-wing commentators. On NRATV, the channel run by the National Rifle Association, host Grant Stinchfield said Ford was being used as a “pawn” by “people who hate the Constitution and Judge Kavanaugh.”

Ford has described receiving death threats and hate mail since her name became public weeks ago. “I am here today not because I want to be,” she said during her opening statement. “I am terrified.”