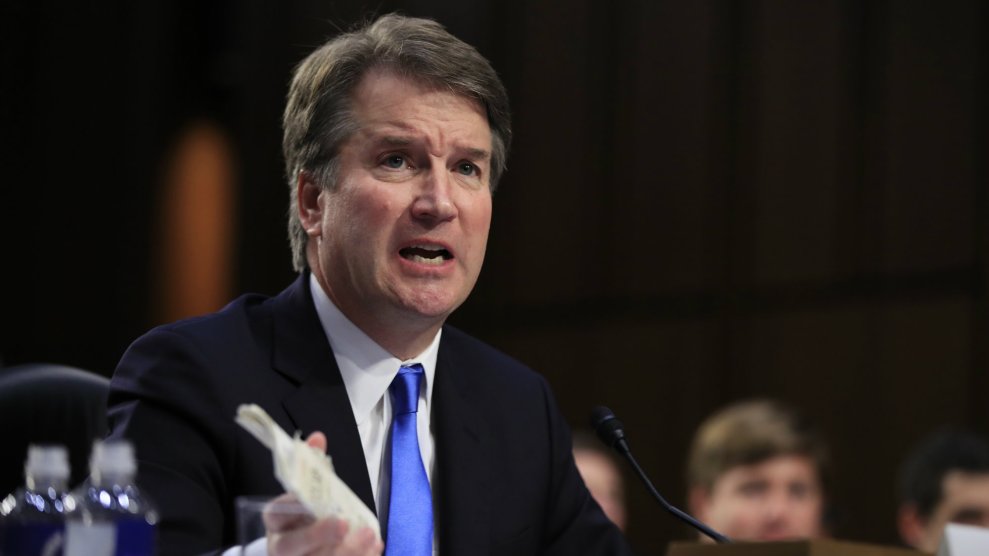 While Kavanaugh was associate counsel in Bush’s White House from 2001 to 2003, Republican Senate aide Manny Miranda helped leak thousands of emails from Democratic members on the Judiciary Committee, including strategy memos outlining how Democrats planned to question Bush’s judicial nominees. (Miranda’s case was referred to the Justice Department, which did not charge him with a crime.)

The nominee appeared confused when Leahy flashed a copy of an email Kavanaugh had received from Miranda regarding committee Democrats’ inquiries into Priscilla Owen, whose nomination to the Fifth Circuit Court of Appeals was filibustered by Democrats for four years before she was eventually confirmed.

The email included a draft copy of a memo circulated among Democratic senators that Leahy said was later leaked to Fox News.

“Is that what this email is?” Kavanaugh asked. “Can I take a minute to read it?”

OOF — Leahy presses Kavanaugh about whether he found it "at all unusual to receive a draft letter from Democratic senators to each other before any mention of it was made public?"

In other words, Leahy is accusing Kavanaugh of having obviously stolen files in his inbox. pic.twitter.com/wYgCtlkphD

Kavanaugh denied knowledge of anything unusual about the email’s origin, but Leahy persisted asking him what he knew about the document’s origins.

“You had the full text of my letter in your inbox before anything had been said about it publicly,” the senator told Kavanaugh. “Did you find it all unusual to receive a draft letter from Democratic senators to each other before any mention of it was made public?”

During his 2006 confirmation hearings to be a judge on the DC Circuit Court of Appeals, Kavanaugh said he was unaware of Manny’s actions. “I did not know about any memos from the Democratic side,” he said. “I did not suspect that.”

“I guess I’m not sure about your premise,” Kavanaugh replied.

“Were you at all concerned about where Mr. Miranda got some of the material he was showing you?” Leahy continued.

“I don’t recall that,” Kavanaugh said.

LEAHY: "I'm concerned because there is evidence that Mr. Miranda provided you with materials that were stolen from me. And that would contradict your prior testimony… there is no reason [those emails] can't be made public." pic.twitter.com/lqMkJun42i

He ultimately conceded that it was possible a Republican staffer may have sent him material he improperly obtained.

“I’m not going to rule anything out,” he said.