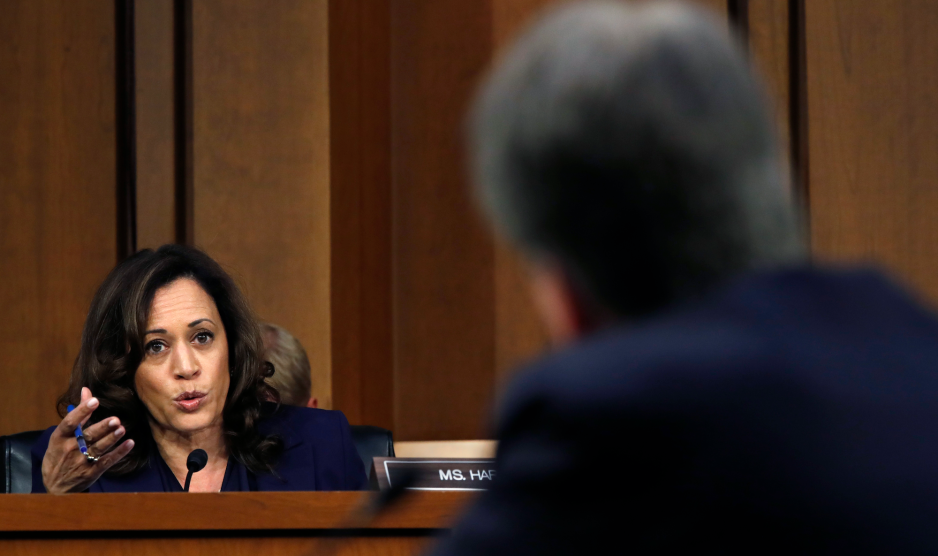 Supreme Court nominee Brett Kavanaugh on Wednesday was either unable or unwilling to answer repeated questions from Sen. Kamala Harris (D-Calif) about whether he had ever discussed the Mueller probe with anyone from Kasowitz, Benson, and Torres—the law firm of President Donald Trump’s personal attorney Marc Kasowitz.

The tense exchange surrounding the question “Have you ever discussed Special Counsel Mueller or his investigation with anyone?” came at the tail end of nearly 12 hours of exchanges between Kavanaugh and members of the Senate Judiciary Committee on the second day of his confirmation hearing.

“I’m not sure I know everyone who works at that law firm,” Kavanaugh said at one point during his response to Harris. He then asked if she was referring to a specific person. “I would like to know the person you’re thinking of.”

“I think you’re thinking of someone and you don’t want to tell us,” the California senator responded, repeatedly declining to elaborate on her line of questioning.

The back-and-forth was briefly interrupted with Sen. Mike Lee (R-Utah), who pointed out the abundance of law firms in Washington.

CSPAN has posted the entire nearly 8-minute exchange between Kamala Harris and Kavanaugh on the Mueller probe. It is worth your time. pic.twitter.com/ezJVEuDeUK

Some legal experts noted the potential significance of Kavanaugh’s seeming inability to provide a direct answer to Harris.

This @KamalaHarris cross-X is so important because if Judge Kavanaugh did in fact discuss the Mueller probe with Trump’s personal attorney’s firm, he has NO CHOICE but to recuse from all matters related to that probe. And his claim to have forgotten could be confirmation PERJURY https://t.co/6x6GbP3QYc

Others seemed more skeptical about Harris’ line of questioning:

I would put this slightly differently: Either Kamala Harris has something significant to reveal about Kavanaugh’s having improper discussions about the Mueller probe with someone from the Kasowitz firm or she engaged in a shocking piece of demagoguery yesterday. https://t.co/x5unjlejdL

Listen to senior reporter Stephanie Mencimer describe the raucous opening days of the Kavanaugh hearings on the latest episode of the Mother Jones Podcast: