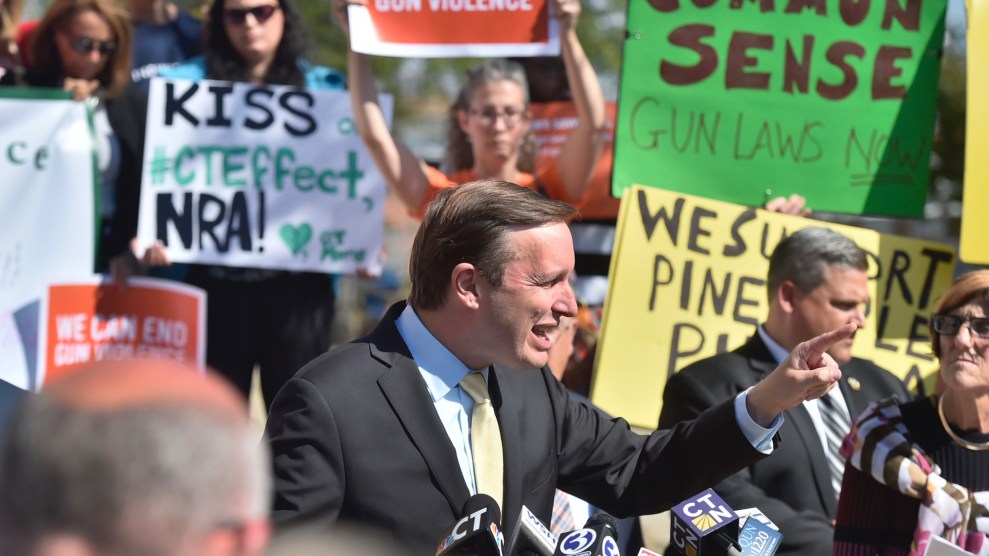 The February school shooting in Parkland, Florida, ignited a nationwide outcry for gun reform, and the gun violence prevention movement and its congressional allies have sought to channel that fervor into electing candidates who will support their cause. Next Friday, the major national gun safety groups are joining with Democratic allies for the first time in an attempt to raise money for candidates who are trying to replace GOP incumbents who stand in their way.

The fundraising effort, dubbed the “NR8,” will take place October 5, a date chosen for its proximity to the one-year anniversary of the deadliest mass shooting in US history—the Las Vegas massacre, which left 58 people dead. The initiative aims to raise $1 million in 24 hours for eight Democratic House and Senate candidates challenging Republican incumbents who have routinely sided with the National Rifle Association during their time in Congress.

The project is the brainchild of Sen. Chris Murphy (D-Conn.), the Senate’s most outspoken gun safety advocate, who is determined to turn gun control into a winning issue on Capitol Hill. In the aftermath of the Parkland massacre, Murphy convened his Democratic congressional colleagues and the national gun safety groups—many of which are involved in next week’s fundraiser—to discuss how to translate demands for gun safety into a midterms strategy.

At the time, Murphy had envisioned all the national organizations—each of which has amassed thousands of new volunteers and millions in donations following the Parkland shooting—working together to replace lawmakers who championed gun rights. Some of them have collaborated on voter registration and polling this cycle, but this fundraiser marks the first time they’ve all worked together in a concerted electoral effort. Robin Lloyd, director of governmental affairs at Giffords, a gun safety group, is impressed with how Murphy is “leveraging all of the groups,” noting that each of them champion initiatives that speak to particular voting blocs. The effect? A broadening of “the base of support for gun safety policies and gun safety candidates.”

A marquee list of Democrats have agreed to participate, including Hillary Clinton and 2020 presidential hopefuls like Sens. Cory Booker of New Jersey, Kamala Harris of California, and Elizabeth Warren of Massachusetts. There are others who, like Murphy, have championed gun safety in the aftermath of a mass shooting in their districts, like Rep. Ted Deutch, who represents Parkland, and Murphy’s Connecticut colleague, Sen. Richard Blumenthal. Everytown for Gun Safety, Moms Demand Action for Gun Sense in America, Giffords, the Brady Campaign to End Gun Violence, and the Pride Fund to End Gun Violence are all participating as well. They have all agreed to share an ActBlue donation link with their social media followers and email lists. When the fundraiser is over, the list of “NR8” donors will belong to each of the eight candidates, so they can turn to those same gun control-minded donors later on.

I’ve spoken with Murphy several times over the past few months about how he and his allies in the gun violence prevention movement planned to channel the “Parkland effect” into the midterms, and he alluded to a plan like this earlier this summer. We touched base yesterday about how this fundraiser came together, what it takes to turn gun safety into a winning issue, and what we might expect from the next Congress should Murphy and his allies succeed in their electoral efforts.

Mother Jones: When we spoke in July, you told me you wanted to see the major gun violence prevention groups throw their weight behind a half-dozen races in which gun safety could be a decisive issue. Is this the effort you had envisioned?

Chris Murphy: I was previewing my idea for you! There’s been a fair criticism of the anti-gun violence movement that there are a lot of increasingly powerful groups that are often doing their own thing. And this is the first time all the anti-gun violence groups and all their allies in Congress have gotten together behind one political project: electing eight Democrats that are going to take back control of Congress from the NRA. Frankly, it wasn’t that hard to convince everybody to do this. It wasn’t just me; it was a bunch of my other colleagues in Congress who wanted to take the lead. Everybody was really enthusiastic to step up and show our movement is mature enough, that we can all get together and use our collective reach on email and social media to raise a bunch of money for a really important race.

MJ: This effort really aligns the gun control groups with Democrats. But this cycle, we’ve seen some groups endorse and donate money to Republicans who are good on this issue, but maybe not as good as the Democrat running against them. Does that run counter to the aspirations you have for this fundraiser and how the movement could work as a whole?

CM: I have strong feelings about this. I think the gun groups are completely right to be supporting some Republicans who have been helpful on this issue. Our goal should not be to pass a background check bill with only Democrats. We should be trying to convince Republicans to join us. The problem is, there’s a very, very small number of Republicans right now who are willing to join us. And this campaign is about targeting Republicans who are working hard against us and replacing them in Congress with Democrats who will work with us. I’m not necessarily in the business of going out and arguing for Republicans to get elected, because I also care about other issues besides guns. I think anti-gun violence groups are really smart to make it clear they’re not arms of the Democratic Party. They are going to support Republicans who support their issues.

Ultimately, we need Republicans to vote with us on background checks in 2019, and there is both a carrot and stick approach to trying to make that happen. The gun groups are going to help certain Republicans get reelected that they know are going to vote with us on background checks. But this fundraising effort is going to make it clear to Republicans that if you vote against the 97 percent of your constituents who want background checks, there’s a pretty powerful, mature political movement that is going to work to get you out of office. It’s important for us to translate to Republicans that the anti-gun violence movement is much more powerful in 2018 than it was in 2016 or 2014 or 2012.

MJ: You’ve gotten some big names to sign onto this effort, like Hillary Clinton. Did you ask President Barack Obama to get involved as well?

CM: That’s a good question. I did some of the outreach, not all of it, and I don’t know whether he’s engaging in online fundraising. I think he’s done some individual fundraising events, but I don’t think he’s engaging in online fundraising, so this might not be the right project for him. But Secretary Clinton has been a little bit more overtly political this cycle. She called me the day after the filibuster in 2016. I’ve been in pretty regular contact with her about the importance of this issue, and I’m glad she’s showing up.

MJ: Is there anything else you’d like to see your colleagues or the gun safety groups do between now and Election Day?

CM: All the groups have their own electoral plans, and they’re spending a lot of money both on TV and on the ground. I’ve been fully briefed on their plans, and they have a lot of exciting races they are going to be investing in. So, I don’t really see anything new that has to happen. I’d like to see candidates recognize this is a motivating issue for swing voters, and I think candidates are seeing that in their polls. But my hope is that you’ll see candidates running very loudly on the issue of background checks, not just because they believe in it, but because they think it’s going to get them votes.

MJ: You’ve mentioned background checks a few times now. Of all the items on the gun safety “wish list”—like an assault weapons ban and red flag laws that keep guns out of the hands of those who pose a risk to themselves or others—what will be your priority in the next session of Congress, should the midterms go as the movement hopes?

CM: Background checks have the benefit of being both the most politically popular, the legislation, and the most impactful, as a matter of policy. It saves the most lives. Obviously I have a longer list, but background checks still remain the holy grail.

This interview has been edited for both length and clarity.

This post has been updated to reflect that the Coalition to Stop Gun Violence is not involved in this effort.