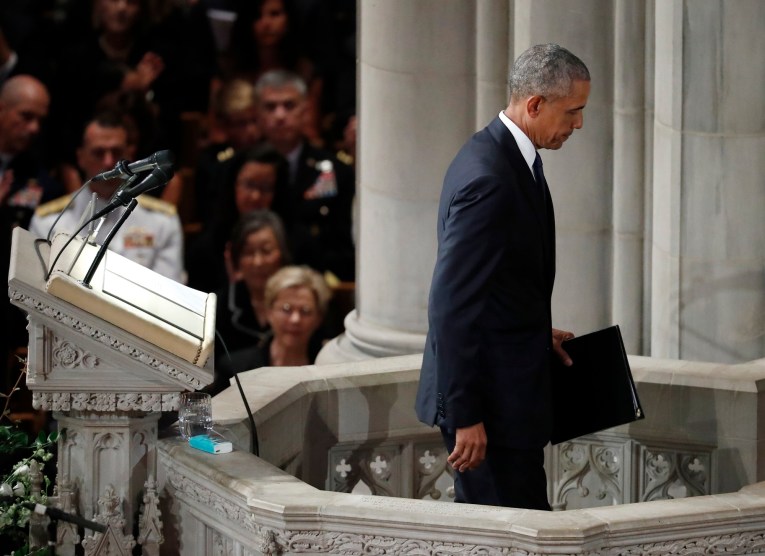 The host of Fox & Friends were outraged on Sunday over what they perceived as indirect criticism of President Donald Trump at John McCain’s funeral on Saturday. Co-host Rachel Campos-Duffy said she was sure that a lot of “elites” were “gleeful at some of the shots taken at President Trump.” The hosts appeared to concede that praising decency and criticizing despotism now means criticizing the President. The speakers at the funeral never mentioned Trump’s name.

Fox News correspondent Garrett Tenney highlighted three examples of what he said many people interpreted as “subtle and not so subtle shots at the current commander in chief:” Barack Obama lamenting “mean and petty” discourse, George W. Bush saying McCain “detested the abuse of power” and “could not abide bigots and swaggering despots,” and Meghan McCain, the late Senator’s daughter, saying America was always great.

Campos-Duffy went on to highlight a fourth criticism: Sen. Jeff Flake (R-Ariz.) tweeting a photo of Bush, Obama, and Clinton at the funeral captioned “Decency Wins.” Fellow host Ed Henry said a funeral was an odd place to talk about “winners and losers.”

I re-read all the speeches from McCain’s funeral. Nobody attacked Trump. They *praised* honor, decency, character, bipartisanship, and placing country over party. What does it say about Trump that so many people interpreted this as an assault on him personally?

Co-host Pete Hegseth noted that, “I appreciate a grieving daughter, a grieving family. All of that is legitimate.” But, he added, shaming people for supporting Trump by highlighting McCain’s “goodness” wasn’t going to change anyone’s views. John McCain was a “good man” he said, but “we can also be in a different chapter where different tools and different leaders can take the mantle and carry forward what America represents.”

Henry also criticized Obama for talking too much about himself during his eulogy. “Shocker,” Hegseth interjected. “It’s about the man who passed away,” Henry added. “It’s about his awesome life and legacy, not about yours.” Last month, Trump reacted to Aretha Franklin’s death by noting that she “worked for me on numerous occasions.”

Read the full sections highlighted by Fox and Friends below.

George W. Bush: He respected the dignity inherent in every life — a dignity that does not stop at borders and cannot be erased by dictators. Perhaps above all, John detested the abuse of power. He could not abide bigots and swaggering despots. There was something deep inside him that made him stand up for the little guy — to speak for forgotten people in forgotten places.

One friend from his Naval Academy days recalled how John — while a lowly plebe — reacted to seeing an upperclassman verbally abuse a steward. Against all tradition, he told the jerk to pick on someone his own size. It was a familiar refrain during his six decades of service.