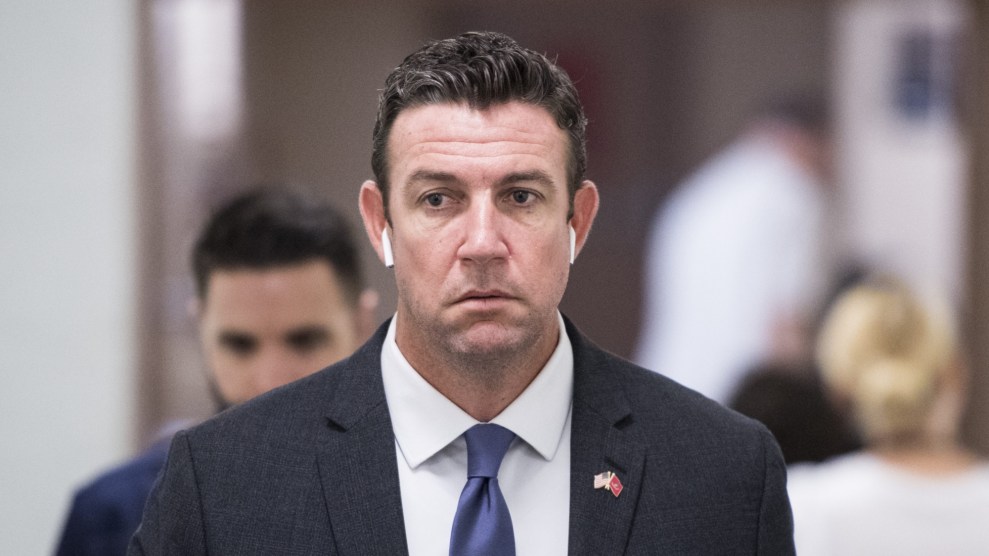 On Wednesday, a spokesman for California Rep. Duncan Hunter told the Los Angeles Times that Hunter had never suggested his opponent, Palestinian Mexican American Ammar Campa-Najjar, is a Muslim (Campa-Najjar is a Christian). But that same day, Hunter released an ad accusing Campa-Najjar of receiving campaign support from the Muslim Brotherhood, trying to infiltrate the government, and hiding a family member’s “ties to terrorism.”

“[Hunter] never made the claim that his opponent is Muslim,” spokesman Mike Harrison told the Los Angeles Times. “That’s for his opponent to answer.” Harrison was trying to clarify what the candidate had said about his opponent’s religion during a Monday speech to a Republican women’s group in San Diego, in which Hunter alluded to many of the same claims found in his ad.

The 30-second ad says Campa-Najjar is attempting to “infiltrate Congress,” highlighting his grandfather’s involvement in the terrorist attack at the Munich Olympics in 1972 (the organization that committed the attack was secular). Campa-Najjar has denounced the actions of his grandfather, who died several years before Campa-Najjar’s birth.

“He’s used three different names to hide his ties to terrorism,” the narrator says, referring to Campa-Najjar reportedly changing his birth name from Ammar Yasser Najjar in June. The ad also features footage from a segment on the One America News Network, a conservative cable news channel based in San Diego, where Hunter’s district is located. In the segment, a pundit says Campa-Najjar is “supported by [the Council on American-Islamic Relations] and the Muslim Brotherhood. This is a well-orchestrated plan.”

In response to Hunter’s comments in his speech Monday, Campa-Najjar campaign spokesman Nick Singer told the Los Angeles Times, “These are the desperate ravings of a congressman who believes he is above the law and has lost his grip on reality.” Campa-Najjar tweeted about the ad Friday—and accused Hunter of violating federal guidelines on political ads. The ad ends with a picture of Hunter, a former Marine, in a military uniform. The Washington Post‘s Dave Weigel noted on Twitter the clip didn’t include the necessary disclaimer for ads featuring candidates in military garb.

On top of being criminally indicted for stealing $250,000 in campaign funds — Hunter just violated FCC law with this ad.

Enough already. We need a lawmaker, not a serial lawbreaker. https://t.co/6CCRsgsYd0

Hunter, the embattled congressman who is accused of using $250,000 in campaign funds for personal expenses, is running for a sixth term in California’s 50th District. Despite the allegations, which Hunter denies, he is still expected to hang on to the seat in the heavily Republican San Diego district.