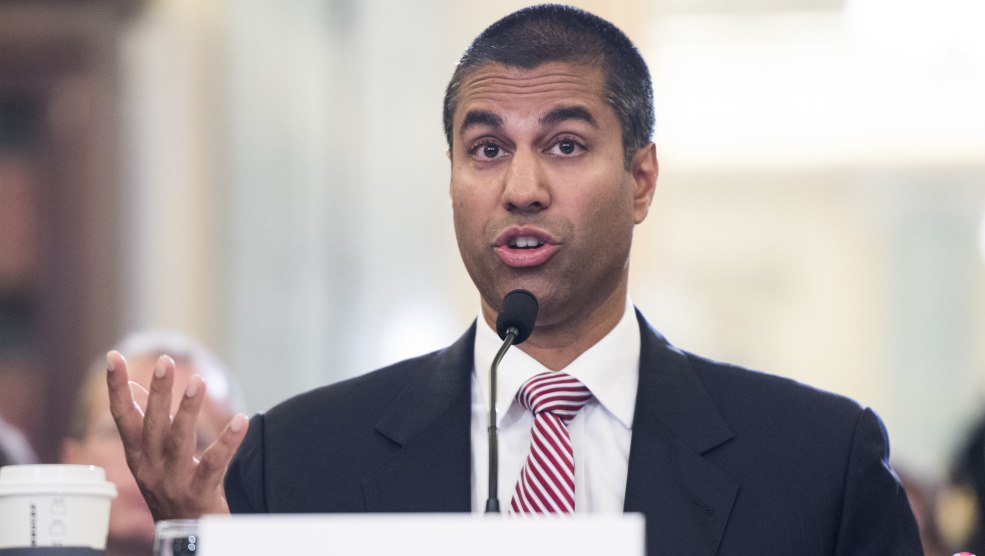 FCC Commissioner Ajit Pai defended his role in the FCC's fake claims it had been hit with a DDoS attack in front of the Senate Commerce, Science, and Transportation Committee.Bill Clark/CQ Roll Call/Newscom via ZUMA

After a scandalous few weeks for his agency, the chair of the Federal Communications Commission faced the the Senate Commerce Committee during its first oversight hearing in over a year. In the majority-Republican commission, Democrats took advantage of the opportunity to attack Chairman Ajit Pai for his role in asserting that the agency had been hit by a distributed denial of service (DDoS) attack in May 2017, instead of simply having its servers overwhelmed by a public response. A recent report by the agency’s investigator general said the agency’s claim of the attack, which is a federal crime, was untrue.

The problem began in May 2017, with an episode of Last Week Tonight With John Oliver in which the comedian asked viewers to “revive net neutrality”—a request he had made during the 2014 fight over the policy as well. The FCC had claimed that an onslaught of comments from bots following the segment had overwhelmed the agency’s comment system, causing it to crash. Skepticism about the claims grew when the FCC declined to provide any evidence of the bots to reporters at Gizmodo, Ars Technica, and BuzzFeed, calling claims the attack was faked “categorically false”in an email to reporters. Because DDoS attacks are federal crimes, a federal investigation was launched.

Pai told the Senate today that he was first made aware that former Chief Information Officer David Bray’s initial findings might be incorrect when the OIG informed him in January about the investigation. They had found that the crash was caused by an increase in authentic public comments, not a DDoS attack. The report reaffirmed Pai’s assertions that the blame for the false claims lay solely on Bray and was not an intentional misleading of the public orchestrated by the agency.

Emails obtained by Gizmodo and the watchdog group American Oversight in June show that Bray made similar claims about an alleged 2014 DDoS attack that was never publicly reported. Bray stepped down from his role in August 2017 for reasons apparently unrelated to the incident.

Pai insisted he had repeatedly questioned the CIO’s findings before reporting it to the public but found no reason to disbelieve Bray’s initial report. He added that he made the decision that the benefits of publicly discussing the investigation by the inspector general before it was completed outweighed the risks of compromising it.

“It was very hard to stay quiet,” Pai said, of the eight months he knew about the report, “because we knew it vindicated what we had said.”

“I guess what I’m looking for is some measure of accountability as the chairman,” Schatz retorted.

The hearing also included a discussion concerning the recent withdrawal of Tribune Media from its merger with the Trump-friendly Sinclair Broadcast Group. After questioning from Sen. Richard Blumenthal (D-Conn.), Pai admitted that in mid-July, before the merger collapsed, White House Council Don McGahn had called him to ask about the status of agency’s review of the merger. Pai emphasized that “no one from the White House has called to express a view” and the call was merely a “status inquiry.” But he had previously told the House in a July 25 oversight hearing that he had not been contacted by the White House at all and would disclose any contact if legally required. Blumenthal asked that a written record of the conversation be submitted to the committee after the hearing.

The last time the Senate called in all four FCC commissioners for an oversight hearing was in October 2017 to discuss the agency’s role in free speech and freedom of the press. Sen. Maggie Hassan (D-N.H.), who, along with Schatz and two other Democrats on the committee, had been instrumental in organizing the previous hearing, asked if any of the commissioners wanted to comment on the president’s continuing attacks on the press. “Do you believe the president’s rhetoric is harmful to the values enshrined in the First Amendment?” she asked. All three Republican members of the commission declined to respond, but the single Democratic commissioner, Jessica Rosenworcel, said, “This is simple, this is easy. Yes it’s harmful.”

The other commissioners acknowledged the agency was responsible for protecting the First Amendment. “The First Amendment acts as a restraint on the government,” said Commissioner Brendan Carr. “The whole purpose of the First Amendment is to protect strong, robust, sometimes rough rhetoric.”
Chairman Pai also addressed questions of free speech as they related to the FCC’s recent fining of a pirate radio station that was a flagship broadcaster for InfoWars‘ Alex Jones. While Jones has recently been suspended by platforms including Facebook and YouTube for repeatedly violating rules about hate speech, Pai insisted the move against the radio station was an enforcement of the agency’s piracy laws and had “nothing to do with the content pirate radio stations air.”
Correction: An earlier version of this article mistakenly stated that a House oversight hearing took place in August. It has been updated to reflect that fact that the hearing took place on July 25th.