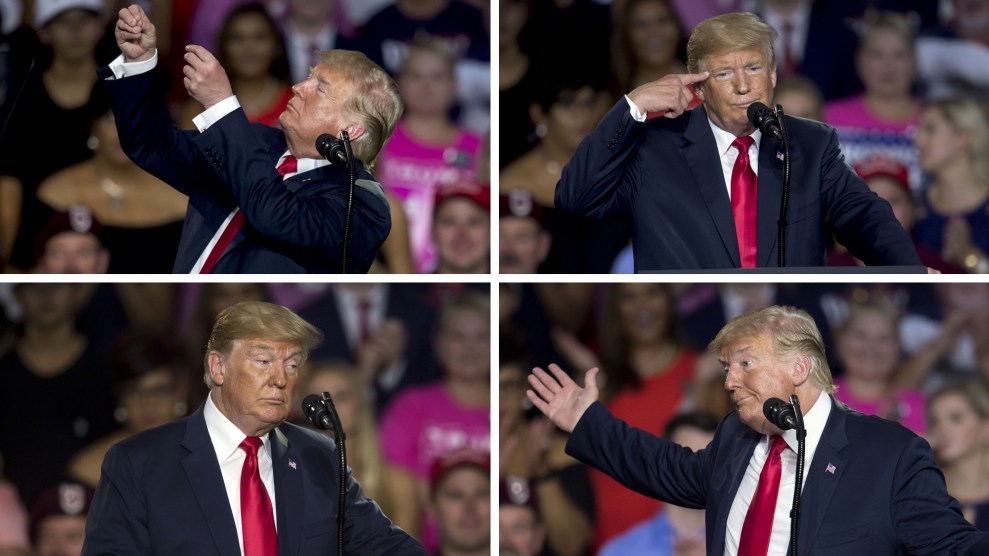 Just before Christmas, President Donald Trump signed a tax bill that will raise the national debt by nearly $2 trillion over 10 years, according to the Congressional Budget Office, while likely saving him and his heirs millions of dollars per year. Eight months later, the president is claiming on Twitter that his aggressive tariff program will allow the United States to start paying off some of its $21 trillion worth of debt.

..Because of Tariffs we will be able to start paying down large amounts of the $21 Trillion in debt that has been accumulated, much by the Obama Administration, while at the same time reducing taxes for our people. At minimum, we will make much better Trade Deals for our country!

The Washington Post estimates that Trump’s tariffs on $85 billion of foreign goods will raise about $21 billion at most, or about 0.1 percent of the current national debt. Trump has also pledged $12 billion to help farmers who are being hurt by his protectionism, further reducing any potential savings. But at the same time, the tariffs are raising production costs for American companies. That will either lead to lower profits or higher costs for consumers.

The tax cut Trump signed into law in December is now expected to increase US debt by about $1.9 trillion between 2018 and 2028. That is about $433 billion more than the Congress’ Joint Committee on Taxation projected before the tax bill became law. (Trump administration officials repeatedly claimed without evidence that the tax bill would pay for itself.)

As I reported last December, many provisions of the tax bill are likely to save the Trump family itself millions of dollars in the coming years:

First, there’s the reduction in the income tax rates. Instead of paying 39.6 percent on their income, top earners will now pay 37 percent. But for some Americans, including Trump, the real rate will actually be far lower. That’s because the GOP legislation allows many business owners to deduct 20 percent of their income. This new deduction—for so-called “pass-through” businesses whose profits are taxed as individual income—reduces the top rate to below 30 percent. Trump’s most recent financial disclosure form lists ties to more than 500 businesses that collectively make up the Trump Organization. His attorneys said last year that almost all of them are pass-throughs…

Overall, there is almost nothing in the legislation that would hurt Trump. Six tax experts told the Washington Post that he would “undoubtedly benefit” from the final bill. The one exception is likely to be a new $10,000 limit on deducting state and local tax payments from federal taxes. Daniel Shaviro, a tax law professor at New York University, said that he’s “not even aware of a single provision in the bill that disadvantages [Trump] or his family, other than the change to state and local tax deductibility.”

None of this has stopped Trump from telling supporters that “I think my accountants are going crazy right now.” He added that, unlike some of his wealthy friends, he didn’t care. For him, passing the tax bill was a “higher calling.”