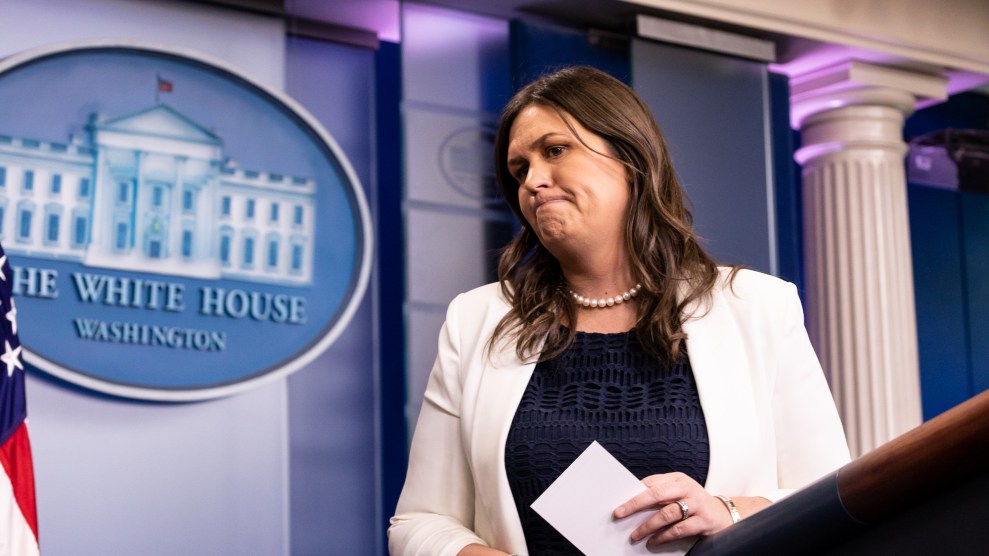 Original story: White House press secretary Sarah Huckabee Sanders repeatedly declined on Thursday to say that the press was not the enemy of the American people, after President Donald Trump gave the media that label on Sunday and his daughter Ivanka refuted it on Thursday.

Instead, Sanders listed the ways the media had wronged her and the administration, accusing reporters of making “personal attacks without any content other than to incite anger.” Sanders’ listed grievances included the April White House Correspondents’ Association dinner, where comedian Michelle Wolfe compared her to Aunt Lydia, the anti-feminist villain of The Handmaid’s Tale.

“I think the president has made his position known,” Sanders told CNN’s Jim Acosta, who had asked her to say the press was not the enemy of the people after she ignored a similar question. “It’s ironic, Jim, that not only you and the media attack the president for his rhetoric, when they frequently lower the level of conversation in this country.”

Complete exchange between @Acosta and @PressSec on whether or not the press is the enemy or the people.

When Acosta pointed out her failure to answer the question, she responded that she speaks on behalf of Trump and that “he’s made his comments clear.”

Acosta tweeted that he walked out of the press briefing, which he called “shameful.” On CNN, Acosta said he felt badly that Sanders had been “yelled at at a restaurant in Virginia… and a comedian at the correspondent’s dinner said some unpleasant things about her.” But he added that Sanders should read and hear the things that are said to the press on a regular basis. At a Trump rally in Tampa on Tuesday, supporters of the president shouted at the press corps, chanting “CNN sucks” and flashing middle fingers at Acosta as he tried to speak on-air.

"I'm tired of this," @Acosta says. "It is not right" to call the press the "enemy of the people." Watch this clip. pic.twitter.com/rcqB5FiSCy