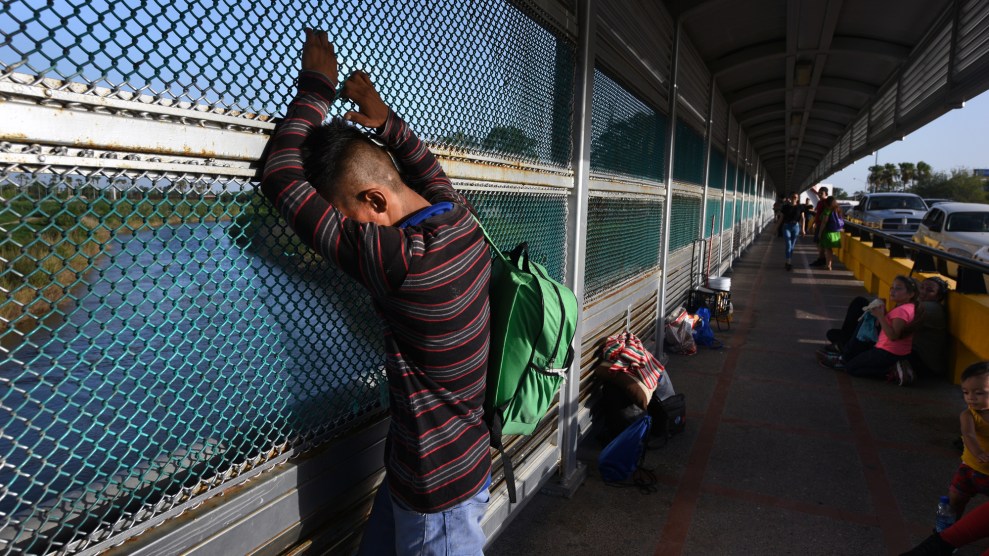 Luis Miguel Montimo, 32, waits on the Gateway Bridge in Matamaros, Mexico in July with his girlfriend and one-year-old-son. He said his ex-wife started dating a gang member and the gang torched his home killing his 2 children inside.Carol Guzy/ZUMA

In the early morning hours on Monday, Mexican officials approached a group of about 30 migrants sleeping on the B&M Bridge between Brownsville, Texas, and Matamoros, Mexico. The officials asked for their documents to see who had permission to be in Mexico. About a dozen migrants did not, and the Mexican officials detained them, according to recordings of interviews with migrants who witnessed the scene and advocates along the border.

Removing people from the bridges over the Rio Grande would represent a significant escalation in efforts to prevent asylum-seekers without Mexican transit visas from legally entering the United States at official ports of entry.

The group of migrants was sleeping on the B&M Bridge because US officials are now forcing asylum-seekers to wait—often for days—before they are allowed to set in foot in the United States and request protection from persecution. The removals come despite the fact that the Trump administration has repeatedly told asylum-seekers to come to ports of entry instead of crossing the border without authorization.

“They took them,” migrants who remained at the bridge told her.

CBP disputes that it is working with Mexican officials to remove people from bridges. “Mexico has its own laws and CBP would not ask them to do anything on our behalf,” a CBP spokesperson told Mother Jones in an email. The spokesperson also wrote, “Mexican immigration authorities screen third country nationals in accordance with their sovereign laws and policies. If a traveler is determined not to have legal status in Mexico, Mexican immigration authorities would will [sic] take the appropriate action.”

Under a policy launched in May, armed CBP officials now stand just behind the border line on bridges across the southern US border. They wave almost all pedestrians through after checking their documents. But asylum-seekers are told they must wait until there is room to process them. That could be hours, days, or more than a week. The asylum-seekers—exhausted and often traumatized by weeks- or months-long journeys from everywhere from Central America to Africa—have relied on donations from passersby and volunteers to make it through the wait.

On the B&M Bridge, CBP officials stand under a temporary canopy while the migrants in front of them try to endure nearly 100-degree heat. When I visited the bridge in late June, Mexican officials did not bother the asylum-seekers on the bridge, who were able to come right up to the US border at the center of the bridge. Mexican officials did not seem to be making any effort to detain migrants who were doing everything in their power to leave their country.

Glady Cañas Aguilar, a Matamoros resident who has been going to to the bridge almost every day to help asylum-seekers, says migrants on the bridge told her that three Central American families and two Cubans were removed from the bridge around one in the morning on Monday. Kathy Bougher, an activist from Denver, visited the B&M Bridge over the weekend. When she returned on Monday, she asked where the missing migrants had gone. “They took them,” migrants who remained at the bridge told her.

The people at the B&M Bridge were already asleep when Mexican officials arrived in the night, according to two Cuban women who witnessed the scene. (Bougher provided recordings of her interviews to Mother Jones.) Those without visas were taken away, the women told Bougher. Two Hondurans also described the removals in a separate interview with Bougher.

“You get to do all the dirty work and the US doesn’t get blamed, right?”

Upon entering Mexico, asylum-seekers can request a 20-day transit visa that allows them to travel to the US border. But many migrants do not get them, particularly those traveling with smugglers known as coyotes who have little interest in delaying trips north. Harbury says that on the McAllen bridge, about 90 minutes from Brownsville, Mexican officials have told her they’re screening to make sure people have proper documentation and that it’s their job to detain them if they don’t. When CBP tells them about people who get onto the bridge, “The Mexicans actually go up and grab them and drag them back into Mexico,” she says. “It’s insane.”

“You get to do all the dirty work and the US doesn’t get blamed, right?” she recalls asking Mexican officials. They agreed, she says, and when she criticized the US policy, one flashed a thumbs-up sign in agreement with her. (Harbury recently sparked international outrage at the Trump administration’s family-separation policy by giving ProPublica audio of separated children crying at a CBP facility.)

Harbury is now helping a Central American mother who was told to wait by US officials when she made it to the midpoint of the McAllen bridge. There, Harbury says, a Mexican official appeared and talked with someone from CBP. The Mexican official then took her and her four children away. Harbury says the mother had a receipt from applying for a transit visa but headed north before it was approved. She was detained for a week in Mexico before being released back into Mexico with her kids, Harbury adds.