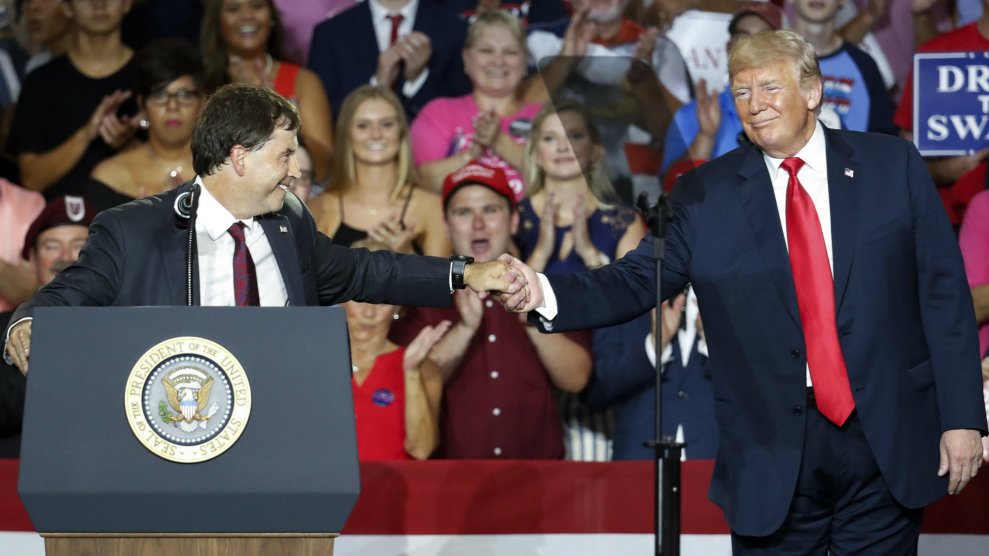 Republicans have more cause for concern about their prospects in November following Tuesday’s special election in a deep-red congressional district in Ohio. With all precincts reporting, Republican Troy Balderson—whose campaign was buoyed by more than $6 million in outside spending—clung to a narrow lead over Democrat Danny O’Connor.

The 12th Congressional District, a largely white and highly educated portion of the Columbus suburbs that’s shaped like the Nike Swoosh, is the latest Republican bastion where Democrats have made an unexpectedly strong showing. President Donald Trump carried the district by 11 points in 2016, an even greater margin of victory than Mitt Romney’s in 2012. Republicans have held the seat since 1982.

The special election was held to replace Rep. Pat Tiberi (R), who retired midway through his term to head the Ohio Business Roundtable. Early polls favored Balderson, but the race tightened as Election Day approached. Since the purpose of the special election was only to determine who would serve out the remainder of Tiberi’s term, Balderson and O’Connor will face off again in November.

The unexpectedly close contest doesn’t just have Republicans squirming. Prognosticators on both sides saw the race as an indicator of the House’s fate come November. In particular, the race was viewed as a gauge of whether Trump will help or hurt his party’s prospects and as a proving ground for the campaign messaging Republicans plan to use nationwide.

Troy Balderson, running for Congress from Ohio, is in a big Election fight with a candidate who just got caught lying about his relationship with Nancy Pelosi, who is weak on Crime, Borders & your 2nd Amendment-and wants to raise your Taxes (by a lot). Vote for Troy on Tuesday!

Trump and Vice President Mike Pence traveled to Ohio to campaign with Balderson. At a rally last Saturday, Trump showered praise on the Republican candidate and attacked O’Connor, calling him “Danny Boy” and saying, “Nancy Pelosi controls Danny O’Connor, whoever the hell that is.”

O’Connor, 31, is the county recorder for Franklin County. Balderson, 56, is a former car dealer and current member of the Ohio State Senate. Groups supporting Balderson poured more than $6 million—five times what O’Connor’s backers spent—into the race, much of it to fund a barrage of advertisements that portrayed O’Connor as weak on border security and in favor of middle-class tax hikes.