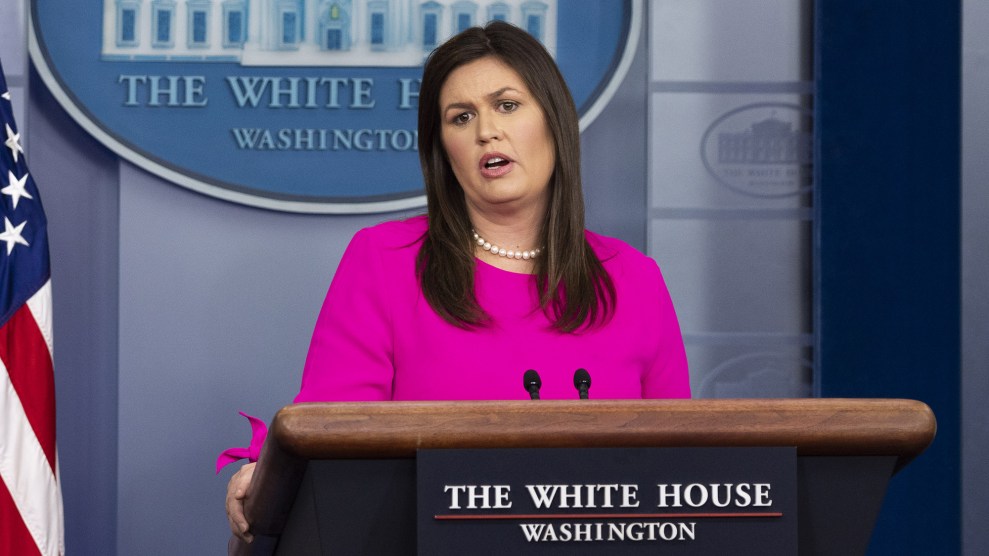 White House press secretary Sarah Huckabee Sanders was put in the awkward position Wednesday of explaining President Donald Trump’s bizarre assertion that people need to present photo identification to buy groceries. Trump was right, she claimed, because you need an ID to “buy beer and wine.”

Trump made the claim at a rally in Florida on Tuesday evening while defending voter ID laws, which in some states require a photo ID in order to cast a ballot. These laws have been shown to prevent poor, elderly, young, and minority people from voting.

At Wednesday’s press briefing, Sanders defended Trump. “If you buy beer and wine, you’re certainly going to show your ID,” Sanders said, adding, “I’m pretty sure that everybody in here who’s been to a grocery store that’s purchased beer or wine has probably had to show their ID.” But Trump didn’t say anything about alcohol, and his comments were widely perceived as evidence that the billionaire has not done his own grocery shopping in a long time.

White House Press Sec. Sanders gives the example of needing an ID to buy alcohol when asked about President Trump’s comment that people need an ID to buy “groceries.” pic.twitter.com/AplFS8Dy0s

During the same briefing, Sanders was asked whether the president still believes that millions of people vote illegally in 2016—an unfounded claim Trump has made repeatedly. Sanders responded that “even if there are 10 people that are voting illegally, it shouldn’t happen.”