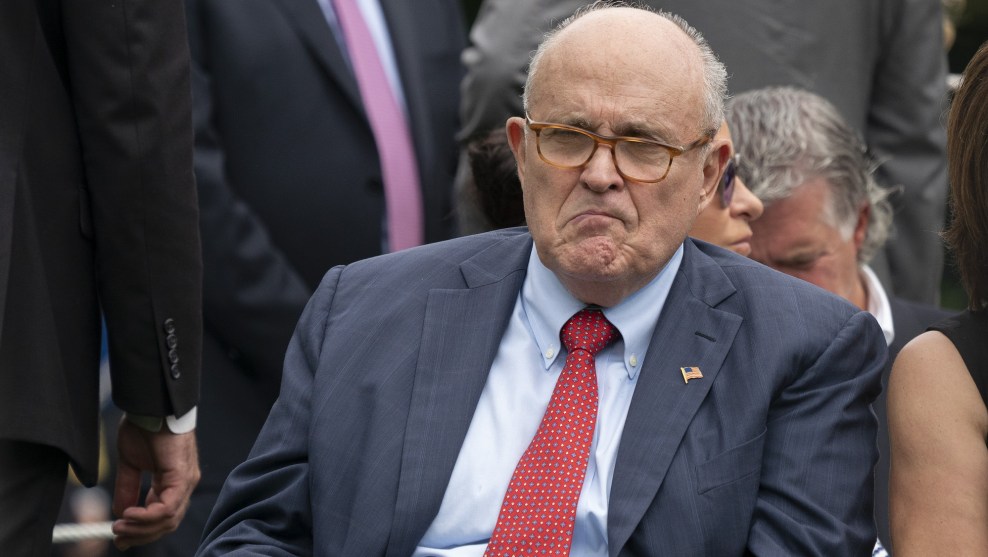 Rudy Giuliani at a White House event on May 30, 2018.Chris Kleponis/CNP via ZUMA Wire

Rudy Giuliani acknowledged this week that he was paid to write a letter attacking a Romanian anti-corruption campaign supported by the US State Department, a striking move by a lawyer busy defending President Trump against criminal allegations at home. Giuliani’s ham-handed intervention highlights his ongoing and undisclosed work for foreign interests, including those seeking to influence his most prominent client.

In an August 22 letter to Romanian President Klaus Iohannis, Giuliani criticized an anti-corruption campaign in the country as excessive. Using language that mimics his attacks on Special Counsel Robert Mueller’s burgeoning investigation into potential coordination between the Trump campaign and Russia, he faulted Romania’s anti-corruption agency for exceeding its mandate through “intimidation of judges, defense lawyers, and witnesses; unconstitutional phone tapping; forced confessions; and, unfair judicial processes.” Giuliani suggested Romania grant amnesty to officials convicted “through the excesses” of Romanian prosecutors.

Giuliani told Politico that he wrote the letter in exchange for a payment from Freeh Group International Solutions, headed by former FBI Director Louis Freeh. (He declined to say how much he was paid.) Freeh’s consulting firm represents Gabriel Popoviciu, a Romanian real estate mogul facing seven years in prison following a fraud conviction. According to Romanian media reports and US sources, the firm also represents Alexander Adamescu, the son of late Romanian mogul Dan Adamescu, who died in 2017 while serving a four-year prison sentence for bribing judges. Alexander Adamescu has also reportedly been investigated by Romanian prosecutors. The Freeh Group did not respond to a request for comment.

Freeh and Giuliani’s advocacy dovetails with efforts by Liviu Dragnea, head of the country’s ruling Social Democratic Party and the most powerful politician in Romania’s parliamentary government, to defang Romania’s corruption crackdown. Dragnea is appealing a three-and-a-half year prison sentence handed down in June after he was convicted of corruption. He was also convicted of electoral fraud in 2015. Dragnea quickly touted Giuliani’s letter, written on the letterhead of his company, Giuliani Partners, as a sign “that trust in the Romanian justice system is seriously shaken when it comes to foreign partners and foreign investors.”

Giuliani contends he sent the letter as a private citizen. But critics in Romania and the United States said it appeared likely Dragnea or other Romanians facing corruption charges pressed Freeh to seek Giuliani’s intervention due to the former mayor’s connection to Trump.

Dragnea and other leaders in the region “are always looking for some sort of validation from the United States that what they are doing is right, that they have lines into the administration,” says an American official has worked in the region and who asked not to be named due to the sensitivity of the matter. “A lot of this is for domestic Romanian consumption, to prove they are relevant in the US.”

Dragnea has previously had mixed success accessing Trump insiders. In January 2017, Elliott Broidy, then a major GOP fundraiser, brought Dragnea and another Romanian lawmaker as guests to Trump’s inauguration and introduced them to the president, McClatchy has reported. Broidy owns Circinus, a defense firm that was seeking contract dollars from Romania at the time. The firm won Romanian approval to bid for business there but has yet to be awarded any actual contracts, a person close to Broidy said. Last fall, Dragnea’s party also paid $100,000 to a DC firm, Madison & Company, for help arranging meetings for Dragnea with House Speaker Paul Ryan and Vice President Pence, according to the firm’s filings. The meetings never took place.

Broidy stepped down this year as a deputy finance chairman of the Republican National Committee after admitting that he paid hush money to a Playboy Playmate who said he impregnated her during an affair. He has also faced allegations of influence peddling based on hacked emails that showed him using his access to Trump to offer help to foreign governments, particularly the United Arab Emirates, from whom he sought defense contracts or fees. Broidy is reportedly is under investigation by the Justice Department.

Giuliani’s letter landed awkwardly in Romania, where Iohannis’ firing last month of the chief prosecutor of Romania’s anti-corruption directorate, a step Dragnea backed, has provoked large protests, including an August 10 demonstration in Bucharest that resulted in violence that injured 400 people. Giuliani’s missive drew denunciation by Romanian officials including George Maior, the Romanian Ambassador to the United States. Maior was recalled to Bucharest after he said the former mayor’s letter resulted from lobbying by “figures who have justice problems.” The State Department in a statement distanced itself from Giuliani’s claims, reiterating US support for the county’s corruption crackdown.

“Rudy Giuliani does not speak for the US government on foreign policy,” a State Department official told the Washington Post.

Giuliani was reportedly nixed as a candidate for Secretary of State under Trump in part due to his problematic client list. He has worked for the government of Qatar, appearing in April at a Miami event arranged by representatives of the country’s sovereign wealth fund. Early last year, Giuliani met with Turkey’s autocratic president Recep Erdogan, in a bid to negotiate a deal through which the Justice Department would drop its prosecution of Giuliani’s client, Turkish gold trader Reza Zarrab, who was accused of violating US sanctions on Iran. Zarrab later pleaded guilty and implicated officials in Erdogan’s government in the scheme. His testimony helped prosecutors win the conviction of an executive at Turkey’s majority state-owned bank; the official was sentenced in May to 32 months in prison. Erdogan has denounced the prosecution, and the conflict factors into a breakdown in US-Turkey relations.

Both Giuliani and Freeh have accepted fees for advocating for the M.E.K., an Iranian opposition group, formerly aligned with Saddam Hussein, that was once designated as a terrorist group by the State Department. (It was removed from this list in 2012.) Last month, Giuliani told the Washington Post he has other unnamed clients in Brazil and Columbia. He claims he does not need to register with the Justice Department as a foreign agent because he does not directly lobby the US government. (The Foreign Agents Registration Act requires anyone “attempting to influence US public opinion” on behalf of a foreign client, regardless of whether they lobby lawmakers, to register, with certain exceptions. In terms of Giuliani’s Romanian advocacy, he may contend that he was seeking to influence Romanian, not American, policy.)

Giuliani’s representation of Trump has been widely criticized. But his Romanian letter highlights a different problem. Giuliani claims that he gives Trump not just legal but political and policy advice. He does so while continuing to work for other clients. In other words, the president may want to ask Giuliani where else he is sending letters.