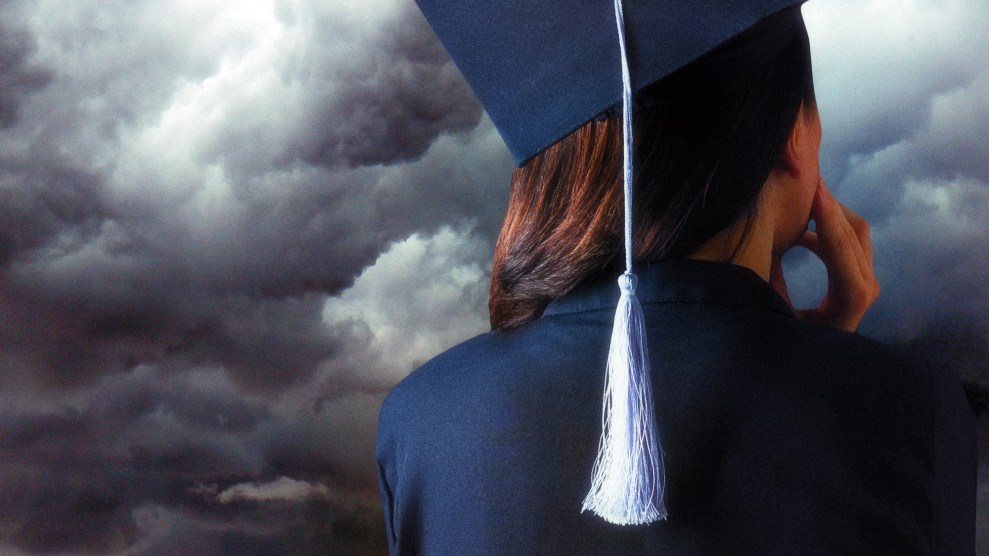 On this week’s episode of the Mother Jones Podcast, the rage-inducing inside story of America’s student debt machine: how the nation’s flagship loan forgiveness program is failing the very people it’s meant to help. You’ll hear disturbing firsthand accounts of how the mismanaged Public Service Loan Forgiveness has left participants swimming in debt, even as they diligently keep abreast of new payments—stories that should be outliers, but turn out to be all too common.

“At this point, I’m kind of resigned to the fact that I don’t have any control over this process at all,” Leigh McIlvaine tells the Mother Jones Podcast. “I still owe $70,000 on my original $70,000 balance.”

McIlvaine is one of the several debt-soaked workers that reporter Ryann Liebenthal interviewed for Mother Jones‘ latest magazine cover story. By the time she finds herself at the end of the forgiveness program, McIlvaine will have paid close to the original amount she borrowed. “Yet when we talk about her forgiveness,” explains Liebenthal, “it’ll sound like she got $70,000 of forgiveness—as though she kind of took the government for a ride.”

Also on the show: DC Bureau Chief David Corn tries to make sense of that bizarre Roger Stone video on Instagram, where the former Trump adviser denies the president had any prior knowledge of the Wikileaks dump of Democratic emails. Stone says media outlets might be preparing to publish claims they overheard him giving a heads up to the President about Wikileaks’ actions. “If Roger Stone knew this, who else knew this?” Corn asks. “And was there any—here comes the word—collusion?” Corn also explains the implications of Paul Manafort—Trump’s former campaign chair who was recently found guilty of  tax and bank fraud—having reportedly discussed a plea deal before his second trial in mid September.

You can listen to these conversations on the Mother Jones Podcast and subscribe using any of the following services: