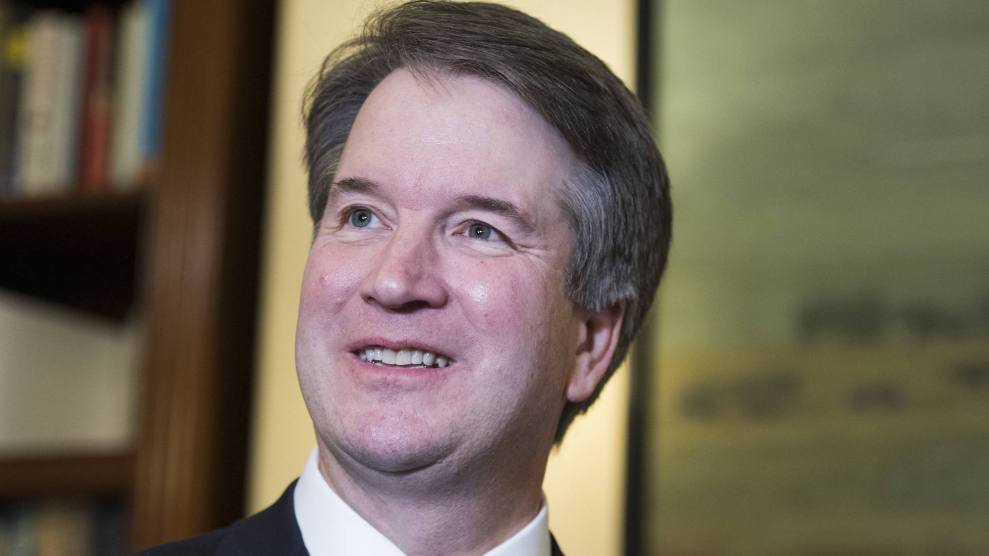 Before Supreme Court nominee Brett Kavanaugh became a federal appellate judge, he spent his early legal career working in Washington as a lawyer for Ken Starr, the independent counsel appointed to investigate President Bill Clinton’s convoluted Arkansas real estate deal known as Whitewater. The investigation steadily grew in scope, eventually focusing on the president’s relationship with White House intern Monica Lewinsky. Kavanaugh was deeply involved in that angle of the investigation, particularly in delving into precisely what sexual activities Clinton and Lewinsky engaged in within the confines of the Oval Office. A 1998 memo released on Monday as part of a Freedom of Information Act request from the nonprofit group Fix the Court shows just how much specific, intimate detail Kavanaugh sought to elicit from Clinton about his extramarital affair.

In the memo to Starr, Kavanaugh revealed significant hostility towards Clinton regarding his behavior with Lewinsky and recommended that Starr play hardball when he eventually interviewed Clinton. Kavanaugh wrote:

After reflecting this evening, I am strongly opposed to giving the President any “break” in the questioning regarding the details of the Lewinsky relationship — unless before his questioning on Monday, he either (i) resigns or (ii) confesses perjury and issues a public apology to you. I  have tried hard to bend over backwards and to be fair to him and to think of all reasonable defenses to his pattern of behavior. In the end, I am convinced that there really are none. The idea of going easy on him at the questioning is thus abhorrent to me…

He should be forced to account for all of that and to defend his actions. [Emphasis in original.] It may not be our job to impose sanctions on him, but it is our job to make his pattern of revolting behavior clear — piece by painful piece — on Monday. I am mindful of the need for respect for the Office of the President. But in my view, given what we know, the interests of the Office of the President would be best served by our gathering the full facts regarding the actions of this President so that the Congress can decide whether the interests of the Presidency would be best served by having a new President. More to the point: Aren’t we failing to fulfill our duty to the American people if we willingly “conspire” with the President in an effort to conceal the true nature of his acts?

If Monica Lewinsky says that you inserted a cigar into her vagina while you were in the Oval Office area, would she be lying?

If Monica Lewinsky says that you had phone sex with her on approximately 15 occasions, would she be lying?

If Monica Lewinsky says that on several occasions in the Oval Office area, you used your fingers to stimulate her vagina and bring her to orgasm, would she be lying?

If Monica Lewinsky says that she gave you oral sex on nine occasions in the Oval Office area, would she be lying?

If Monica Lewinsky says that you ejaculated into her mouth on two occasions in the Oval Office area, would she be lying?

If Monica Lewinsky says that on several occasions you had her give her oral sex, made her stop, and then ejaculated into the sink in the bathroom off the Oval Office, would she be lying?

If Monica Lewinsky says that you masturbated into a trashcan in your secretary’s office, would she by lying?

This sort of prurient, self-righteous focus on sex over perjury and other legal issues that were at the heart of the independent counsel’s investigation is exactly why the Starr report ultimately came under harsh fire from critics for missing the forest for the trees. Kavanaugh’s central role in the Lewinsky debacle calls into question his political judgement, if not his legal judgment, and it’s likely to become the main focus of his confirmation hearing next month.