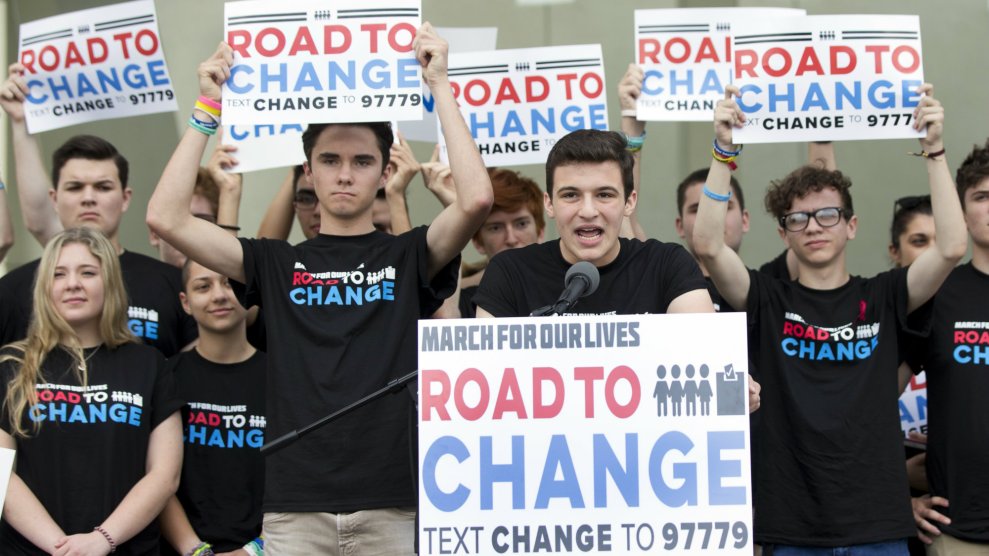 After graduation, Parkland shooting survivors announce plans for their Road To Change tour, a multistate bus tour to "get young people educated, registered and motivated to vote."Wilfredo Lee/AP

Six months ago, the debate around gun safety took a sharp turn. A group of students from Marjory Stoneman Douglas High School in Parkland, Florida, mourning the recent deaths of 17 people who had been shot and killed at their school, took to the national stage and said they have had enough with all the empty posturing that followed tragic school shootings. And a rare thing happened: the intractable politics around guns showed signs of change.

Before Parkland, it was relatively safe for many Democrats to oppose gun reform, but now they—and even some Republicans—face an onslaught of criticism if they do. The decades-long efforts by many activists have gained momentum with gun safety legislation passing in several states throughout the country. Meanwhile, March for Our Lives student activists are often seen as the kids who will “save us all.”

Mother Jones caught up with several of the Parkland student leaders in New York right before they went to Newtown to finish up their Road to Change voter-registration tour of the country. In an exclusive, intimate roundtable for the Mother Jones Podcast, they talked about the pressures of those expectations and being held up as “superheroes” or “saviors.” Jaclyn Corin and Matt Deitsch, from Parkland, and Alex King, an 18-year-old activist with March for Our Lives from Chicago, tell Mother Jones about how they spent their summer vacations touring the country to fight against NRA-backed politicians and campaigning to make NRA money “toxic.”

“We did specifically target areas with low youth turnout in elections that could be taken away from these corrupt politicians,” Deitsch explains. “This is all strategic, because if the young people turn out in these states…they get to pick every single level of their government.”

In fact, the activists point out the broad support for gun safety measures reflects the shortcomings of our political system. Some notable reforms, like requiring background checks, have occurred in Florida, Vermont, and New Jersey since the Parkland shooting last February. March for Our Lives Organizers say nationwide reform in the near future also should be feasible. “I think if we don’t have universal background checks in the next six months, our country has absolutely failed us as people.”

As they toured the country trying to register young voters, they found that America isn’t as divided on gun safety as it may appear. “It’s weird that we even talk about counter-protestors,” King tells Mother Jones, “almost eight out of ten of them agree with us.” Often those who came out to demonstrate against their message were misinformed and thought this was a debate about the Second Amendment.

Also on this week’s special episode of the podcast, we take you to the last stop on the Road to Change tour in Newtown, Connecticut, where 27 people, many of them children, were killed in a shooting rampage at the Sandy Hook Elementary in December 2012. Also, a father, who lost his daughter during the Parkland shooting, tells us about what it was like to confront Florida Sen. Marco Rubio during a live, televised town hall.

You can listen to these revealing conversations on the Mother Jones Podcast and subscribe using any of the following services: