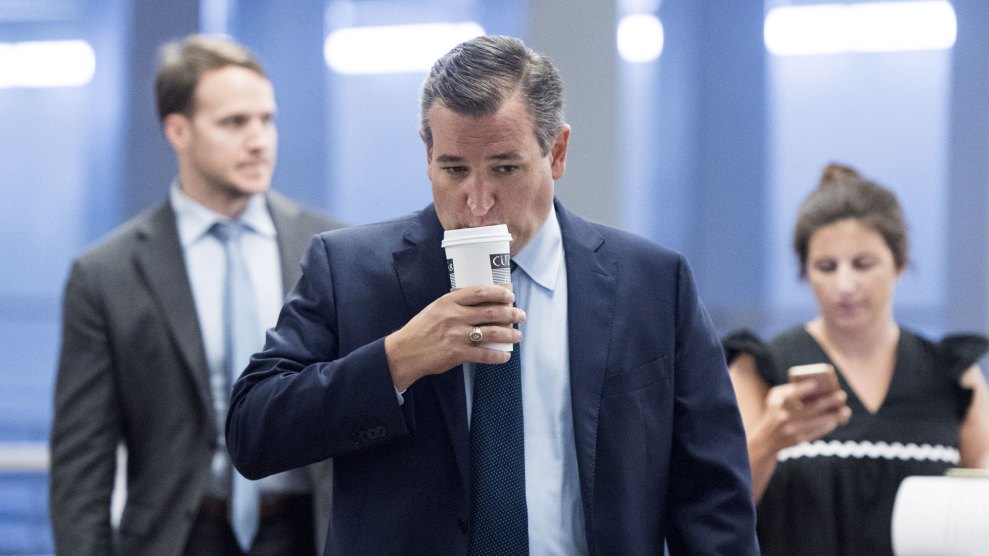 On Friday afternoon, President Donald Trump confirmed what Texas Republicans had been hinting for weeks—he’d be coming to the Lone Star State this fall to campaign for Sen. Ted Cruz:

I will be doing a major rally for Senator Ted Cruz in October. I’m picking the biggest stadium in Texas we can find. As you know, Ted has my complete and total Endorsement. His opponent is a disaster for Texas – weak on Second Amendment, Crime, Borders, Military, and Vets!

Trump’s visit to Texas is confirmation of what poll after poll has indicated—Cruz, the former tea party star, is in the race of his life against Democratic Rep. Beto O’Rourke. Even as Republican Gov. Greg Abbott appears to be cruising to reelection, Cruz is clinging to narrow, single-digit leads. One recent survey put him up just 1 point. In a place that hasn’t elected a Democrat statewide since the mid-1990s, O’Rourke has made inroads among the kinds of suburban voters who have long kept Texas red. But as the large numbers of potential Abbott–O’Rourke voters suggest, he’s also benefiting from the simplest of contrasts: Beto is easy to like, and Ted Cruz is easy to hate.

It’s fitting, then, that Trump is coming to rescue Cruz, because no one has ever played to voters’ dislike of Cruz quite as effectively as Trump did during the 2016 Republican presidential primary. Trump branded his opponent “Lyin’ Ted.” He touted a National Enquirer story alleging that the senator’s father, Rafael Cruz, had participated in the assassination of President John F. Kennedy. And most infamously, he promised to “spill the beans” on the senator’s wife, Heidi Cruz. In another tweet, he contrasted an unflattering photo of her with a glamor shot of Melania Trump:

At a press conference the next day in Wisconsin, Cruz—acknowledging he wasn’t usually such an emotional open-book—addressed the future president directly: “Donald, you’re a sniveling coward.”

During his speech at the 2016 Republican National Convention, Cruz told voters to vote their conscience and refrained from endorsing Trump. The next morning he defended his decision to a room full of angry Texas delegates; he couldn’t in good conscience back a candidate who had disparaged his father and wife.

Then, a few months later, he allowed himself to be filmed at a local party office phone-banking with Trump-Pence signs in the background. Maybe, in the end, that’s what his conscience told him to do. Or maybe he’d just stopped listening to it.

Here's that video of #TedCruz working phone bank at GOP office in Fort Worth. This time with watermark for @dallasnews, the content owner. pic.twitter.com/7D4rTGcXJu