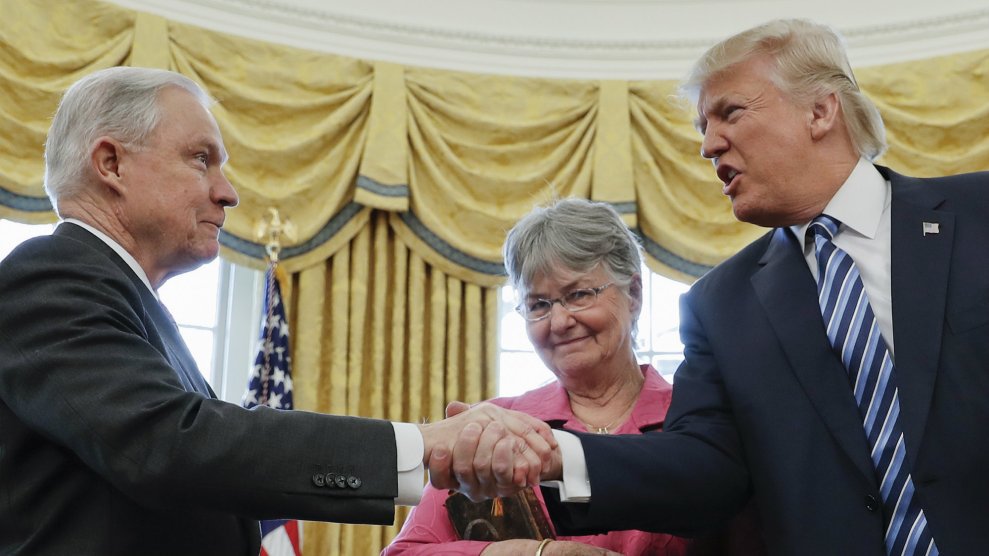 President Donald Trump on Saturday publicly excoriated his attorney general in a series of tweets about the Russian investigation, describing Jeff Sessions as “scared stiff and Missing in Action.”

Sessions has recused himself from the investigation into the Trump campaign’s contacts with Russia. The probe is being overseen by Deputy Attorney General Rod Rosenstein, who hired Special Counsel Robert Mueller after Trump fired FBI Director James Comey last year.

Trump’s latest comments come 10 days after the president sparked a major controversy by criticizing Mueller and publicly stating that Sessions “should stop this Rigged Witch Hunt right now.” At the time, White House Press Secretary Sarah Sanders insisted that Trump’s comments did not constitute obstruction of justice and that they were merely the president’s opinion, not orders for Sessions. But Saturday’s tweets make clear that Trump isn’t letting go of the matter and that he remains furious with Sessions for not intervening on his behalf.

The big story that the Fake News Media refuses to report is lowlife Christopher Steele’s many meetings with Deputy A.G. Bruce Ohr and his beautiful wife, Nelly. It was Fusion GPS that hired Steele to write the phony & discredited Dossier, paid for by Crooked Hillary & the DNC….

….Do you believe Nelly worked for Fusion and her husband STILL WORKS FOR THE DEPARTMENT OF “JUSTICE.” I have never seen anything so Rigged in my life. Our A.G. is scared stiff and Missing in Action. It is all starting to be revealed – not pretty. IG Report soon? Witch Hunt!

Trump’s Saturday tweets are a reference to reports this week that Bruce Ohr, a Department of Justice official involved in the Russia probe in 2016, frequently communicated with Christopher Steele—the former British spy and author of the famous dossier—and with Glenn Simpson, whose firm Fusion GPS hired Steele on behalf of Democrats. Ohr’s wife, Nellie Ohr—who Trump for some reason referred as “his beautiful wife, Nelly”—worked for Fusion.

This was the second Twitter fusillade that Trump fired at the Justice Department Saturday. Earlier in the day, Trump threatened “to get involved” to force the FBI to hand over the text messages of former FBI Deputy Director Andrew McCabe, who Sessions fired earlier this year.